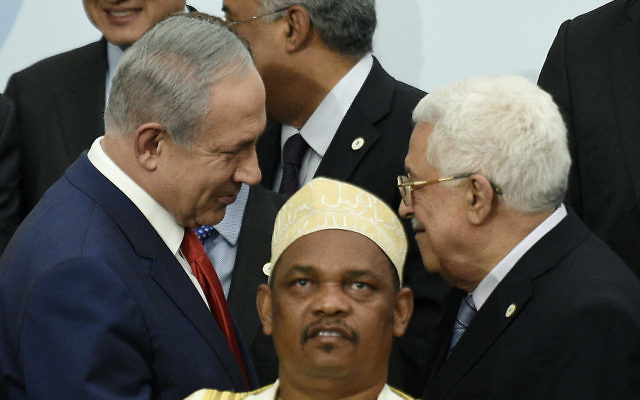 There has been much analysis of President Trump’s recent trip to the Middle East, most of it focused on the abundance of “optics” and the lack of substance. One thing is clear to me, however: Even though the president never uttered the words “two-state solution,” what he said and did points to that outcome. The question now is: Is there a way forward? I think there is but it will depend on the president’s willingness to meet two challenges: to change the conversation regarding Iran and to be patient in trying to bring about a two-state outcome.

The way forward depends on the president’s willingness to meet two challenges: to change the conversation regarding Iran and to be patient in trying to bring about a two-state outcome.

What now unites the U.S., the Gulf States and Israel is their common concern with the Iranian nuclear threat. The president has called the Iran nuclear deal “the worst deal ever” and vowed to “tear it up.” But he recently and quietly signed waivers of certain sanctions that have allowed the deal to stay in place.

I don’t agree with those who say the deal gives the Iranians the ability, indeed the right, to produce a nuclear weapon after the restrictions imposed by the agreement expire. As Max Singer, a Mideast expert, argued persuasively in a recent Wall Street Journal op-ed, the world has not signed off on such an agreement. He noted the agreement has one provision that states that it “will ensure the exclusively peaceful nature of Iran’s nuclear program,” and another that says: “Iran reaffirms that under no circumstances will Iran ever seek, develop or acquire nuclear weapons.”

When I pointed out these provisions to Gen. Amos Yadlin, who heads one of Israel’s leading think tanks, he acknowledged their presence in the agreement but said the countries who negotiated the deal will not have the political will to hold Iran to them. There lies the first challenge to Trump — to change the conversation from saying “the world gave Iran the right to have a nuclear weapon,” to saying “the agreement specifically forbade Iran from acquiring a nuclear weapon.” Subsequently, the president should marshal the support of the other signers of the deal to take action, including the possible imposition of new sanctions, to hold Iran to its promises.

At the same time, the president should closely monitor Iran’s missile program and its continuing support of terrorism and take action, perhaps including new sanctions, to counter these activities. This must, of course, be carefully done so as not to give Iran the excuse to claim a violation of the agreement and pull out of the deal. By taking these aggressive actions, the president can demonstrate to the Gulf States his commitment to challenging Iran’s activities.

Meeting the second challenge regarding moving toward an eventual resolution of the Israel-Palestinian issue will test the president’s ability to be patient — not one of his significant attributes — and to accept the reality that there is little or no chance for a final-status agreement between the parties at this time and, therefore, to urge the parties to take immediate actions to keep open the possibility of a two-state outcome in the future.

On the Israeli side, the most obvious step is a settlement freeze, but the makeup of the present coalition makes that option unlikely. There have been rumors of a new coalition with Isaac Herzog and the Zionist Union, but there are many obstacles, including the fact that the Labor Party will vote on July 4 to determine who will lead the party, and there are some in the party who vehemently oppose joining the government.

Most agree that the confluence of interests among the U.S., the Gulf States and Israel provides a meaningful opportunity to advance the possibility of an eventual two-state outcome.

Other ideas: Commanders for Israel’s Security, an organization made up of more than 250 retired IDF generals and their counterparts in the Security Services and the National Police, submitted a detailed plan to re-designate 3.3 percent of the West Bank from Area C (total Israeli control) to Area B (Palestinian civil — not military — control, including housing and zoning authority). This would serve to legalize 20,000 Palestinian housing units currently under threat of demolition. And it would not require the movement of one IDF soldier or one settler.

Also, Knesset member Anat Berko, a member of Netanyahu’s Likud Party, has called for separating some neighborhoods of east Jerusalem and placing them under Palestinian municipal responsibility. Most of these neighborhoods were never officially in Jerusalem’s jurisdiction.

On the Palestinian side, there has to be some movement toward tamping down, if not eliminating, the incitement that flows from the mosques, the schools and officials of the Palestinian Authority itself. It has been reported that the president “yelled at” Abbas for falsely claiming no involvement in the incitement. Most obvious is to eliminate funding that goes to the families of “martyrs” who killed Israelis. Also, revising textbooks and curriculum and ridding them of their anti-Israel content. Pressure on the PA from the president and the Saudis, the Egyptians and others will be necessary in order to bring this about.

Most agree that the confluence of interests among the U.S., the Gulf States and Israel provides a meaningful opportunity to advance the possibility of an eventual two-state outcome. The president needs to parlay this opportunity into the “ultimate deal.”

The author is a past chair of the Anti-Defamation League and the Conference of Presidents of Major American Jewish Organizations. The views expressed are his own.