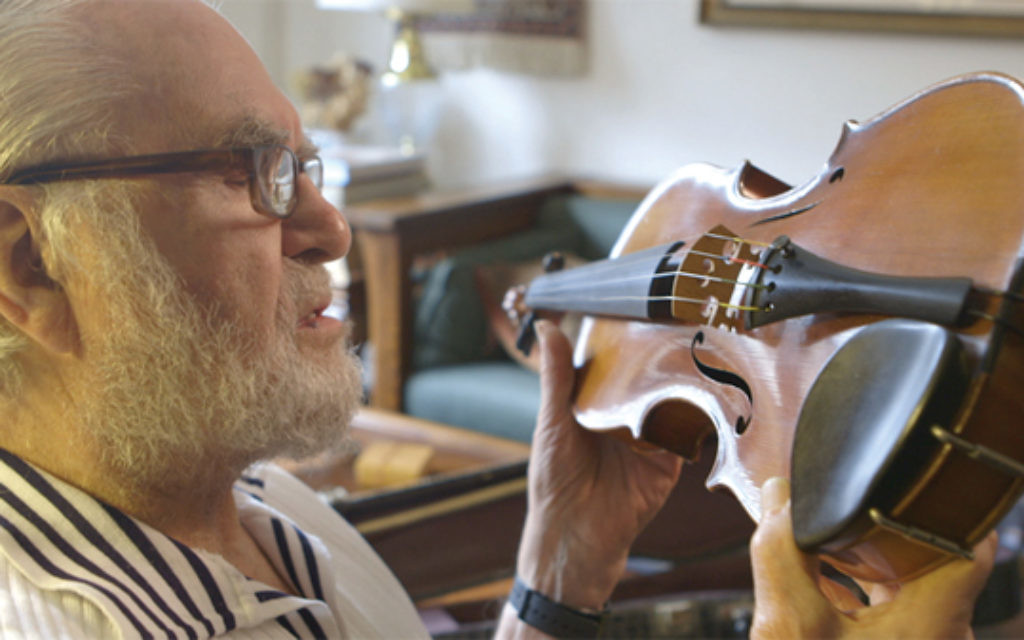 On the first day of WQXR Radio’s musical instrument drive in March to benefit the city’s public school children, a staff member took a microphone to the drop-off site at Lincoln Center to interview donors.

One of them, Joseph Feingold, 91, had taken a bus from his senior residence to donate his violin.

“He seemed eager to tell his story — and it was some story,” said Graham Parker, WQXR’s general manager.

As Feingold tells it, he bought the violin on the black market in 1946 while he, his younger brother Alexander — an Auschwitz survivor — and other Holocausts survivors were living in a displaced persons camp in Germany.

“Germany in 1946 was in turmoil and the market was in disarray,” Feingold, a retired architect, who was 23 at the time, told The Jewish Week. “You could buy anything, no questions asked. I saw a violin in an old-fashion violin case. It looked in perfect condition and I paid maybe a carton of American cigarettes for it. At that time, American cigarettes were a very expensive, sought-after item.”

Feingold had been born in Poland and was living in the western part of the country when World War II broke out with the Nazi invasion of Poland on Sept. 1, 1939.

“We ran east and … I managed to get smuggled into western Ukraine, where I lived for almost a year,” he said, adding that he was then arrested by the Russians and sent to Siberia.

After the war, in 1946, he was allowed to return to his former town in Poland and was seriously injured in a pogrom there before joining his brother. The two came to the United States in 1948.

Feingold said he had taken lessons on the violin as a child and played the violin “on and off” since the war.

“When I got married, the first gift I got from my wife was a music stand,” he recalled. “One of my grandchildren, Arthur, played the violin in school, and I have a picture of the two of us fiddling together on a roof.”

“Recently I decided I couldn’t produce a pleasing sound anymore because my fingers don’t work as they should,” he said. “When I heard of the instrument drive, I thought it was a good idea.”

Parker said WQXR had been hoping to receive about 1,000 instruments in the drive, and instead received more than three times that number from primarily New York area listeners.

“There have been other instrument drives by orchestras and classical radio stations but never on this scale before,” he said. “We pulled partners together and highlighted the critical need of providing instruments for New York City students.”

Parker said the instruments have been checked and where necessary refurbished by Sam Ash Music, one of the station’s partners in the drive.

“At the beginning of the year I spoke with Paul Ash, a founder of the privately owned music store chain, and he agreed to give us discounts on the repairs,” Parker said, noting that Paul Ash died just a few weeks later at the age of 84.

In addition to instruments, the drive raised about $400,000 from listeners and foundations, most of which was used to refurbish the instruments.

The Department of Education has told the station that the instruments will be sent to the 1,100 public schools in the city and that several students would be sharing some instruments. (The decision about which schools will get the instruments is imminent.)

“The instruments will belong to the schools, mostly middle and high schools, and we are close to matching the instruments to the needs of each school,” Parker said.

He added that Feingold’s violin needed some new strings and polish and was now as good as new.

“A good violin can go on almost indefinitely if it is well maintained,” he observed.