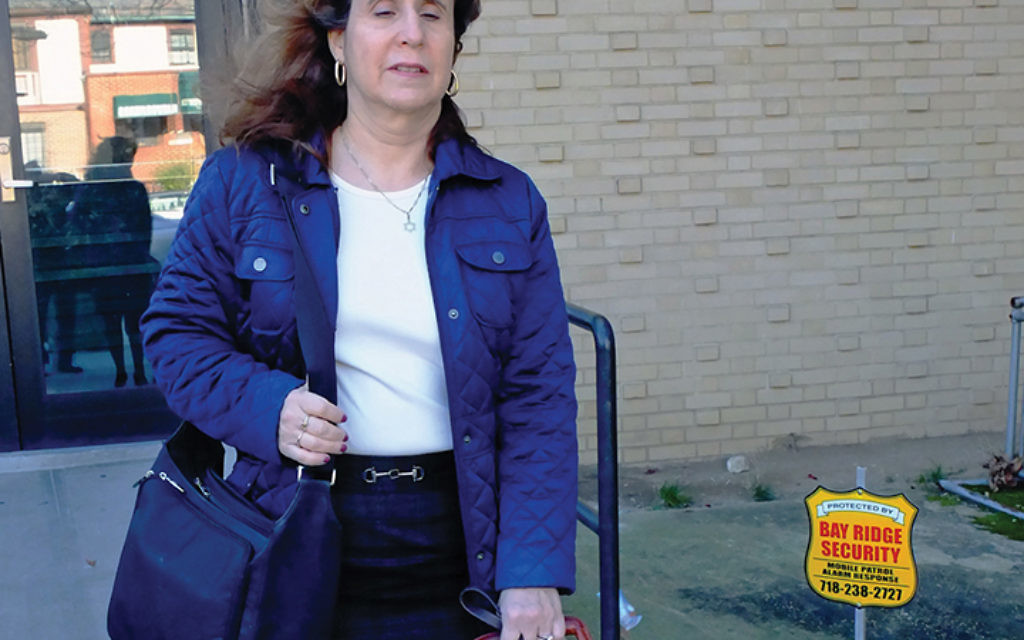 The synagogue president will not read from notes or from the weekly bulletin.

Janet Hammelbacher is blind. She memorizes the announcements.

Last spring, Hammelbacher, 58, became president of the 400-family, egalitarian Conservative congregation. She is, she says one recent afternoon, the only blind shul president she’s ever heard of.

Which probably does not make her worthy of a profile in a newspaper, she says during an interview in her home a few blocks away from her shul, her black Labrador retriever guide dog Jack sitting quietly at her feet. “If I were not blind, you wouldn’t be here.”

She’s probably right. There are hundreds of synagogue presidents in the Greater New York area, and nothing Hammelbacher does as her congregation’s lay leader is out of the ordinary. Like approving budgets. Signing checks. Solving a synagogue’s inevitable problems. Greeting members in shul. Or going, when she earlier was vice president, on a synagogue trip to Israel.

She does all those, respectively, with a computer that reads out text, with the edge of a credit card that guides her signature, with good listening and administrative skills, with a memory of members’ voices, and with the accompaniment of Jack.

She’s like any other synagogue president, Hammelbacher insists. Being blind, “that’s just part of me.”

An accomplished touch typist, she is at ease sending emails. Her computer reads the replies aloud. No big deal, she says.

No concessions asked, none given. Hammelbacher, a skier and scuba diver, is confident, but not arrogantly so. When she needs help — advice, or a helping hand in an unfamiliar setting — she is not afraid to ask, she says.

Smartphones and apps and talking computers are a big help, Hammelbacher says. A wide variety of Jewish books, including her siddur, are available in Braille. “It’s a very good time to be blind,” she says.

“I’m not aware of her having any handicap,” says Richard Meyer, a former Hillcrest Jewish Center president and current board member. “She does every function that every president in the past has done,” including his wife, Cheryl.

When she first took office, some members of the shul wondered how a blind synagogue president could do her job, the Meyers say; they don’t hear those questions anymore.

Because she doesn’t want the distraction of listening to the text of budgets or other documents through an earplug from a computer that reads the documents aloud, Hammelbacher usually goes over to the shul and memorizes relevant texts beforehand. “Every piece of paper,” Richard Meyer says, adding that she is often better prepared “than most of us.”

“She’s a consensus builder,” says Rabbi Manes Kogan, who has served as the congregation’s spiritual leader for a decade. “She’s a builder of community. Everyone receives inspiration from her.”

Hammelbacher is the only blind president of a synagogue in the Conservative movement, said Rabbi Steven Wernick, CEO of the United Synagogue of Conservative Judaism.

“Often, those with differing abilities bring unique insights and talents that enrich our communities. Janet Ingber [her maiden name, by which many people know her] exemplifies that value and ideal,” Rabbi Wernick said. “USCJ is engaged in a four-year partnership with the Ruderman Foundation to help member kehillot become more inclusive for people with disabilities. USCJ also offers consultation to any member kehilla, and is working to make a variety of resources available online such as information about successful models that now exist in our kehillot, and guidance on changing the culture of a kehilla to foster inclusion.”

Attracted to the synagogue when her daughter Jill — now studying at George Washington University — was a religious school student, Hammelbacher “little by little” became active in the shul. “I worked my way up the ladder,” she said, at each rung showing that her sight limitation did not limit her competence.

Her inspiration, she says, was her late mother, Leah Ingber, who was active in local politics and set a precedent for community involvement.

In addition to attending Shabbat services every week, Hammelbacher, a lifelong native of Flushing, Queens, tries to attend the synagogue’s weeknight minyanim a few times a week. It’s a five-minute walk away. She goes with Jack. “Let’s go,” she will say at the front door of her house. Then she points in the direction she wants. “Left.” “Right.” At shul, she knows where the three entrances are located. Inside the building, she’s memorized all the turns and stairs.

Hammelbacher says she chose a guide dog over a cane because of a living creature’s sentient skills — a dog can sense oncoming traffic, can see a hole in the road or other hazards, can steer her around danger. “It’s a big safety factor,” she says.

Jack leads Hammelbacher to the synagogue, then rests at floor level in the sanctuary during services while his owner, sometimes taking the arm of a friendly congregant, makes her way up the eight stairs to the president’s chair.

“The dog is just part of the scenery of the shul,” Rabbi Kogan says.

Hammelbacher’s Braille prayer book presents a uniBorn with a genetic mutation that limited her sight all her life, she lost “what little I had” about 20 years ago. So she taught herself Braille.

“I have a really good memory, which is a big help,” Hammelbacher says of how she performs all the duties of a synagogue president — including giving announcements, making speeches and chairing board meetings — and works as a music therapist and writes books and frequent freelance magazine articles.

If people meeting her for the first time had not known earlier that Hammelbacher is blind, they might not suspect it. Her eyes are focused, her head does not sway from side to side as sometimes happens with blind people, her life seems so — a word she uses — normal.

Her home has few apparent adaptations for a blind person. Her husband, Frank, a dealer in old stocks and bonds, of course keeps the floors clear of things she could trip over, and has attached small plastic stickers to oven knobs to make it easier for his wife’s cooking and baking.

The Hammelbachers occasionally play games like Scrabble; the tiles feature Braille letters. The couple made transparent Braille stickers to put on the pages of children’s books, for reading to Jill when she was young.

Lighting Shabbat candles is no problem, Hammelbacher says. She can feel the wicks and the matches. To make sure that the candle is lit, she holds a hand over the flame to feel the heat.

Over the years, the Hillcrest Jewish Center has been the spiritual home to members from a wide variety of racial and ethnic backgrounds, with a wide variety of physical challenges. “We are welcoming,” Cheryl Meyer says.

Next Passover the congregation will host a seder for people with disabilities, inviting residents of local group homes and day programs. As president of the shul, Hammelbacher will attend the seder. She’ll say a few words of introduction, then participate like any member of the congregation.