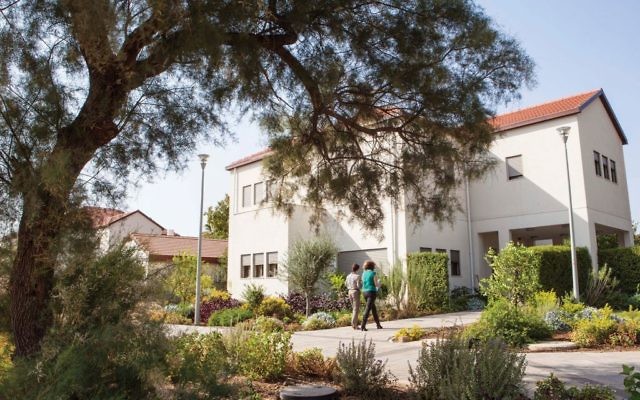 Some of the residential houses in one of the two Beit Ruth villages in Israel. The girls, from across the Israeli spectrum, live three to a room. Photos courtesy of Beit Ruth

Zohar, born under African skies, is a daughter of Beta Israel, Ethiopian Jews descended from the Tribe of Dan, once one of the Ten Lost Tribes. Moving with her family to Israel when she was five, by 13 she was lean and athletic, a highly ranked long-distance runner, racing through Israel’s streets, parks and fields, until raped by a stranger in the Ramat Gan soil.

“My mother was kind of supportive,” says Zohar, “but my father took it very hard; he never stopped blaming me for what happened. I didn’t go back home at night and didn’t go to school in the mornings. I found myself in situations that I never thought I’d find myself: living on the streets, drinking, smoking, drugs, like falling downhill.”

Homeless, helpless, on the edge of the law, she found herself ordered into a municipal lock-down facility for girls, designed to protect the girls from whomever was threatening them. (Lock-down meant no casual exit or entry, with guards, mounted cameras and security restrictions.) “It was like jail, very hard,” says Zohar. “My family rarely came to visit me, sometimes my mother, never my father.”

After four months in lock-down, Zohar says her social worker “told me about Beit Ruth,” an institution for abused or at-risk girls that opened in 2006 with room for only 15 girls. Expanding its capacity to 45 girls in 2013, Beit Ruth opened a second house in Afula, a northern town in the Emek Yizrael valley. Zohar’s social worker was quick to get Zohar a place.

Iris Twerski, who manages Beit Ruth’s activities in Israel, told us that Zohar’s father “wanted her to stay in lock-down place. When he heard she was going to Beit Ruth, an open place, he wasn’t happy, but the lock-down place could only be temporary.”

Zohar recalls visiting Beit Ruth “with my mother and my social worker. It was new and beautiful. I fell in love with it immediately. They told me to think about it. I told them I could say ‘yes’ immediately.” She was only 14 when she first unpacked.

Beit Ruth Educational & Therapeutic Village was established as a residence for girls 13-18 who have been removed from their families by court order as a result of neglect or various levels of abuse. The girls, from across the Israeli spectrum, live three to a room, in a home-like environment, where they are given communal housekeeping chores, individualized education and therapy. Zohar says that there was an extra bed in each room to host a guest, perhaps a sister.

Founded by Susan and Michael Ashner, American philanthropists, with help and support from the Jaffa Institute and WIZO, the project aimed to help Israel’s most vulnerable, self-destructive or at-risk girls, estimated to be as many as 33,000 by Beit Ruth. Without assistance, reports Beit Ruth, “these girls often descend into a life of addiction, prostitution, violent relationships, poverty, attempted suicide and the perpetuation of the cycle of abuse.”

With an all-female staff of 40 caring for 45 girls, everything is arranged, from new clothes to healthcare, from private and group therapy to individualized education and programs in art, dance, drama and music. The girls also are taken on educational field trips throughout Israel to deepen their connection to their Jewish identity and culture.

“At the beginning it was hard,” says Zohar. Aside from the regularly scheduled therapy sessions, Zohar’s social worker would take her out for coffee or ice cream. “Sometimes when we would go out informally I found it easier to talk,” recalls Zohar.

The girls were not allowed to keep their phones with them, said Twerski, “to protect them from the outside,” though the phones were returned to the girls for one-hour of phone time each evening, or they were allowed to use a communal phone.

Zohar, now 20, “graduated” and lives independently in Tel Aviv. Her alarm clock rings at 5 a.m. so she can get to her 6 a.m. job as a hostess in a Tel Aviv hotel.

Zohar, recently in New York with Twerski to meet financial supporters of Beit Ruth, laughs about how she once didn’t have the wherewithal to get out of bed in the morning, and now she’s up at 5. At first, “some of the girls,” Twerski explains, “don’t have the strength or energy to wake up in the morning, but not because Zohar was lazy; she didn’t yet have the energy. The source of life was taken from her. It’s our job to make these girls believe again in the world. The saddest thing is we just have room for 45 girls.”

Sometimes, Zohar wonders “about what happened in the past,” the times she tried to kill herself. “Why was my life like that? Why was I living, at all?” Without Beit Ruth, “to have money for drugs and alcohol, I would have worked as a prostitute. I would have no life, if I didn’t live on the streets. That, or suicide. Without Beit Ruth, that’s where I would have ended up. But that was then.”

After Beit Ruth, Zohar found work in an Ethiopian restaurant. One day a young man from the Tribe of Dan came in, looking for a meal but leaving in love. He courted Zohar, shared her love for Amharic music and helped her find that hostess job in the Tel Aviv hotel, where he works in maintenance.

Zohar brought him to Beit Ruth to “meet the family. I have a few Beit Ruth mothers so, of course, I came to get approval for my boyfriend.”

And there was evening, and there was morning, a revival: She had a job, she was in love, life was good, riding a bus to her tomorrows in the Tel Aviv dawn.