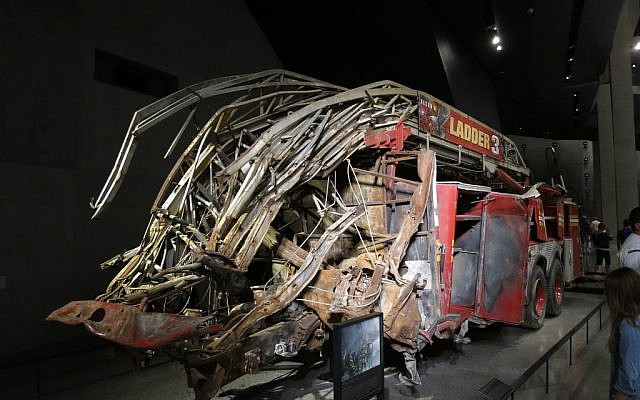 As I went into spring break this year, the concept of ‘othering’ was on my mind due to the recent massacre in New Zealand. After I found out about attack, I had a conversation with one of my teachers about why this tragedy occurred. His answer was that any group that is a minority is often ‘othered,’ something that white nationalists have taken to a violent level. A big part of this concept of ‘othering’ stems from 9/11. However, I did not fully understand this because I never truly learned about 9/11. Perhaps it was because I was too young. Or maybe America simply wants to forget what happened. Regardless, I decided to visit the 9/11 museum in New York City during my spring break. While there, I found many similarities between things I had experienced as a young Jew living in Pittsburgh and the 9/11 attacks.

I thought back to October 2018, when the children of 9/11 victims wrote to my family after the tragedy in my synagogue in Pittsburgh. What I found most interesting about their letters was how they talked about September 11th as a day publicized by all. Everyone experienced the event thanks to the media attention, but the people whose loved ones died wanted to mourn privately. This experience of private mourning in a public situation was strikingly familiar to my own experiences. I felt the pain of those who had to cope with PTSD and those whose daily lives were changed forever. My community’s grief, like that of families of 9/11 victims, was broadcasted and shown at public vigils.

Although I was not alive to experience 9/11, encountering a similar traumatic attack allowed me to empathize with the event. I, too, received many phone calls from family and friends to check to see if I was okay; I, too, thought that all hope in humanity would be lost forever; and I, too, had to face the tragedy every day in the community. The reason for the 9/11 attack was extremists who were anti-American, while the attack on my synagogue was an American who was Anti-Semitic. Despite the fact that my experience was 17 years later, the same type of sorrowful aftermath occurred in both situations.

After 9/11, American’s fears turned into extreme fears. White people started singling out immigrants, specifically Muslims. The trend of Muslim-blaming worsened, peaking when President Trump was elected two years ago. The attacks on 9/11 set the stage for this American concept of ‘othering,’ which has slowly evolved into white nationalism—the idea that only white people should live in America.

While leaving the 9/11 museum, I heard a familiar song playing on the escalator going back up to street level. The song was called “Give Us Hope” and it was a song I had sang in glee club. I did not realize that the song was written for 9/11 but I felt comforted hearing a familiar tune. “Give us hope, my voice is calling. Can you see…” I started singing along as I went up to street level. I sang, carrying a new understanding for my America.

Ada Perlman is a rising sophomore at The Ellis School in Pittsburgh.