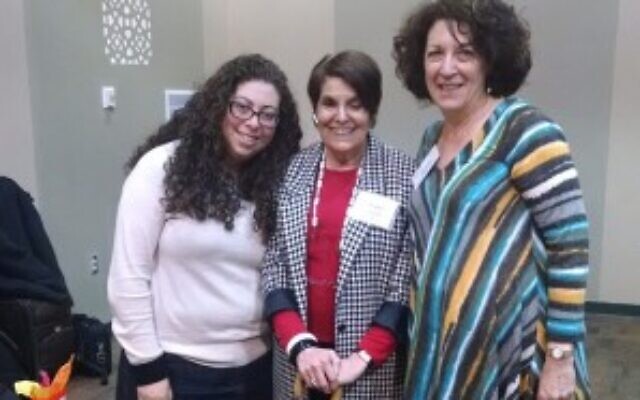 Rabbi Lynne Landsberg, z'l, is in the middle with the author on the right. Courtesy of Shelly Christensen

Editor’s Note: On February 26th, 2019, the 9th annual Jewish Disability Advocacy Day (JDAD) took place. JDAD is a one-day event where Jews with disabilities and their allies from organizations and communities across the nation convene on Capitol Hill to learn about relevant disability policy, raise awareness on disability inclusion, and advocate on current legislative priorities. Shelly Christensen shared this powerful talk during the day to remember her friend and inclusion advocate Rabbi Lynne Landsberg,

When you met Rabbi Lynne Landsberg, you were drawn into her light. I was one of those people, like many of you here today. For those who had never met Lynne, today is a glimpse into that light. Today is a celebration of Lynne, and how she was THE champion for the rights of people with disabilities and those who love them.

It is fitting that today we celebrate and honor Rabbi Lynne Landsberg. Lynne co-created Jewish Disability Advocacy Day (JDAD) as the Senior Advisor of Disability Policy at the Religious Action Center of Reform Judaism, with RAC colleagues Rabbis David Saperstein and Jonah Pesner, and David Feinman and William Daroff of Jewish Federations of North America.

Their vision, to bring Jews from across the U.S. to Capitol Hill to advocate on disability policy with Congress, brings us here today.

Lynne died on February 26, 2018. That we are gathered here together doing the work that Lynne loved, the work she taught us to do, and expected us to do, is no coincidence. As I look around, I see Lynne’s zeal and passion reflected in your eyes.

I met Rabbi Landsberg on September 22, 2005. We were invited to speak at the Alliance for Full Participation Conference in Washington DC about inclusion of people with disabilities in Jewish communal life. I was a 4-year veteran in the new field of Jewish disability inclusion, as the program manager of the Minneapolis Jewish Community Inclusion Program for People with Disabilities and the mom of a child on the autism spectrum. Lynne was at the RAC. And she lived with a traumatic brain injury.

I know that our meeting was not a coincidence.

Audience members were mesmerized as Lynne shared her story. I felt that I was in the presence of a great woman who had accomplished so much–both before and after the accident that changed her life forever.

“One morning in January 1999, I was driving my 8 year old son, Jesse, to Sunday school when my Jeep skidded on a patch of black ice and wrapped around a tree. Thank God, Jesse emerged without serious physical injury.

For me, it was an altogether different story. That tree came through my window and left me with a traumatic brain injury.”

Lynne spoke about the accident and the impact in her life. She said, “I’ve been told that in my former life, I was an effortless multi-tasker, a fast-talker and a quick thinker. I had speaking engagements across the country and composed my most powerful speeches in airplanes and taxis. In my former life, I was Rabbi Lynne Landsberg. And although I am still Rabbi Lynne Landsberg, the rest has changed.

After six weeks in a coma and four months in the hospital, I embarked on a life of intensive rehabilitation. I had to re-learn how to walk, talk, read, and perform regular daily activities. I continue to cope with memory loss.

When I re-entered the world I was shocked at what I learned. Before my injury, I belonged to one minority that was cohesive, strong, articulate and definitely heard – the American Jewish community. What I learned after my injury was that I became a member of a second minority that is daily the victim of discrimination. Ten times larger than the American Jewish community, this minority remains almost invisible and barely heard: Americans with Disabilities. Discrimination permeates every aspect of life for this minority.”

After our panel ended, Lynne and I began chatting. She asked me where I was off to next. I told her that I was off to speak to a group of synagogue lay leaders in Rockville.

Without missing a beat, she said, “I have to go with you! We’ll take a cab—I’ll pay for it.” I thought it was pretty cool that she wanted to go with me to the meeting. And then she said the words which cemented our friendship. “Rockville has THE BEST GOODWILL in the DC area. Let’s go there first!”

Lynne and I worked together on numerous disability issues. We knew that every step, no matter how big or how small, would matter to someone who just wanted what everyone else wants—to know they belong to a supportive Jewish community that encouraged, accommodated, and valued them.

Lynne called me excitedly after one of the first JDADs. She said, “I met someone from Yachad! We think it would be GREAT if we could get all the movements together to work on inclusion. We could call it HINEINU.” Knowing Lynne, Hineinu would soon come into existence. Lynne was so proud of Hinenu which brought The OU, United Synagogue of Conservative Judaism, Reconstructing Judaism, Chabad, the URJ, JFNA and the RAC together. Through Hineinu, we learned what others in the Jewish community were doing and wrote a guidebook on synagogue inclusion that each organization could adapt.

Lynne and I co-authored a chapter in the book, Judaism and Health. In our chapter, Judaism and Disability, Lynne wrote:

“The Talmud [Berachot 34b] teaches that a synagogue should be built with windows in the sanctuary.   This is so we can see who is outside and unable to join us. Please, ask yourself and every Jewish institution that you belong to or support in any way if we are doing all that we can to ensure access in all aspects of Jewish community life.

If we want to make changes in this country in order to allow people with disabilities the rights they are due, we must begin by opening the eyes of Americans and helping them understand that they have to change their attitudes. Where better to start than at home?”

The last time Lynne and I spoke was on Shabbat 2 weeks before she died. I didn’t think she was well enough to talk, so I texted her a Good Shabbos. She texted back, “CALL ME!”

Lynne asked about my Mom, who was very sick, and sadly, died on February 25 2018, the day before Lynne died. I told Lynne that we were expecting twin granddaughters in the summer, and she asked me to text their ultrasound pictures. We talked about The Voice and Law and Order SVU. These were the other things that made us friends, the things that went beyond our passion for justice, our love of Judaism, and the value of love for humankind. It was a breathtaking call—I knew it would be our last. The sadness I felt, knowing that this rock in my life was dying, was lifted. In it’s place I discovered blessing, grace and gratitude, for my friend whose presence in my life was beyond measure.

Our calls customarily ended with us saying, “I love you.” This call was ordinary in that way. And it was also extraordinary for the gift of one more chat.

Everything Lynne believed and stood for, is set before us now.

Lynne said, “Judaism is faith-oriented, but it’s much more community-oriented and people-oriented. That’s what I focus on – people.”

Today let us capture the spirit and the passion, knowing that what we do today will impact the lives of so many people who want what others want—To belong, to contribute, to be a presence in whatever ways they choose—in this life, in this country, in our communities back home, and, in the true spirit of Lynne Landsberg, in the Jewish world.

As Lynne said at the end of every sermon and every speech she gave: