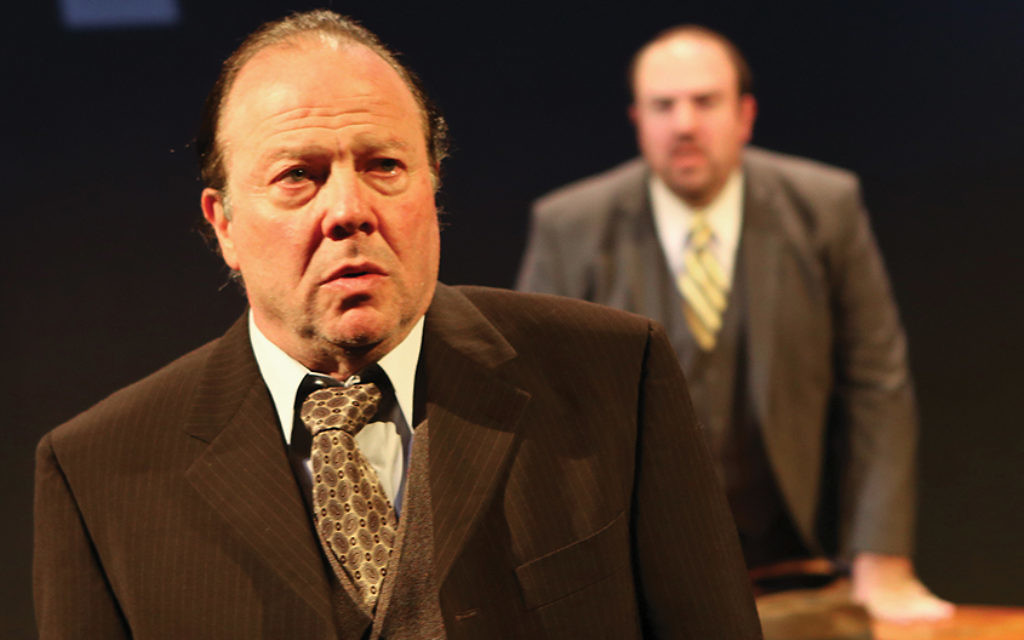 When Arthur Miller’s “Death of a Salesman” debuted on Broadway in 1949, the idea that a common person could be the subject of tragedy was revolutionary. Willy Loman was about as humble a hero as one could imagine, a man whose whole life was a failure and a disappointment. That he could be Jewish, like his creator, occurred to few; this was a period, after all, in which American Jews were assiduously trying to shed most of the vestiges of their tradition, and to merge as fully as possible into the life of their adopted country.

Few that is, except for Joseph Buloff, the prominent Yiddish actor who translated the play into Yiddish and performed it, first in Buenos Aires and later in Brooklyn. His translation is the basis of the thought-provoking New Yiddish Rep production of “Salesman” that opened Off-Broadway last week, which claims to return the play to its “original” language and ethos. Starring the Yiddish entertainer Avi Hoffman as a memorable Willy, the production, directed by Moshe Yassur, inevitably, and quite ironically, ends up emphasizing the play’s universality rather than reclaiming its ethnic specificity.

Hoffman (the third actor with that surname to be cast as Willy in a major revival of the play, following Dustin Hoffman and the late Philip Seymour Hoffman) is well known, especially to a Jewish audience, through his 1990s PBS television revue, “Too Jewish?” and its sequel, “Too Jewish Too!”; both are filmed versions of his stage act, in which he performs Borscht Belt songs and comedy routines. He makes an enormously appealing Willy, one who uses his rubbery face (which looks not a little like Bert Lahr’s) to advantage. His penchant for rolling syllables around in his mouth makes it seem as if he is always just about to break into song.

Indeed, watching the short, balding, paunchy Willy with his tie askew and his too-tight suit being crushed by a world that has no use for him, and in which he is fundamentally out of place, is as moving and terrifying as one could wish. The casting of Hoffman in the role reminded me a little of seeing the comedic actor Nathan Lane triumphantly playing Theodore “Hickey” Hickman in “The Iceman Cometh” last year at BAM.

Would that the rest of the cast were up to Hoffman’s standard. As Linda (Willy’s wife), the veteran performer Suzanne Toren wears a look of unvarying concern, coldness and suspicion on her face, with glitter in her eyes; she seems more calculating than heartbroken. Daniel Kahn, as Biff (Willy’s eldest son) and Lev Herskovitz, as Happy (Willy’s younger son) rush through their lines, as if they will be more convincing in Yiddish by speaking the language as quickly as possible. Matching Hoffman’s fluency in the language are the Yiddish vaudeville performer Shane Baker as Charley (Willy’s neighbor), the up-and-coming actor Ben Rosenblatt as Bernard (Charley’s son), and the Folksbiene veteran Itzy Firestone as Ben (Willy’s deceased older brother). In addition, Adam Shapiro is particularly convincing as Howard (Willy’s cold-hearted boss) and Ilan Kwittken is wonderful as Stanley (the long-suffering waiter).

But, given the fact that the play takes place largely in Willy’s increasingly unhinged mind (Miller’s original title was “The Inside of His Head”), it might have been better to stage it as a one-man play, with Hoffman playing all the parts, like Alan Cumming’s 2013 one-man version of “Macbeth.”

It might also give the production more coherence than it currently possesses. Unlike Buloff, Yassur has the characters switch to English in romantic scenes with strangers, such as Willy’s affair with an unnamed woman (Amy Coleman) and his sons’ flirtations with the two women whom they meet in the restaurant, Miss Forsythe (Shayna Schmidt) and Letta (Arielle Beth). This makes some sense, as these female characters would naturally be English rather than Yiddish speakers, but Willy’s American-born sons, who would also almost certainly speak English with each other, mostly speak Yiddish throughout the play (except when uttering English expressions like “son of a bitch” and “scum of the earth.”)

Willy’s need to be noticed is especially poignant in Yiddish. As he shouts to Howard when the boss is trying to usher him out of the office, “Menschen kenen varten!” (People can wait) — he insists on being heard, and on his agenda being more important than anyone else’s. Willy gets enraged when people are not listening to him; this makes his wife’s line, “Gib achtung” (Attention must be paid) so essential. His being an immigrant makes his feelings of being a nobody particularly painful and disorienting; he constantly mops his brow and puts his hand to his throat as if suffocating.

But in the end, as Willy puts it, “a gesheft iz a gesheft” — business is business — and all that matters is whether or not one succeeds financially. The Yiddish language adds color and flavor to lines that are more prosaic in English; I especially liked Ben’s line that the jungle (“der vildernisht”) is “ongeshtupped mit diamantn” (overstuffed with diamonds) — the same adjective colloquially used, in New York, for a sandwich overflowing with pastrami.

Yassur’s “Salesman” is a follow-up to his acclaimed Yiddish production of Samuel Beckett’s “Waiting for Godot,” which ran both in New York and in Northern Ireland, and which argued that Vladimir and Estragon are Jewish survivors of the Holocaust. But I’m not sure that translating classic plays into Yiddish (“Salesman,” of course, has been translated into more than two dozen languages) is any more revelatory than translating them into any other language. Indeed, Miller famously directed “Salesman” in Beijing in 1983, in a landmark production that helped to open China to Western influence in the years following the Cultural Revolution.

As an elderly Asian woman who was sitting behind me remarked to her companions after the lights came up, “It’s a play that works in any language.” Translating it into Yiddish, a language that the playwright never spoke, does not make it any more authentic than it, so deeply and indelibly, already is.