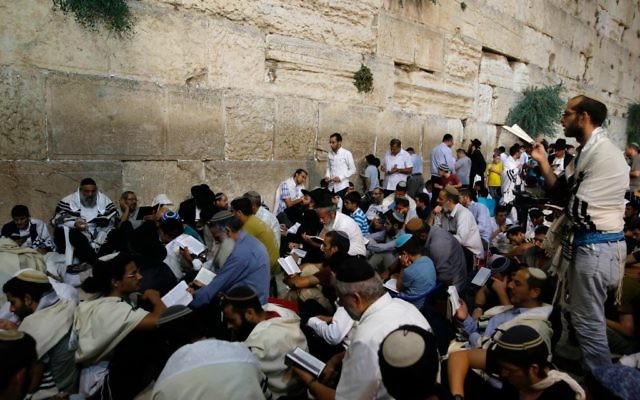 The Jewish calendar, reflecting the rhythms of our lives, flows between periods of sadness and joy, often seeming to mirror the moods of our people. On Tuesday, we observed Tisha b’Av, the Fast of the 9th of Av, marking the destruction of the First Temple in 586 B.C.E. and the Second Temple in 70 C.E. It was the culmination of a three week-period of semi-mourning leading up to the saddest day of the Jewish year.

Those three weeks were marked by several deadly terror attacks in Israel and rioting at the Temple Mount in Jerusalem sparked by false rumors that the government seeks to limit Muslim prayer at the holy site. Reading from the Book of Lamentations on Tisha b’Av, with its vivid description of death and despair at the Temple’s destruction, we were reminded, yet again, of our people’s suffering and victimhood during much of our history.

But even Lamentations ends on a note of hope, looking to a future when the Lord will “take us back” and “renew our days as of old.”

This weekend we observe Shabbat Nachamu, the annual Sabbath of Comfort, so named because we read the Haftorah from the Book of Isaiah (Ch. 40: 1-26), with the prophet offering consolation to the Jewish people after so much suffering. Nachamu is the first of seven Sabbaths during which we read Haftorahs of consolation, leading up to Rosh HaShanah. Much of that comfort comes from recognizing that Jerusalem, the city described by the prophets as decimated and desolate, is now the vital, pulsing center of a reborn Jewish state — a precious gift for us to cherish and sustain.