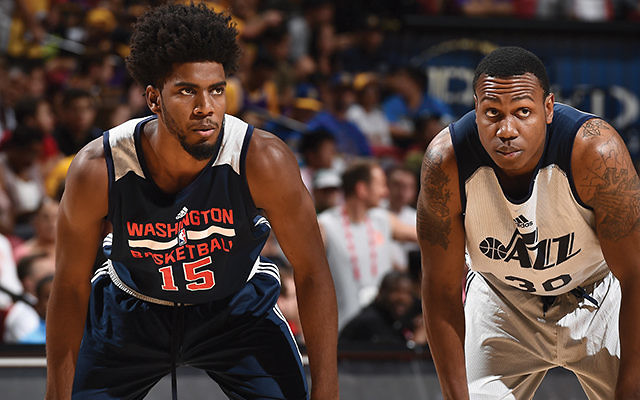 Omri Casspi, a 6-foot-9 forward from Holon, broke the mold in 2009 when he became the first Israeli ever to play in the NBA; he was picked in the first round of the draft by the Sacramento Kings. Four years later, point guard Gal Mekel from Ramat HaSharon became the second after signing with the Dallas Mavericks. And as the NBA becomes increasingly international — with star players from Latvia to Sudan to New Zealand — will Shawn Dawson be No. 3?

A month after he led Maccabi Rishon Letzion to an improbable championship in the Israel professional basketball league, Dawson, a 6-foot-6 athletic wing player considered one of the country’s best players, is in Las Vegas, not to celebrate his team’s victory, but to fulfill his dream of playing in the NBA.

“Down the road I hope to be a starter on an NBA team,” Dawson told The Jewish Week by phone after one of his recent games in Vegas. For now though, Dawson, who was born in Eilat and has lived in Israel all his life, is just trying to make an NBA roster while playing for the Washington Wizards’ summer league team.

“I am aggressive and bring passion and energy to every game that I play,” Dawson said.

Although he is only 22, Dawson is in his fifth year playing pro basketball, and he’s hoping his experience helps gives him an edge over his American peers coming out of college.

Dawson has a basketball pedigree that goes back much further than his five years as a pro. His father, Joe Dawson, was born in Alabama, and after playing college ball for the University of Southern Mississippi, moved to Israel and played 20 years in the pro league there, even winning an MVP award. While in Israel, Joe met an Israeli woman, got married (later divorced) and had two kids, the elder of whom is Shawn.

“[My dad] has been my biggest teacher my whole life. He plays a big, big part in building my confidence up,” and that, Dawson said, “might be even more important than teaching me skills.”

Dawson, like Casspi, who recently posted a photo on Facebook wearing tefillin, takes his Judaism seriously, according to his agent, Daniel Hazan. “Judaism is very close to his heart,” Hazan, founder of Hazan Sports Management, told The Jewish Week. “He says Hamotzi at Shabbat, answers prayers after I say them and had a bar mitzvah,” said Hazan, a Yeshiva University graduate.

About his shot at the NBA, Dawson said, “I want to get where they got,” referring to Casspi and Mekel. If he is serious about being NBA Sabra No. 3, improving his three-point shooting may be the key. “Honestly, he shoots the three mediocre, but if he is able to improve on that,” Hazan said, “he has a chance to become something really special.”

Dawson has impressed in summer league play so far, hitting a sharp-shooting 80 percent of his shots in his most recent game. According to a report by CSNmidatlantic, the Wizards invited Dawson to training camp. But international basketball reporter David Pick told The Jewish Week that it is unlikely Dawson would accept that invite.

“The Wizards seem like a long shot,” Pick said. “They have 12 guaranteed spots filled already, and Dawson’s contract with [Maccabbi] Rishon means that he can’t go the NBA Development League.”

For now, Dawson’s hopes lie with another NBA team recognizing what Pick calls “tremendous talent” and “tons of upside,” and signing him to a contract. If Dawson decides to play one more year in Israel and then try the NBA again next year, one thing is for sure, according to Pick. Israeli basketball juggernauts Maccabi Tel Aviv and Hapoel Jerusalem will not be able to lure him away from Rishon Lezion.