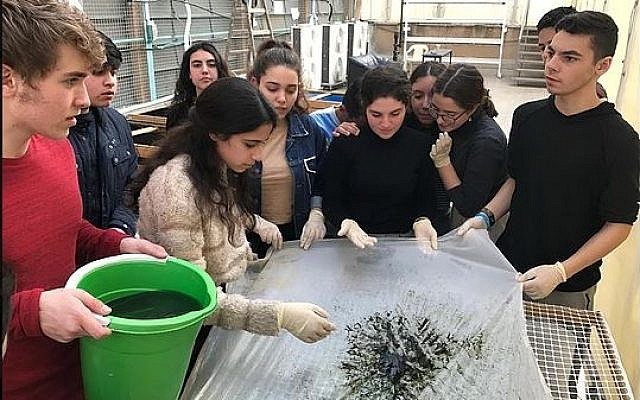 A Tel Aviv high school project to produce an edible algae food supplement to fight malnutrition has been so successful that African countries are now reportedly coming to Israel to learn about the technology.

Representatives from the Democratic Republic of the Congo recently visited the Herzliya Hebrew Gymnasium school, Channel 13 reported, where six years ago students took up the challenge to develop a low cost method to produce spirulina, an edible algae that is rich in vitamins and nutrients, but is high priced when sold as a supplement in health food stores.

“It is an accessible food supplement available only to the most privileged,” a school video noted. A month’s supply in a health food store in Israel costs about about 150 NIS ($42).

School principal Dr. Zeev Degani told Channel 13 that during a 2013 class discussion on philosophy one student lamented that despite so much food in the world, millions were suffering from and dying of malnutrition. 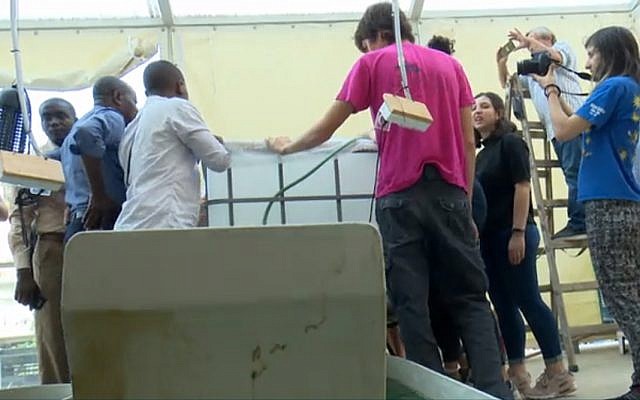 High school students at Tel Aviv’s Herzliya Hebrew Gymnasium show representatives from the Democratic Republic of the Congo how they produce the spirulina algae food supplement. (screenshot Channel 13/via Times of Israel)

That discussion led the students to research the subject and discover that spirulina could be a solution. Used by the ancient Atzecs in South America, spirulina was rediscovered as a food supplement in the 1970s.

The school ordered some spirulina from abroad and developed methods until they had a system whereby the algae can be cheaply and easily grown in quantity. They then started working with schools in South Africa and Rwanda.

Now in its sixth year, students and staff from the high school have helped set up local spirulina production in South Africa, Rwanda, Ethiopia, Kenya and the Democratic Republic of Congo, where up to 1.5 million children suffer from malnutrition.

“Five grams of dehydrated spirulina powder a day for a month can really take a child from a state of terrible malnutrition and return them to health,” student Miki Sabir-Kadmon said.

Over the years older students passed their knowledge on to younger students, and the budding activists have testified at the Knesset, met President Reuven Rivlin to enlist his endorsement and gone on field trips to Africa.

“Most aid programs give us aid for a limited time, so the (spirulina program) really helps,” said Rodrique Chirivgola who heads the nutrition department at the Lwiro Research Center of Natural Sciences. “In my opinion our new approach with Israel is better. Instead of giving me a fish, teach me how to fish.”