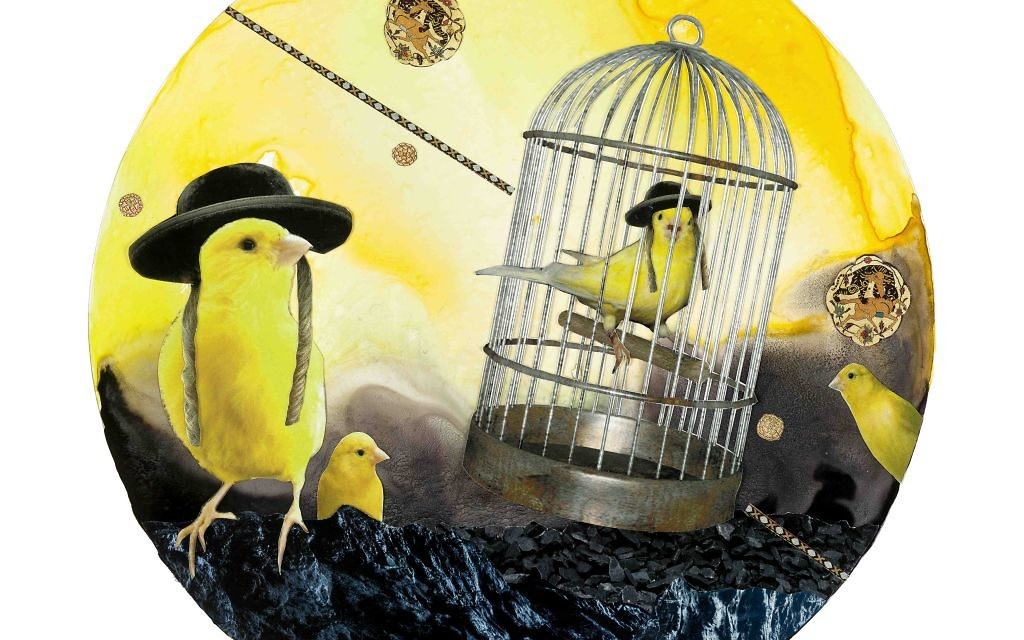 There is a sense that our current cultural climate does not lend itself to nuance. Reflecting this, the Israeli-American artist Andi Arnovitz’s new exhibit of original work at the Yeshiva University Museum, titled “Threatened Beauty,” is straightforward, though no less thought-provoking for its directness.

The collection is comprised primarily of an engaging mix of collage and watercolor, and explicitly intends to convey the artist's sense of anger, despair and existential anxiety; the exhibition press release explains that Arnovitz (and the museum as well) feels the work is especially relevant as the debate over the so-called “Iran deal” continues. She is quoted directly as expressing her desire that President Obama “look at this [collection] every night before he goes to bed.” And while this explicit agenda of persuasion might at first feel manipulative, Arnovitz’s anger is communicated articulately by her work as deeply sincere and driven by compassion.

Politics aside, there is no denying the artist’s fecund imagination and instinct for dramatic juxtapositions. Arnovitz uses a diverse array of material for her collages, including excerpts from Milan Kundera’s existential novel “The Unbearable Lightness of Being,” which contrast starkly with her watercolors, with their flowing, diaphanous quality.

But the material most pointedly and prominently used are strips and swatches taken from Persian carpets. These are used to represent everything from houses to missiles, including the Twin Towers and Iranian nuclear facilities (out of which bloom toxic watercolor drifts and emissions). The carpet remnants add a sense of continuity to the pieces that comprise the exhibit, as well as forcing the viewer to consider the role of time and the production of art in the evaluation of a culture.

This is not to say the work is without humor. Arnovitz displays a sly, dark wit, as with a piece called “Canaries” that has the titular birds, one of which is caged, decked out in a streimels and peyes. The message of a work such as this may at first appear simplistic, but as with much of the exhibition, it benefits from revisiting. On the whole, Arnovitz succeeds in communicating a righteous anger, on behalf of groups as varied as Iranian children to the refuges now scattered across Europe. It is a sensibility that is nonetheless laced throughout with playfulness, and partly by making use of an unexpected medium, itself elevated from the mundane everyday of paste and clippings, Arnovitz demonstrates an impressive ability to communicate a complex, humane sympathy for the disenfranchised and neglected.

“Threatened Beauty” is on view at Yeshiva University Museum at the Center for Jewish History, 15 West 16th Street, Manhattan, through January 10, 2016.

David Hammerschlag is a New York-area writer, editor and cultural omnivore, and a recent graduate of Sarah Lawrence College.