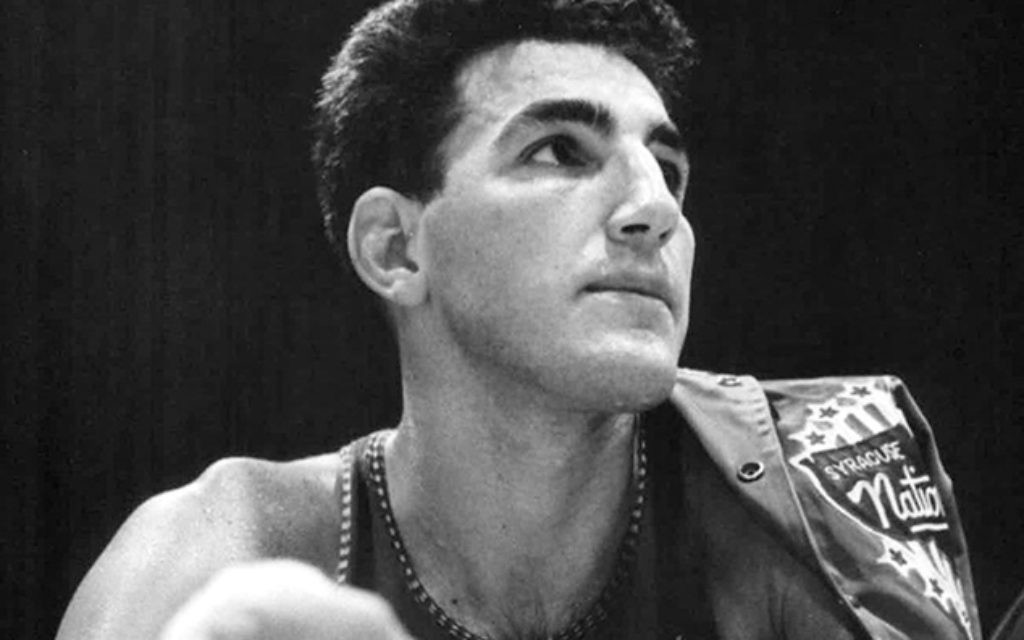 When basketball, the iconic “city game,” was still a very Jewish sport for several early decades in the last century, Adolph “Dolph” Schayes was arguably our team’s greatest player. He was the best of many talented Jewish players who helped establish the National Basketball Association, a 8-foot-inch NBA Hall-of-Fame forward, a member of most lists of the league’s 50 best-ever athletes.

A native of the Bronx, born to immigrants from Romania, he was a symbol of a generation, that made its success in this country with a combination of brain and brawn.

And he was representative of generational change, one of the last of the large number of prominent Jews who excelled in professional sports. In recent years, NBA rosters have included only a few Jewish players, most notably Israel-born Omri Casspi of the Sacramento Kings; today, only a handful of Jews play in the NFL, NHL and Major League Baseball.

Mr. Schayes’ son Danny (at 6-11, he towered over his father) played in a less-Jewish NBA from 1981 to 1999, a good but not great player; his nephew Todd, a basketball coach in Denver who never reached the NBA, coached in the 2001 Maccabiah Games in Israel, leading his two U.S. teams to a silver and bronze medal.

Mr. Schayes, who died last week at 87, became a sort of hero of mine when as a boy I accompanied my father and my brother to the 69th Regiment Armory in Manhattan to see this great Jewish star’s Syracuse Nationals go up against the New York Knicks. Back then, pro basketball was so low-key that tickets cost between $1 and $3 dollars and the Ringling Brothers Circus annually bumped NBA games out of Madison Square Garden.

For me, the highlight of the game was Mr. Schayes getting into a fight with New York star Richie Guerin. The conflagration was not Jewish vs. Catholic fisticuffs, just two strong competitors battling it out. But I remember leaving the arena thinking that Dolph was one tough Jew.

Much later in my life, I became an acquaintance of Mr. Schayes when I spoke about my book on Judaism and sports at a Conservative synagogue in Syracuse, where he and his wife Naomi lived most of their adult lives. I was pleased that he did not take offense to my indicating publicly – somewhat tongue in cheek – that he had come to be remembered primarily as “Dan Schayes’ Dad.”

He took the humor with grace.

Soon thereafter, I turned to Mr. Schayes as a source for a book on New York Jews. Typical of his generation, he asserted that his Jewishness was not at all rooted in synagogue life — he readily admitted that he never was bar mitzvahed. Rather, his sense of belonging to the Jewish people grew out of his daily encounters with other Jews on the streets of his neighborhood. His connectedness was so strong that he came to believe that “everyone was Jewish.”

The giant of a man first sharpened his shooting skills and elbows when he led the Trylons, an all-Jewish club that played spirited games against other ethnic groups on the asphalt playgrounds and band-box gyms that in the early 1940s were part of the street sports culture of Davidson Avenue, just a few blocks west of the Bronx’s Grand Concourse. Mr. Schayes would once recount that the most challenging matches pitted them against Catholic clubs at the St. Francis Xavier tournament. There he and his teammates, just adolescents at the time, “suffered slings and arrows and things thrown at them from a hostile crowd.” But he also remembered matter-of-factly that due to his deadly set shot, “the Jews always won.”

As a high schooler, Dolph went on to sports-powerful De Witt Clinton High School, and from there it was a short bus ride to New York University’s uptown campus, where he starred from 1944-48. When Schayes arrived on campus, the school was beginning to move away from the discriminatory “personal and psychological” tests that weeded out many Jews from that bucolic preserve on University Heights. During this era, NYU downtown readily admitted Jews; the uptown campus wanted to train a WASP elite.

Mr. Schayes put the lie to the belief that Jews did not possess the old collegiate spirit because they were not “varsity men.” Earning All-American honors (and good grades to boot) he majored in aeronautical engineering; one year he was honored as the Violets’ ideal alumnus.

During his distinguished 16-year career with the Nationals, as the consummate power forward — before that term came into vogue — Mr. Schayes was a frequent all-star. At the time of his retirement, after the 1963-64 season, he was the league’s all-time leading scorer, his records eventually eclipsed by a rather larger fellow named Wilt Chamberlain.

Later in life, living in a very different type of Jewish world, his allegiance to his people became more formalized — within as always, his venue of sports — when he coached the U.S. basketball team in the 1977 Maccabiah Games; Danny Schayes was his star player.

I remember how I felt when I picked up the phone one day and heard his voice saying: “Professor Gurock, this is Dolph Schayes.” The little boy in me was so excited to speak to a childhood hero.

As we spoke, what came across was his modesty, humor, self-effacement and above all, intelligence that included borrowing a line from Shakespeare (Hamlet’s “slings and arrows”) to describe how he was received at a Bronx tournament so many decades earlier. I remember Dolph Schayes as a great ballplayer, a proud Jew, and above all a soft-spoken, humble individual notwithstanding all of the accolades that he most certainly earned.