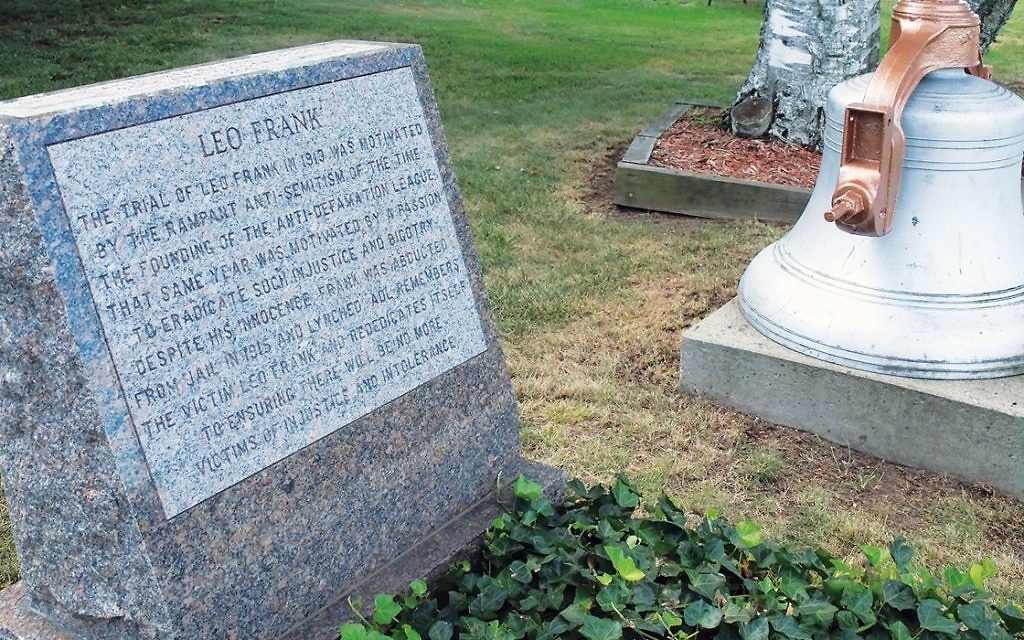 On the sweltering Georgia night of Aug. 16, nearly a dozen of Marietta’s finest citizens — a former governor, a judge, lawyers, teachers, two former mayors — got into their Model T autos, driving for hours, more than 100 miles over unpaved back roads to the prison farm in Millidgeville, to hang “the Jew,” Leo Frank, convicted of murdering the beautiful 13-year-old Mary Phagan, a Christian “flower” of Southern maidenhood. During the trial, a mob shouted to the jury, “Hang the Jew or we’ll hang you!” Sentenced to death, the governor commuted Frank’s fate to life imprisonment, but if Frank could appeal so could the mob, and “Judge Lynch,” as they called their lesser instincts, insisted Frank must hang for Phagan’s death on April 26, 1913.

That 1913 day was overcast but a holiday, and Frank, 31, began that Shabbos of Pesach wishing his wife Lucille “Good Yundef” Passover greetings, and mailing his uncle and “dear tanta” (Yiddish for aunt) greetings, as well. They owned the National Pencil Company in Atlanta but lived in New York, leaving their nephew managing the factory. Frank wrote to them about the local opera and added, “Today was Yundef here,” but he was joking, referring not to Passover but Confederate Memorial Day — not a good day to be a New York Jewish Ivy League industrialist Yankee in Atlanta. There was a Confederate parade, he wrote, “and the thin, grey line of veterans, smaller each year, braved the rather chilly weather to do honor to their fallen heroes.” He wanted to watch holiday baseball, the Atlanta Crackers hosting the Birmingham Barons.

He didn’t bother to tell his uncle and tanta that he stopped by the office to pay his workers, including Mary Phagan, whose job it was to affix erasers onto the pencils. Her friend, Georgie Epps, was supposed to meet her at the parade. She never showed. He later told police, Mary was “afraid of advances” that Frank had made. “Frank Tried To Flirt With Murdered Girl,” headlined the Atlanta Constitution. A few days later, the headlines announced that “Mrs. Mima Famby,” proprietor of a rooming house, swore to police that Frank “wanted a room for himself and a girl on the murder night.”

Two years later, in the middle of the night, the heat rising to the 90s, the lynch mob, with guns and handcuffs, arrived at the prison farm. The prison guards, without resisting, turned the key to Frank’s cell and gave Frank, Convict 965, to the hangmen. Frank was hated inside the prison, too. A few days prior, an inmate slashed Frank’s jugular vein, and Frank, expecting to die from his wounds, didn’t even want his assailant punished. Enough already, “I’m at peace with God,” he wrote, “ready to die.”

In the darkness after midnight, Frank was pushed into one of the Model T’s. Knowing his fate, he asked if one of his soon-to-be killers could please take his wedding ring off his bound hands and give the ring to Lucille, his wife of five years (three with him in jail). The ring was taken.

At dawn, back in Marietta, the blindfolded Frank, with a noose around his neck, was hoisted onto a table. The hangmen kicked the table and Frank’s slender body, all 5-feet-8 of him, gently swayed from an oak tree, his neck broken. Cut down, men stomped on his face. Killers posed for photographs with the body, the photos sold as postcards. His wedding ring, in an envelope, was thrown at Lucille’s door.

Leo’s body was sent by train to New York, to Mount Carmel Cemetery in Queens. One hundred years later, he has visitors, as can be seen from the pebbles on his gravestone: “Leo Frank / Beloved Husband / April 17 1884 / August 17 1915 / “Semper Idem” (Always the Same).

In the same cemetery, across a field of stones, there are pebbles on the grave of Mendel Beilis, another Jewish factory supervisor like Frank, who in 1913, the year of Mary Phagan’s murder, was accused around Passover of murdering a young boy in Kiev, his blood needed for matzoh, accusers said. Semper Idem.

In Frank’s final moments of life, in the cool of morning, he must have wondered, how does a man of dignity and intellect, a lover of opera, a graduate of Cornell, a “macher” in the Jewish community — president of the Atlanta B’nai B’rith; member of The Temple, Atlanta’s most elite Reform synagogue; a man who married into one of Atlanta’s most prominent Jewish families — how does it happen that he should be standing on a table under an oak tree, blindfolded, in a noose? His Cornell yearbook noted, “Leo Max Frank hails from sleepy Brooklyn, famed for graveyards, breweries and baby carriages.” An engineering student, “His genius found expression in three-phased generators and foundry work. … His services as a debating coach [have] made him a fame hard to equal.”

Later that autumn, after the lynching, Frank’s B’nai B’rith created the Anti-Defamation League, even as the Knights of Mary Phagan, as some of the lynchers dubbed themselves, created the modern Ku Klux Klan, dormant since the 1870s. In the night, one could see flaming crosses on nearby Stone Mountain.

At the time of Frank’s hanging, there were no Jews in Marietta. A century later, there is a Chabad, and Conservative, and Reform synagogues. Living down the block from the lynching site, Rabbi Steven Lebow, 60, of Reform’s Temple Kol Emeth, says, “I feel I became Leo Frank’s rabbi.” He had a historical sign placed near the oak tree, and says Kaddish at the site on Frank’s yahrzeit (Elul 7).

Rabbi Lebow tells us over the phone that he officiated at a memorial for Frank last week, where they also said a prayer for Mary Phagan. In the room were Jews from all the Marietta shuls, and even some grandchildren of the hangmen.

“The grandchildren and great-grandchildren of some of the lynchers are friends of mine,” says the rabbi. “I socialize with them. I see them all the time. They are the nicest, kindest people. They are horrified by what happened here 100 years ago.”

On March 4, 1982, The Nashville Tennessean headlined, “An Innocent Man Was Lynched.” Alonzo Mann, 84, the last person alive who testified at the Frank trial, wanted to tell the truth that he didn’t tell at the trial, “Then I can die in peace,” said Mann. The old man, 14 in 1913 when he worked for Frank, told the Tennessean (and two lie detector tests), “I have something heavy on my heart. I was in the factory that day. I saw Jim Conley [carrying] the body of the girl, and Leo Frank was nowhere to be seen.” Mann said Conley, an African-American janitor at the factory, intimidated Alonzo into keeping quiet about what he saw. The boy ran home to his parents who advised Alonzo to indeed keep quiet.

Shortly after the trial, said Rabbi Lebow, Conley’s own lawyer, William Smith, sent word to the governor, “‘You’ve got the wrong guy. It was my guy (Conley) who did it.’”

It was rare, to say the least, that a Southern court would accept the testimony of a black man to convict a white man, but the court believed Conley’s accusation of Frank. Conley and the prosecution depicted Frank as a sexual monster, with a parade of underage factory girls testifying that Frank didn’t just look at them, he leered, he ogled. In Conley’s testimony, says Rabbi Lebow, “he wove in these lurid sexual details.” Even in those far more demure times, Conley testified, says Rabbi Lebow, “how Frank would regularly meet prostitutes in his office, performing oral sex on them,” and yet “it was also said that Frank was homosexual,” and that his circumcision accounted for his deviance. All this, despite Frank being charged with murder, not any sexual crime.

After Mann’s revised testimony, a Georgia parole board ruled in 1983 and again in 1986 — with the Phagan family insisting (as they insist to this day) on Frank’s guilt — that “in an effort to heal old wounds,” the parole board would pardon Frank for being lynched, but not for murdering the girl. Pardoned, because the State of Georgia failed to protect him from the lynching, precluding future legal appeals, but pardoned “without attempting to address the question of guilt or innocence” in the Phagan case. He remains guilty in the eyes of the law.

The month of Elul, prelude to Rosh HaShanah, is the season to visit cemeteries, mystics teaching that the souls of our loved ones are able to advocate and intercede for us in these Days of Judgment. Who better than Leo Frank to advocate for his people, the lonely, the unfairly accused? In his time, said classmates, he was quite the debater.