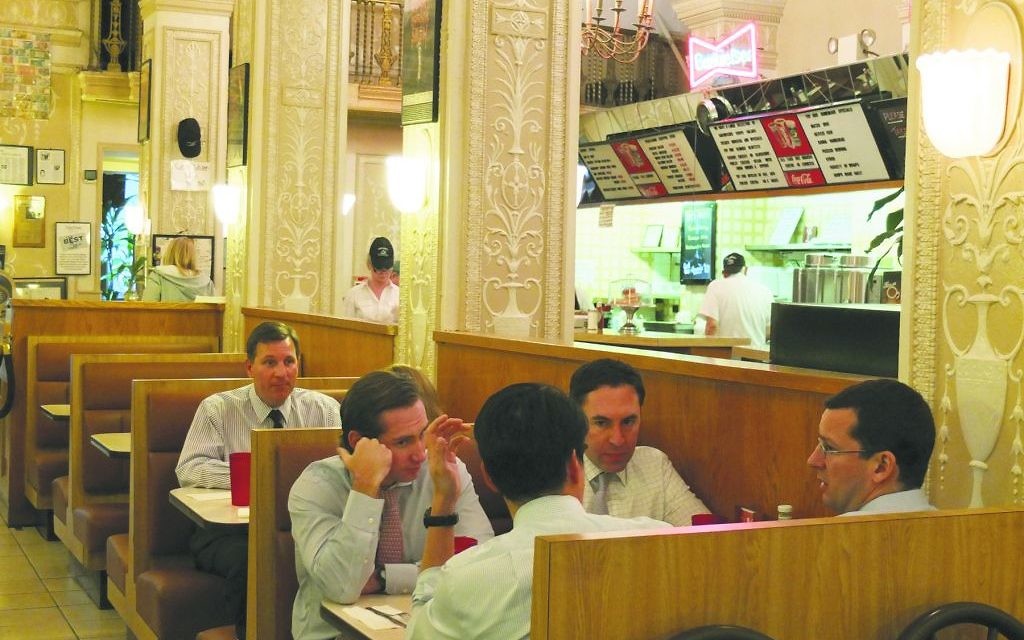 The Edison Café is a theater district institution and, for its matzah ball soup and latkes, a landmark of Jewish New York. Yet I never knew it was there. Born in the D.C. area, I pride myself on being a Jewish New Yorker By Choice who possesses all the knowledge and zeal of a convert. Or at least, I thought I did.

Oddly, a banker introduced me to the café a few years ago. I was working for Reuters as a business journalist back then. My job was to ingratiate myself with financiers in the hope that they would feed me a few morsels of market-moving information.

With this banker, the job was a pleasure. He was a suburban Jewish dad of three: handsome, scary smart and too confident to soften his New York edge or accent. When I said something was “shvach” (Yiddish for weak), he got my reference. And he was the one who suggested we meet for breakfast at the Edison Café.

When I first walked into the place, which adjoins and takes its name from the Edison Hotel at 228 W. 47th St., I was surprised, then delighted, it was so totally unlike the slick restaurants I tended to suggest as professional meeting spots. What a life! A bona fide banker source, with blintzes.

The Edison Café is a luncheonette with tearoom touches. It still boasts the airy, vaulted ceilings of the ballroom it used to be. Copious amounts of decorative molding cover the walls with the forms of urns, vines and graceful ladies.

Yet the lighting is dim; the banquets’ wood veneer and handwritten signs supplement the menu board. Theater posters vie for notice with a pastiche of family photos and restaurant reviews.

As I got to know the place, both with and without the banker, I learned that the Edison Café has history where other restaurants have pretensions. Thirty-three years old in October, it’s been both a home away from home for theater people, and a source of success and happiness for its owners, who survived the Holocaust, said Conrad Strohl, their son-in-law, and the restaurant’s manager.

“They were in hiding the entire war,” said Stroll, 66. “They got married after. Their story is the real story.”

But the restaurant most famously made its reputation as a Broadway hangout. It’s where you’ll find haimish hometown boys made good like actor Henry Winkler and Emanuel Azenberg, producer of such hits as “The Sunshine Boys,” “Sunday in the Park with George” and “Rent.” Jackie Mason, too, who was raised on the Lower East Side but was born in Wisconsin.

“The first thing that drew me [to the café] was the tradition,” said the Fonz in a voice-mail message. “Actors past and present, actors who are working and not working, all talk about the Edison Café. Second, the borscht. The cold borscht with cream. Wow. The third, the incredible affection and connection that the owner had for Holocaust survivors. Very touching … And that is why I’m going to be back now when I do ‘The Performers.’ To get my borscht.”

“The Performers” opened Nov. 14 at the Longacre Theatre. That means the “Yentas,” as Strohl calls them, and other regulars who crowd the café pre-show for the $12.45 matinee special of soup, sandwich, fries and beverage, might get to meet the Fonz. Winkler likes to chat with Edison patrons, Strohl said.

The café also inspired playwright Neil Simon to write a 2001 show, “45 Seconds from Broadway,” set in an Edisonesque restaurant presided over by two characters based on Strohl’s in-laws, Harry and Francis Edelstein.

When Harry died in 2009 at 91, Broadway dimmed its marquees in a tribute normally reserved for actors and producers.

The Edelsteins’ lives were the stuff of drama. Before the war, they knew each other in the Polish village of Komorow, near Lublin, and their families went into hiding together. The people they were paying gave them up to the Nazis, who found and shot all of them while Harry, Francis and two of their siblings happened to be out scouting for food, Strohl said. Henry and Francis went back into hiding and immigrated to the United States after the war.

They got into the restaurant business and took over the café at the invitation of the Edison Hotel’s owners, who were from the Edelsteins’ patch of Poland and who give them a break on the rent, Strohl said. Immediately prior, it had been a Beefsteak Charlie’s, with black walls.

“Basically, the story is, [Francis] is a very, very, very good cook,” said Strohl. “She makes up recipes out of her head; nothing is written down.”

These days, Francis doesn’t make it to the restaurant often, as it’s difficult for her to walk. She lives in Riverdale with a round-the-clock Polish aide.

But the menu of short-order standards like burgers and the borscht and other ethnic specialties has never changed. The café has never sought kosher certification. It did receive an “A” from the city in its most recent inspection by the Department of Health.

A few online reviews say that the Edison Café is “nothing special,” “mediocre” or that the fries are greasy (um, isn’t that the point?). But most reviews, even up to the more recent ones posted at Yelp.com, rave about the service, the food and the prices.

For my money, it’s about atmosphere. And having access to that atmosphere is at least as necessary to regular folks as it is to theater people. Fantasy is their stock-in-trade, but the café’s combination of the quotidian and the sublime allows people like my banker and me to take a brief step out of the everyday.

Marvin Davis, too, an Upper West Sider who runs a real estate business near the café. He’s wanted to check it out for 20 years, he said, but never found the time. Then all of a sudden on a sunny autumn Thursday, he did, breaking for a long lunch, a cup of tea and some people watching.

“I’m just sitting here, looking at these women over there,” Davis said, lowering his voice. He tilted his head toward a couple of ladies, lunching. They were very ordinary-looking, but the Edison cast a kind of aura of possibility around them. “Look at them, they must be showgirls or something.” ◆