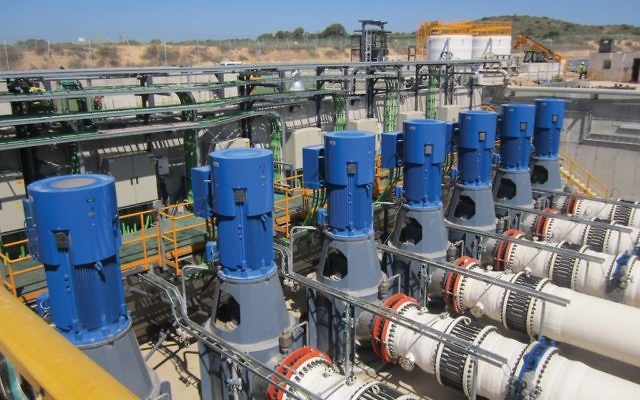 Summertime in Israel has changed forever. The weather is as hot as always, but the age-old fear of the country drying out as the sun beats down has vanished, and the nervous wait for the winter rain is a thing of the past.

Surprisingly, Israel today has a water surplus. In just over a decade, Israel has opened five major desalination plants that produce a total of approximately 600 million cubic meters a year, with more than half of the water for domestic use. The newest, Sorek, is the world’s largest seawater desalination plant. Around 70 percent of homes get at least some of their water from desalination.

If you drive down Highway 4, which runs along the Mediterranean coast, you can see work crews laying huge pipes — the water equivalent of new high-speed internet cabling — to accommodate the unprecedented flow of desalinated water to different parts of the country.

So, the nation that once watched the water level of the Sea of Galilee as football fans watch the scoreboard, has quelled its fears — with its own technology. Homegrown innovation has been key in drastically reducing energy needs for desalination, and thereby making it viable for large-scale use.

Jack Gilron, the head of the desalination department at Ben-Gurion University’s Zuckerberg Institute of Water Research, tells me that the energy needed to produce a cubic meter of desalinated water has been reduced to less than 60 percent of its former level in the last 15 years. “When they were able to reduce the energy, water became more affordable and it opened the door to large-scale desalination.”

One of the most stunning innovations that has cut down energy needs, Gilron said, is a way of “recovering” enormous amounts of mechanical energy from water that is returned to the sea — energy that could previously not be harnessed.

And here is one of the great surprises in the story of Israel. Almost unimaginable a few decades ago, Israel is effectively finding a solution to the scarcity of water.

By contrast, the situation with the Palestinians is bleaker than many would have liked to anticipate. But can Israel’s water surplus help to break the deadlock?

Israeli and Palestinian negotiating teams have, of course, focused heavily in the past over what water allocation each received under a peace agreement. And while nobody can clone Jerusalem or Hebron so as to alleviate the dispute over these holy places, water has suddenly stopped being a finite resource.

And Egypt, in particular, can find the geopolitical opportunity in desalination because desalination doesn’t exactly “solve” the water issue — it shifts it. The water is available by treating sea water, but doing so still requires vast amounts of energy, so the new question is how to source the necessary energy to keep growing populations hydrated without massively increasing carbon footprints.

Egypt isn’t looking for a bilateral peace process just between Israel and the Palestinians, but wants a regional conversation, and this is where the water issue gets interesting.

And so, the Israelis, Palestinians and Jordanians that comprise EcoPeace Middle East have suggested that the parties play to their strengths, and Jordan becomes the region’s renewable powerhouse as the Israelis and Palestinians use the power to desalinate enough water for all three nations.

This is not utopian, but rather very pragmatic.

By making the Palestinians a recipient of Jordanian power and supplier of its water, it would reduce the Palestinian reliance on Israel for water — a relationship that is a headache for both sides and a source of now-necessary friction. By doing the same for Israel and Jordan, it would solidify their relationship.

This kind of creative thinking to overcome not only the Middle East’s water issues but also the challenge of powering these plants without generating huge carbon emissions is smart, and potentially very good for stability in the region.

A plan that has Israelis and Palestinians desalinating water from the same sea and the Jordanians generating the power through renewable means would have the three parties working together to a constructive end, but without the current dynamic of Israel being viewed as the controller of Palestinian water. It can reposition water from being one of the obstacles standing in the way of peace in the region, and shift it to become an area for constructive collaboration.

This may sound like fine detail at a time when no serious peace process is underway, but it’s not every day that a long-standing obstacle to peace is transformed into an opportunity.