In India it’s just called “tea” and served in thimble-sized cups, but everywhere I went people seemed to be offering me steaming cups of chai, their national beverage. It started on the plane ride from Tel Aviv to Mumbai when my Indian seatmate repeatedly brought me back cups of milky coffee from the kitchen at the back of the plane (along with a fistful of sugar and cream sachets), the closest thing to chai on an El Al flight.

Later, huddled under tarps in the street-side markets waiting out a monsoon rain, shopkeepers handed us fresh cups moments after haggling with us over the price of their wares. I soon came to realize this was quintessential Indian hospitality at play, a gesture that repeated throughout my six-week visit.

I was there on a volunteering trip teaching extracurricular classes to underprivileged children in a Mumbai slum and a farming village a few hours outside of the city. The group was organized by the Entwine arm of the New York-based Joint Distribution Committee (JDC), which partnered with the Gabriel Project Mumbai (GPM), a local NGO founded by an Australian-Israeli. 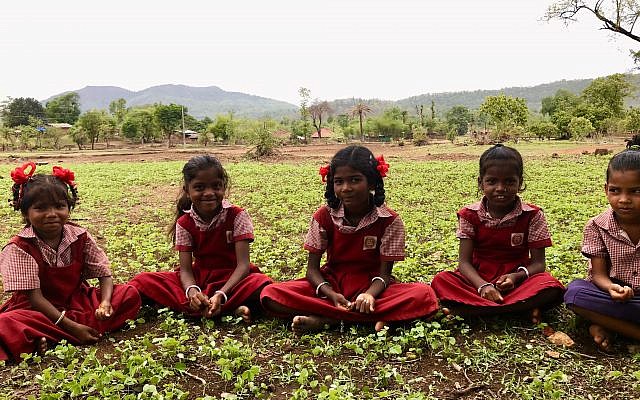 Students at GPM’s classes in Ashte, a farming village north of Mumbai. GPM was founded by an Australian-Israeli after a visit to India inspired him to make a career change from the tech industry to international development. Miriam Groner/JW

Students who attend the classes receive a free lunch cooked by the women’s empowerment arm of the NGO; food security is not a given in India and the meal is a strong incentive to attend the classes. GPM has also set up sanitation programs and a water filtration system in the Kalwa slum, which is home to an estimated 200,000 people and has no plumbing, or sewerage system and limited clean drinking water. They continue to expand their initiatives as the need arises. When they found out a child hadn’t shown up to class because he had died due to a preventable illness, they set up the Shravan Health Clinic. Named in the child’s memory, the clinic now serves around 1000 patients a month. 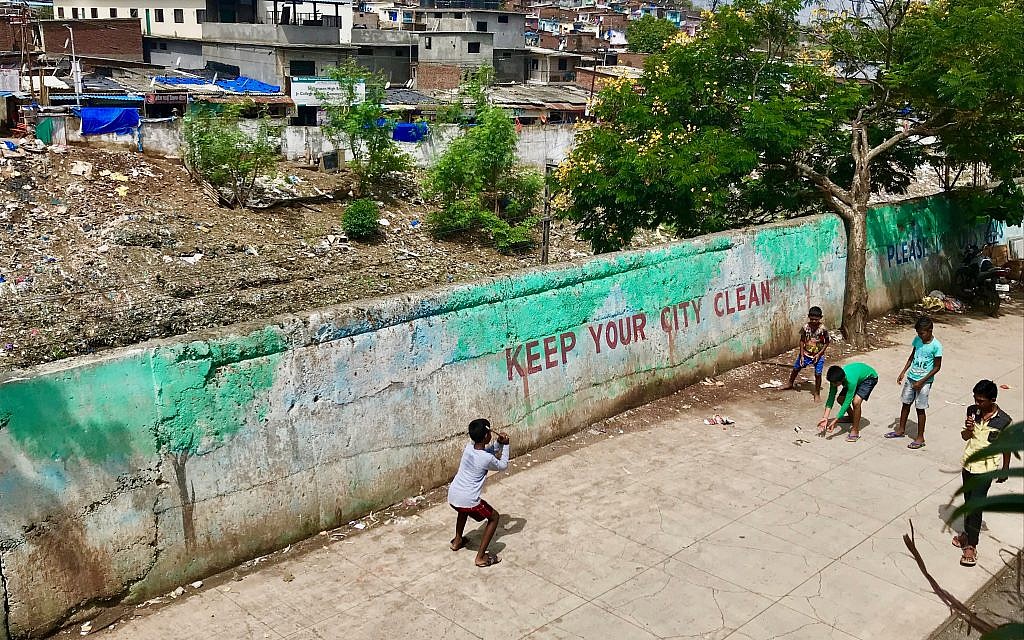 When we weren’t teaching, we explored Mumbai’s Jewish community, which despite being overshadowed by the multitude of other religions in India, has a long and storied history. That story stretches back some 2000 years when, historians speculate, Jewish traders traveling from Judea came to India along the trade route and settled in Kochin. More came around 70CE when Jews were exiled from Israel following the destruction of the Second Temple.

Legend has it that these Jews, who came to be known as the Benei Israelis, were shipwrecked off the Konkan Coast (about 30 miles south of Mumbai) and lived isolated from other communities for hundreds of years until a Jew from Kochin came across them and recognized some of their customs. We visited a Jewish cemetery there, murmuring kaddish among gravestones hundreds of years old. A beautiful synagogue, with a colorful interior in true Indian style, still services the handful of Jews that live in the area. 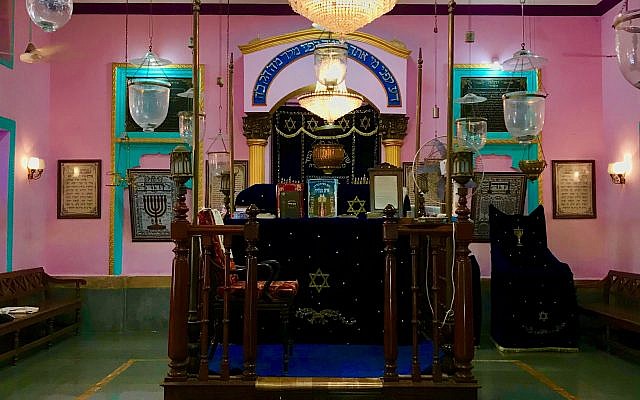 A Benei Israeli shul in the Konkan Coast, just south of Mumbai. Its believed Jews first settled here following the Roman invasion of Israel around 70CE. A boat en route to Kerala was shipwrecked and some of the survivors stayed here, isolated from other Jewish communities until around the 1500s when a Jew from Kochin discovered their community. This Bene Israeli shul is still used occasionally by the handful of Jews that still reside in the area. Miriam Groner/JW

Benei Israeli Jews, who have their own unique customs like the malida ceremony, were for a long time the majority of Jews in the country and were joined later by Baghdadi Jews fleeing persecution in the Middle East in the 18th and 19th centuries.

Though the communities lived isolated from each other they enjoyed relative peace and success in India, with little anti-Semitism. A Baghdadi Jew named David Sassoon, who settled in Mumbai in the 1800s and acted as the Jewish community leader for a time, is perhaps one of the country’s most famous Jews; his philanthropy is still evident today in the architectural masterpieces that dot the city and bear his name.

The community was estimated to be at its peak in the 1940s when there were 30,000 to 40,000 Jews, but it shrunk significantly due to mass emigrations after Partition in 1947; many Indian Jews made aliyah following Israel’s creation in 1948.

Now there are only about 5,000 Jews in all of India, the majority of whom live in Mumbai where there are about 10 synagogues, many of which are beautifully historic and architectural landmarks. 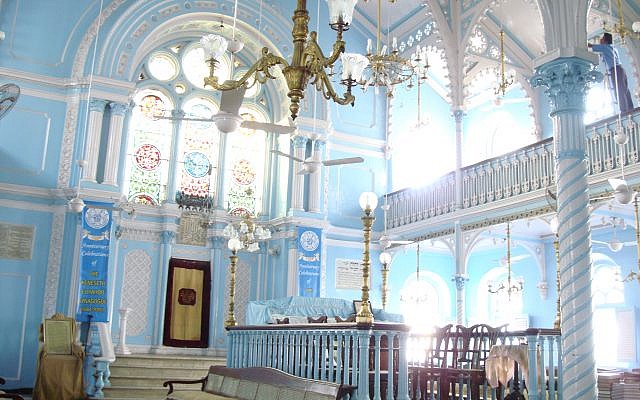 Built in the Classical Revival style, the Knesset Eliyahoo synagogue hosted a beautiful Sephardi prayer service on Shabbat. Though most of the pews were empty but for a minyan and a handful of tourists, the community members welcomed us graciously, plying us with fresh chai — yes, again — and insisting we stay for the kiddush.

It was a surreal experience to spend Shabbat at Chabad 11 years after the terrorist attacks there killed six people, including its directors Rabbi Gabi and Rivkie Holtzberg. A modern building has replaced the old Nariman House, but a wall in the sanctuary has been left untouched, pockmarked with bullet holes — a chilling contrast to the lively prayers happening steps away. Having attended the Holtzbergs’ funeral in Israel in 2008, it felt comforting, almost like coming full circle, to see the activity in the building. A museum is being built on the top floors to celebrate universal faith, and a memorial on the roof contains the names of all 164 victims of the attacks; the only such memorial in the city to do so. 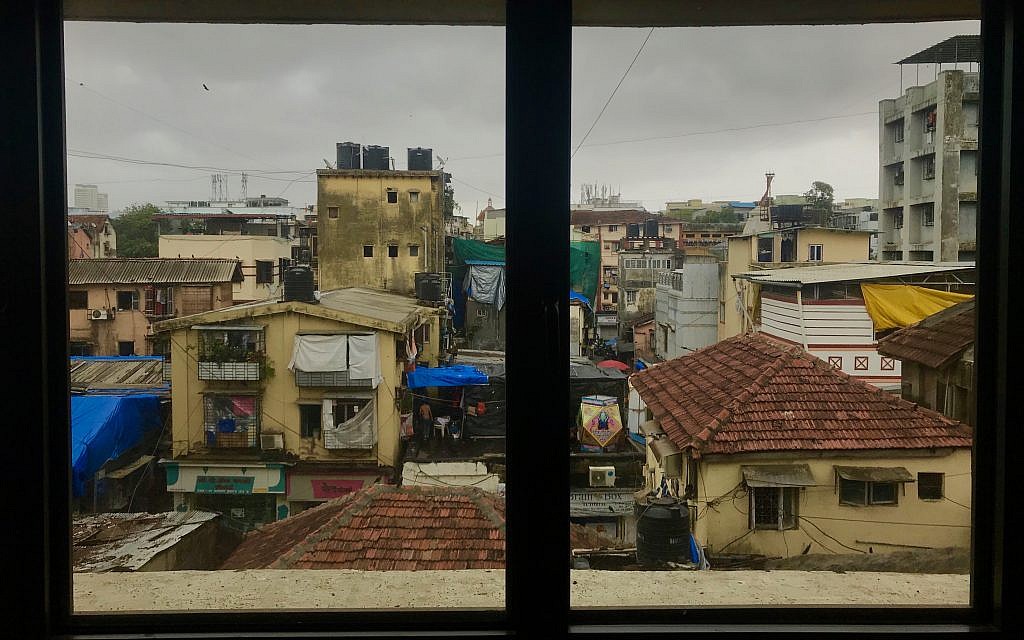 The view from the Chabad House in Mumbai overlooks the Colaba district. Miriam Groner/JW

Further north in the city, a JCC funded by the JDC hosts a regular rotation of programming including a preschool, Torah classes, day camps and women’s retreats. The young Jews we met there seemed to marry their dual identities of being Indian and Jewish with immense pride.

Another badge of honor — they all mentioned their strong ties with the other local Hindu and Muslim communities, many of whom they bring to JCC programs. The young single Jews we met face a telling dilemma: While they feel pressure to make aliyah or move to the U.S. to meet other Jews, they have no strong desire to leave India. Some are eager to make the move but feel compelled to stay to care for aging family. It’s a universal predicament made all the more urgent here where the small community seems to rely on every individual. 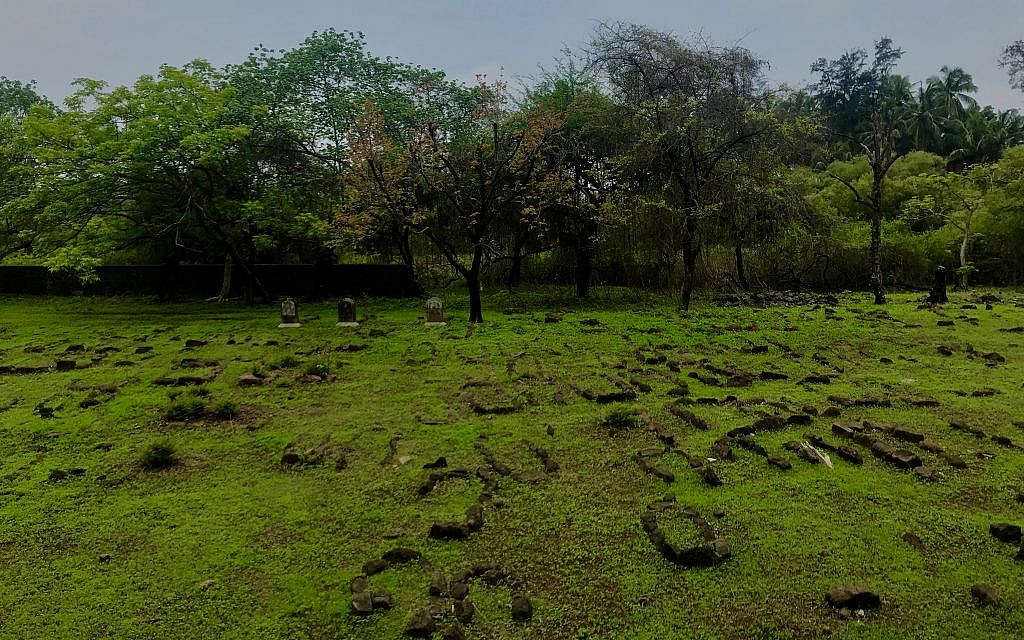 A Jewish cemetery on the Konkan Coast, south of Mumbai. Benei Israeli Jews escaping the Roman invasion of Israel in the Second Temple period settled here after their boat was shipwrecked. Miriam Groner/JW

An old-age home, also funded by  JDC, houses 10 or so residents, who were thrilled to meet young, American Jews. One told me about growing up in pre-Partition India where her father had worked for the British as a railway conductor. Another read us her poetry and another gifted us with his extra Gandhi-style cap. They all asked us to come back again.

Reflecting on these visits back home in Brooklyn, a cup of chai warming my hands, it’s both despairing and inspiring to witness this small community of Jews clinging to community, tradition and faith. At a time when so many young American Jews are pushing against the structures of traditional institutions, it was a humbling reminder that this is a luxury not afforded to all.

For more photos and musings from Miriam’s India visit, check out her photo essay here.