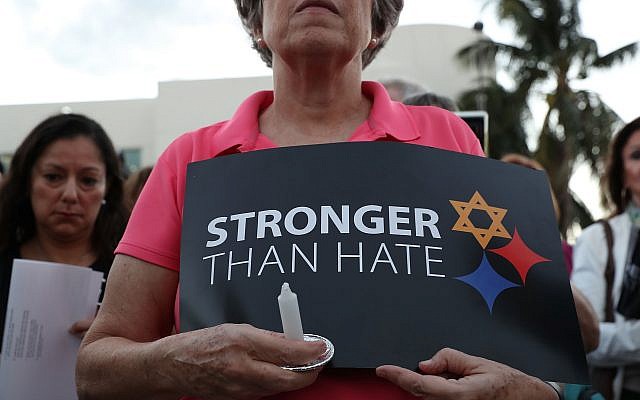 Following the worst anti-Semitic attack in American history, which occurred on Oct. 27, at the Tree of Life Synagogue in Pittsburgh, individuals and communities around the country have been responding with action and heartfelt words.

Just moments after alleged killer, Robert Bower, shot 11 Jews dead and wounded six more during their Shabbat morning services, Bower was treated at the Allegheny General Hospital emergency room. He was wheeled into the hospital shouting “death to the Jews.” The president of the hospital, Dr. Jeffrey K. Cohen, and the trauma nurse, Ari Mahler, were both members of the Tree of Life Synagogue and were on call upon Bower’s arrival. Dr. Cohen, who knew nine of the 11 victims, told the shooter, “We’re here to take care of sick people. We’re not here to judge you.” He then checked on Bower and asked if he was in pain, to which Bower asked, “Who are you?” Dr. Cohen responded with his name and then left the room. Cohen explained that “you lead by example;” therefore, he treated the perpetrator of grave inhumanity with human dignity.

The trauma nurse opened up about his experience following the shooting on Facebook. While treating Bower, he claimed to have no intention of sharing his religion with him, as he only wanted to show compassion and empathy. He says he looked beyond Bower’s abhorrent anti-Semitism and treated Bower with compassion because of love. Mahler wanted to remind the nation that “love as an action is more powerful than words, and love in the face of evil gives others hope.” He wrote in his post: “love is the only message I wish to instill in you. If my actions mean anything, love means everything.” After receiving an overwhelming amount of support, he shared another post illustrating how to respond and make a change: “The ability to scream the loudest doesn’t make your impact the greatest. It’s the words that matter. The feelings behind them. The genuineness found in your heart.”

Schools in neighboring states sent letters to the brave officers who risked their lives to apprehend the shooter, to the survivors and to the families of the victims. Local Jewish schools delivered bagels and donuts to the Pittsburgh police department who responded to the shooting. The walls of the police department are decorated with letters from children expressing their gratitude.

At the Pittsburgh Penguins’ first game after the shooting, the players sported “Stronger Than Hate” patches on their jerseys. Before the game began, they held an 11-second moment of silence for the victims and honored the two police officers who suffered injuries during the shooting. Ben Roethlisberger, the quarterback of the Pittsburgh Steelers, wore “Stronger Than Hate” sneakers. Likewise, Julian Edelman of the New England Patriots wore a “Stronger Than Hate” hat to show his support. Inspired by the cover of the Pittsburgh Post-Gazette that had the first words of Kaddish, NBC Nightly News ended their Friday night broadcast by reciting Kaddish in memory of the 11 victims. New York Governor Andrew Cuomo had flags of state buildings flown at half-staff from Monday, Oct. 29, through Sunday, Nov. 4.

The response to the attack has united interfaith communities. Just hours after the shooting, thousands gathered at the Sixth Presbyterian Church in Pittsburgh. The reverend began the vigil by telling the congregation that they must support their Jewish neighbors. Central Synagogue, located in New York City, held an interfaith vigil. Some noteworthy attendees included: Rabbi Chaim Steinmetz of Kehilath Jeshurun, Cardinal Timothy Dolan and Rabbi Angela Buchdahl of Central Synagogue. An interfaith vigil was also held in Temple Emanu-El of New York, which Mayor Bill de Blasio attended. At the annual International Conference of Chabad-Lubavitch Emissaries, the rabbis from around the world surrounded the Pittsburgh rabbis and recited Tehillim in honor of the victims of the tragedy. The week after the attack, Jewish communities all across the globe were encouraged to attend Sabbath services, with the hashtag, #ShowUpForShabbat, trending on social media. Others, like Steve Dubinsky, who does not normally wear a kippa, decided that for the next 30 days he would wear one in remembrance of the shooting.

On a more national level, this shooting gave rise to the issue of gun control and armed guards in places of worship, something which President Trump supports. President Trump stated that had there been an armed guard, “Maybe there might have been nobody killed except for him.” His position was met with a variety of responses. The mayor of Pittsburgh, Bill Peduto, rejected Trump’s statement and said they should not make laws around Bower’s irrationality. Mayor Bill de Blasio said that “Houses of worship do not have to have armed guards to be able to practice their religion. That’s not America.” However, he also said that in the coming days after the attack, he will station NYPD officers outside Jewish community gatherings. Ray Kelly, a former NYPD Commissioner, argued that four police officers were wounded in the attack at the Tree of Life Synagogue, so any armed guard at a place of worship under attack would likely be the first one killed. Kelly insisted that there be more active shooter drills instead. Eric Adams, the Brooklyn Borough president and a former NYPD officer, encouraged off-duty officers to bring their guns with them when they go to church, in support of Trump’s call for armed guards at places of worship.

The worst attack on American Jewry in history has initiated a response both on an individual and national level. This response has united people of different faiths, political leanings and regions; they have echoed its message across sports field’s and social media; hate must be brought to its knees.