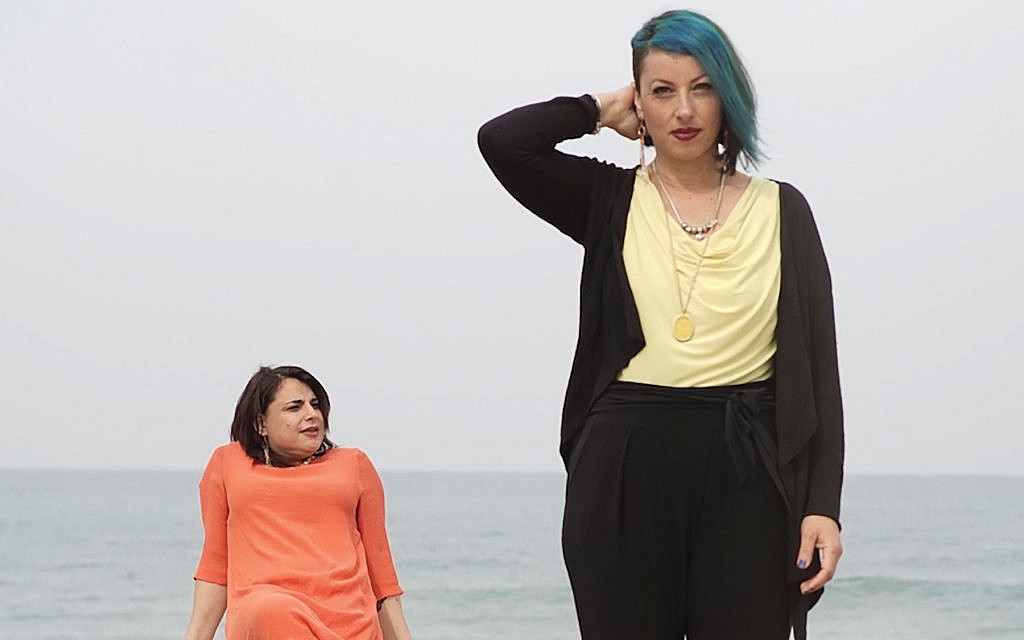 Amit Tsuk, left, with her former wife, Galit, in a promotional photo for the film “Family in Transition.”

JTA – It’s like the Amazon Studios series “Transparent” — only it’s real, not fiction.

The Israeli documentary “Family in Transition” revolves around Amit Tsuk, a 40-year-old married man and father of four, who reveals to his family that he has always wanted to become a woman.

The 70-minute film, which opened last Friday here after opening last week in Los Angeles, shares more than a few similarities with “Transparent,” in which a Jewish patriarch makes the same declaration to his wife and children. But Amit has perhaps even more support from her family.

One of the first scenes in the movie depicts her applying makeup as her 12-year-old daughter offers earrings as a present.

In a telephone interview from her home in Nahariya, a small city in northern Israel, Amit said she knew she was a girl from the age of 4. By 11 she was secretly dressing up in her mother’s clothes.

“I felt uncomfortable in my body, but I had no idea what was happening to me,” she said. “At the age of 15, I met my future wife, Galit, and fell in love. I was sexually attracted to her. I tried to be an extreme man.”

But living as a male, she said, proved “hell on earth.”

“I envied every woman I saw walking down the street. About four years ago, I just couldn’t take it anymore,” Amit said.

During one fraught night, Amit confessed her secret to Galit.

“We spent two days crying,” she recalled. “But Galit told me that she loved me and would try to go through the process with me and keep the family together.”

(Similarly, in “Transparent,” the protagonist Maura, played by Jeffrey Tambor, remains attracted to women after coming out as transgender.)

“Life in Transition” won the best Israeli documentary award at Docaviv, Tel Aviv’s international documentary festival. It goes on to show how Galit struggles to deal with Amit’s mood swings, which occur in part as a result of her hormonal therapy. She also finds her role as Amit’s caretaker to be daunting, especially around the time of a sexual reassignment surgery in Thailand.

Interviews reveal how the couple eventually grows apart and the effects the transition has on their children, who initially care more about the couple’s possible separation than Amit’s desire to become a woman.

The family’s journey is made even more difficult because they live in Nahariya, home to many socially conservative and Orthodox Jewish residents. Neighbors have spewed slurs at Tsuk family members and bullied the children in school.

The movie’s director, Ofir Trainin, first met the Tsuks while making a short documentary about a group that supports families of transgender people in Israel. He was drawn to the subject because of his own family’s experience when his older brother came out as gay on their kibbutz in southern Israel 20 years ago.

“I was extremely shocked because my brother always had the most beautiful girlfriends,” Trainin said in a telephone interview from Tel Aviv. “He was one of the first kibbutz members to come out of the closet. My parents accepted him from the beginning, but it was difficult for them. They thought, ‘What were the neighbors going to say?’”

The filmmaker’s goal in making the documentary was to show such families that “There is hope, that things will get better, that, it will be all right,” he said.

Yet when Trainin first approached Amit about appearing in the film, she was reluctant, lest the movie create even more hostilities toward her children.

“She actually ran out of the house rather than talk to me,” he recalled.

But when Amit returned home later that day, Trainin was waiting for her. The filmmaker convinced her to participate in the documentary by emphasizing that it was intended to promote tolerance for transgender people and other besieged groups — and that it would focus upon the response of her entire family.

Trainin also decided to eschew questions about the couple’s sex life during Amit’s transition and afterward.

He was surprised when Galit, exhausted after serving as Amit’s constant caregiver, was motivated to begin her own journey of self-discovery. That journey ends with the couple seeking a divorce in a rabbinical court, where Amit is humiliated as she is forced to testify as a man.

Amit told JTA that since the movie was filmed, she has remarried a woman and now considers herself a lesbian. Galit, too, is living with another woman.

Amit hopes the film will raise awareness about transgender issues in Israel, where that community remains as stigmatized “as gays were 30 years ago,” she said. Most transgender people cannot live an open life except in Tel Aviv, she added. But she believes their situation isn’t much worse than it is for transgender people in the United States, where the current president has been openly hostile to the community.

These days, Amit has mostly encountered acceptance in Nahariya, with one prominent exception: her father, who no longer speaks to her.

But she is heartened that the movie has been well received in the Jewish state.

“I’m the happiest woman in the world,” she said.