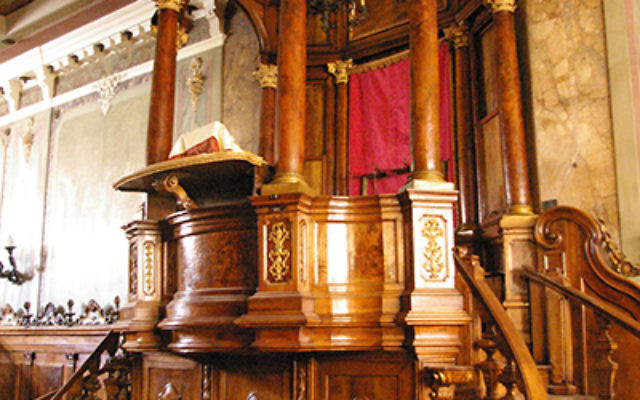 As I made the transition from pulpit to pew, after retiring from the rabbinate, I saw things I had not noticed over 45 years serving one congregation. My shul hopping during a six-month residence in New York City took me to synagogues of all stripes: Reform, Conservative, Orthodox and Renewal. Of course, some of what I saw was specific to particular denominations but one practice was common to all. Seemingly innocuous and insignificant, it actually reflected an institutional shift from when I began my rabbinate some 50 years ago.

It happened in every synagogue during the processional when the Torah was removed and later returned to the ark. That was the eagerness of each worshipper to shake hands, have eye contact, shmooze, and/or exchange a word with the rabbi as he/she marched behind the Torah. And the eagerness of every rabbi to reciprocate that need by doing the same.

I never did this "shake and greet" during the Torah processional in my 45 years.  Nor did my father, a Conservative rabbi for over 40 years in a congregation in Columbus, Ohio. Sure, both of us shmoozed plenty with congregants at kiddush,  in our office  and in their homes, and even at  the local  supermarket. But not in the Torah processional. That ritual was too sacred to be transformed into an appendage to shaking and greeting.

What was the original intent of the Torah processional? Some suggest that it was a practical necessity in the ancient synagogue in order to relocate the Torah from an adjacent room where the scrolls were stored to a central and elevated table from which it was read. Others conjecture that it was to move the scroll "among the people" before the people listened to its sacred words. Even in the ancient Temple, according to the Mishnah, the Torah was passed around among attendants until given eventually to the High Priest who read the Yom Kippur portion.

Whatever its origins, the center of attention was clearly the Torah scroll minus the social add-on. "Why the change?  I asked Professor Jenna Weissman Joselit of the George Washington University, who specializes in the history, culture and daily life of America's Jews.  "I can only conjecture," she said, "but maybe it has to do with the recent changes in American Jewry's understanding of, and relationship, to the rabbinate, rendering its members less of an authority figure and, well, one of the boys.”

She added the that the impact of feminism and the chavurah movement, “with its anti-clerical and anti-establishment orientation,” figures here, too.  It all adds up to a heightened emphasis on intimacy and sociability and a diminished emphasis on the kinds of attributes that earlier generations of rabbis prized.”

Am I the only one who regards the "shake and greet" as an unwelcome nick in the sacredness of the Torah service and function of the rabbi? I asked some colleagues how they felt.

Rabbi David Krishef of Congregation Ahavas Israel in Grand Rapids, Michigan agreed with me. He said that “in the process the Torah is ignored… the cantor gets drowned out in the chatter… the total effect is pathetic and a disgrace to the Torah…and it is the rabbi who should set the example of focusing on the Torah and prayers rather than the socializing,"

Rabbi Daniel Goldfarb, from Jerusalem, who frequently leads High Holidays services in the U.S., feels differently. He regarded the procedure as a nuisance until someone in the last row of a shul thanked him for coming around. “That handshake, that 'nice to see you,' could touch them as much or perhaps more than all we say from the bimah maybe 25 yards from where they are sitting as the crow flies but light years away in spirit," he said.

Sorry to be the Grinch who steals Shabbat, but all this accessibility and shmoozing has often been at the expense of the more sacred and substantive. The visual Torah as a symbol risks being eclipsed by the trivial and token.  After all, how much substantive conversation and engagement with a congregant can a rabbi have when, like a political candidate, she hurries through like a religious rope line in order to get to the next person?

I welcome rabbinic accessibility, approachability, and friendliness. But those positive qualities can be displayed in a more serious venue in the rabbi's study or even next to someone at the kiddush table. And if we still need the token handshake or quick greeting, let's restore the receiving line after services rather than invade the sacred and primary space of the Torah as it is marched among the people.