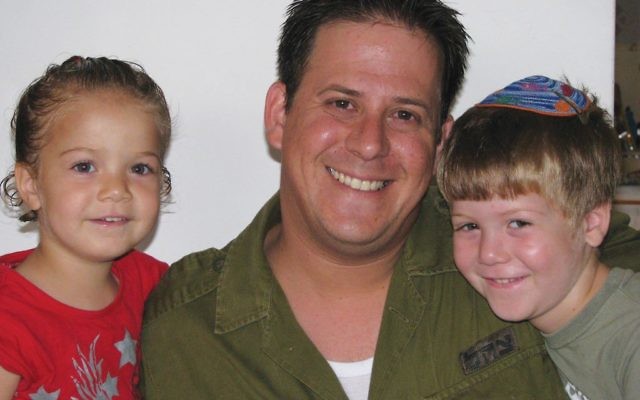 Elad Salomon, who was killed in the Halamish attack, with two of his children. Facebook

It’s long been agreed that American Jews are less emotionally involved with Israel with every passing year, but are even the activists less active? Sometimes, Sherlock Holmes would say, the evidence can simply be the quiet of the night, the dog that didn’t bark.

In “The Adventure of Silver Blaze,” a horse was stolen, its trainer was murdered, and what most struck Holmes was that no one heard any barking. Holmes concluded that the killer was so familiar, the night was so ordinary, that the dog who saw it all thought nothing of it.

At some point, in every generation, enough Jews die and dogs don’t bark.

On July 21, after their Shabbat meal, a Palestinian knocked on the door of the Salomon family in Neve Tzuf-Halamish, and within minutes knifed three Jews to death — Yosef Salomon, 70, his daughter Chaya, 46, and his son Elad, 36. Their extended family was together for Shabbat to celebrate the birth that morning of a new grandson in the family. They were expecting friends to come by for a Sholom Zachor celebrating the baby’s first Shabbat. The first to knock on the door was Omar al-Abed al-Jalil, 19, a Palestinian from a nearby village. Chaya opened the door, was stabbed to death, and soon Yosef and Elad were too. An IDF soldier heard the screams and shot the killer through the window. The Salomons’ dying blood was on their Shabbos clothes, the sofa, wall-to-wall, and on each of the five stairs leading to where five children were hiding.

Unlike other recent massacres, there was quiet in New York. Unlike last year, when Jews took to the streets to protest the Iran deal; to protest the Klinghoffer opera at Lincoln Center; unlike the halls and shuls of all denominations that were filled when Chabad’s Holzberg family was murdered in Mumbai in 2008; unlike a similar response to the murder of the five-member Fogel family on a Shabbat in Israel’s Itamar in 2011, this time there were no protests, no rallies, no speeches, no placards.

Yosef, Chaya and Elad were mentioned, among others, at the annual outdoor Tisha b’Av service “for endangered Jews,” though the Salomons surely did not feel endangered when relaxing at their Shabbat table. Now, even the annual Tisha b’Av protest, led by veteran activists Rabbi Avi Weiss and Glenn Richter, is calling it quits after 40 years.

Perhaps summer is just a bad time for rallies. But in July 2007, more than 3,000 Jews showed up at a solidarity rally near the United Nations to call attention to then-prisoners Gilad Shalit, Ehud Goldwasser and Eldad Regev. Jews chartered busses from Toronto, Baltimore and Washington. Hundreds of teens came from the Berkshires, Poconos and Catskills; from Camp Ramah (Conservative), Camps Kutz and Harlam (Reform), Camp Moshava (Orthodox) and a half-dozen others. At that rally, on the sidewalk, Irwin Kula, the president of Clal – the National Jewish Center for Learning and Leadership, pointed out to us that this rally was on a weekday, in the “middle of summer, no one is around, and meanwhile these kids are proud to be here, even if they had to be on a bus for four hours… . This isn’t some program about Jewish identity, this is real ‘Jewing,’ this is what Jews do.”

But Jews did not do that in the summer of ‘17. I asked more than 2,000 people on Facebook whether anyone knew of a Shloshim event for the Salomons, the Shloshim traditionally commemorating the first 30 days since burial. Not one of the 2,000 knew of anything.

The Salomons died in Israel but distance never mattered to Jewish solidarity. When the French Jew Alfred Dreyfus was on trial for treason in the 1890s, more than a thousand miles away, wrote Sholom Aleichem, “the entire shtetl instantly took Dreyfus to heart. He became one of theirs, a Kasrilevker.”

In 1913, when Mendel Beilis was jailed for a blood libel in Ukraine, Jews filled the Grand Opera House in Chicago in solidarity.

In 1933, Bronx Jews filled the Kingsbridge Armory in solidarity with the Jews of Germany.

In 1944, Jews filled the Lower East Side “Warsaw” shul in a long-distance shiva for the Jews of Warsaw.

In 1952, when 13 Jewish writers were killed in a Moscow prison, the famous “Night of the Murdered Poets,” Jews gathered in New York and continue to do so every August.

In 2011, after the Fogel family was murdered, Malcolm Hoenlein, executive vice chairman of the Conference of Presidents of Major American Jewish Organizations, suggested a memorial service that was quickly co-sponsored by 40 diverse Jewish organizations. “We need to comfort one another, to strengthen one another, to mourn together,” said Hoenlein at the time. “You can’t let a family be massacred and remain silent.”

As Kula said, “This is what Jews do.”

When we contacted the Presidents Conference about a Salomon memorial, we were told that Hoenlein was travelling and unavailable for comment, and a second executive didn’t respond either.

We asked Rabbi Haskel Lookstein, rabbi emeritus of Kehilath Jeshurun, if his shul is planning to be the venue for a Salomon event, as his shul was for the Fogels? He replied, “That was initiated by the organized Jewish community, the Presidents Conference.” Told that nothing similar is happening this time, he said, “Right. Our response is not to have a rally but to help” with charity for the surviving widows and orphans. But does charity preclude the community coming together? “It doesn’t, but we’re only a shul. We can’t organize rallies. That can only be done by the organized Jewish community. We’d be more than ready to participate in such an event but we’re only a local shul.”

If Rabbi Lookstein, though, was waiting for the JCRC to organize a vigil or shaloshim for the Salomons it wasn’t going to happen. A JCRC official, who asked not to be identified, told us that not only was nothing planned but the era of Fogel-type solidarity rallies may be over. He noticed that one Jewish group that had always commemorated the “Night of the Murdered Poets” with a gathering, “this year mailed a portfolio of poems, instead. Gatherings might be out,” he said, a thing of the past. Nevertheless, the Hebrew Institute of Riverdale, which did not hold a communal vigil for the Salomon tragedy, invited congregants to a communal vigil for the Charlottesville tragedy.

The grassroots is responding on their own to the Salomons’ murder. Jacob Katz, 18, a Florida student who will enter the IDF in late August, opened a “gofundme” grassroots effort to raise $60,000 for the surviving Salomons. He raised $60,070 from 557 people in 21 days, mostly through small donations of $18 and $36. Rabbi Lookstein’s Kehilath Jeshurun, Lincoln Square Synagogue, Hebrew Institute of Riverdale, the Young Israel of Hillcrest and several other synagogues raised money for the Salomons, too.

The surviving Salomons surely need financial assistance, but here in New York, beyond writing a check, “we need to comfort one another,” as Hoenlein said, we have a need to physically come together at times like this. There is something soulful and inspirational in a shiva-call of a gathering where we can learn about remarkable Jews whom we never would have known were it not for tragedy.

Chaya Salomon, for example, was a second grade morah (teacher). When she handed out her final report cards, just weeks before her murder, she wrote “Dear student,” there is a more important report card, “given by our Father in Heaven.” His grades are not for math or science but for “friendliness, patience, understanding, love, kindness, responsibility, gratitude, humility. And this other report card is important, even more than any other grade.” Never forget, she wrote her students, “being a person with good midos [character] is the real test in life! Good luck, Morah Chaya.”

If I were a dog I’d be howling at the moon.