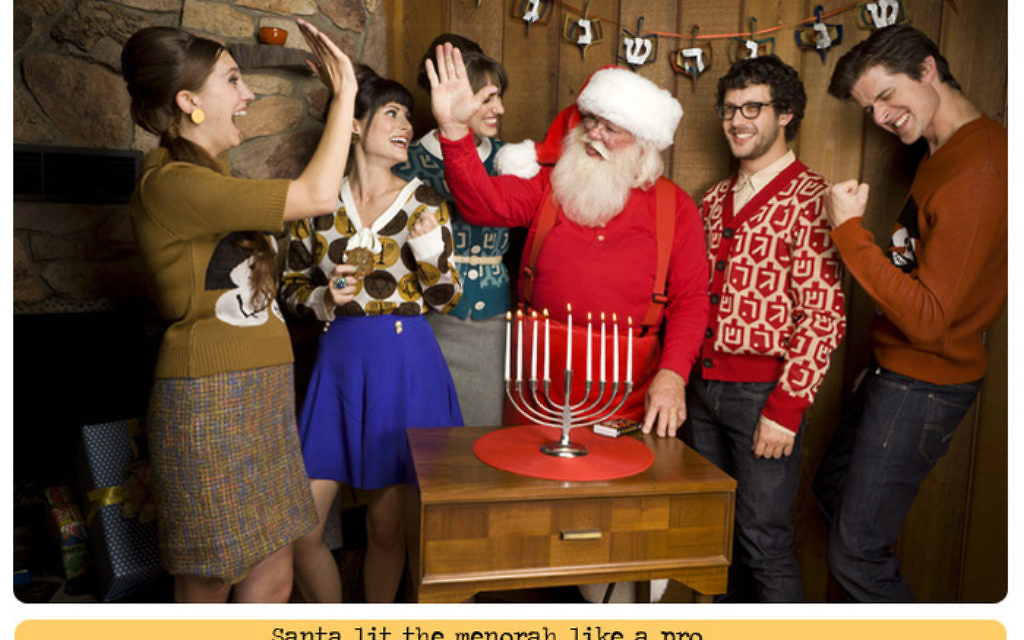 Have you ever wanted to attend a party in December wearing a sweater that bears large dreidels or Jewish star or the design of a chasidic snowman?

If so, you have only a few days left to make it happen.

Carin Agiman, a fashion-industry accountant and Jewish designer from California, a "culturally Jewish" member of Tunisian-Turkish-Romanian-family, has formed Geltfiend, a company that specializes in fashion-forward Chanukah sweaters, and she’s trying to raise $20,000 to jumpstart the enterprise on kickstarter.com, an online “crowd-funding,” fund-raising platform. Her deadline is Sept. 5.

“All funding through this Kickstarter,” Agiman explains on the website, “will go right towards paying for actual sweater-production.”

“I’ve … always wanted to put my heart and soul into a creative project of my own,” Agiman states on Kickstarter. “I’m the daughter of immigrants that really struggled with American holidays, never knowing to what degree us Jews were supposed to participate. These days, being Jewish and being American seem very reconcilable, and Geltfiend is a celebration of that union between culture and national identity.”

“While they may not be classically ‘ugly’ Christmas sweaters,” JTA recently wrote, “wear them to your next bash and be the shamash of the party!”

“It’s about time that we had something awesome to wear around the holidays,” Agiman’s Kickstarter pitch states. “Chanukah deserves the love – it’s been the ugly stepsister for a while.”

"I've been invited to Christmas sweater parties … and have been disappointed to find out that we Jews didn't have much going on in the holiday apparel department," she says.

The name of her company comes from her liking for Chanukah gelt, the popular holiday sweet. "I've been notorious," Agiman says in an email interview, "for eating my way through my pile long before the dreidle game gets started."

The Kickstarter “Chanukah Sweaters Project” section features a photo of a portly Santa, at a Chanukah party, high-fiving a woman who’s wearing one of the company’s sweaters, with the caption underneath: “Santa lit the menorah like a pro. ‘We couldn’t have done it better,’ the Jews joyfully admitted.”

“We’re taking back the holidays, one Chanukah sweater at a time!” the pitch warns. “Whether you’re Jewish or not, everything is better in the sweater.”

The “completely animal-friendly” sweaters, 95% Acrylic and 5% Spandex, will come in four sizes – S, M, L and XL – “for both the men’s styles and the women’s styles.”

“I can’t wait to celebrate this Chanukah knowing that Geltfiend has made those Chanukah candles burn juuuust a little brighter,” Agiman says. "

Ten percent of any sweater sales will go to the Jewish Heart for Africa organization.