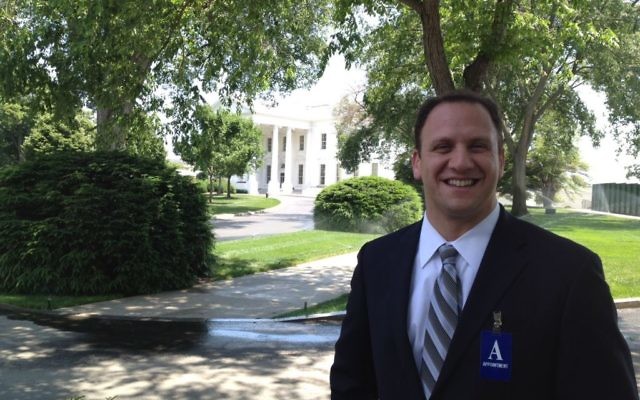 Last week, I had the honor of sitting at a table with the President of the United States in the Roosevelt Room at The White House.  President Obama and his Chief of Staff, Jacob Lew, wanted to hear from Conservative rabbis from around the country.  It was a meeting I will remember for the rest of my life.

I will remember getting the call on Thursday afternoon asking if, right after Memorial Day weekend, I could come to Washington, DC to meet with the President.  I will remember waiting at the security booth as they checked my driver’s license and gave me my pass to walk through the gates.  I will remember the thrill of standing as the President entered the room and how my hand felt to shake his hand, twice (once at the beginning of the meeting, once at the end).

The meeting proceeded for 30 minutes, during which the President addressed questions posed to him by leaders in the Conservative movement about religious leadership, the role of faith in consideration of societal concerns and the President’s attitudes about Israel. My colleagues and I also spent 30 minutes with Lew during which we talked about matters including the Mid-East peace process, immigration, Iran, LGBT issues and social justice concerns. Our group also mentioned existing Rabbinical Assembly resolutions on Jonathan Pollard and the location of the American Embassy in Israel.

But I want to focus on just one moment.

After the President shook everyone’s hand, he asked everyone to be seated. Rabbi Julie Schonfeld then explained that it is Jewish tradition to recite a blessing upon seeing a Head of State. The President said that he was familiar with the practice and invited her to proceed. She said:

Blessed are You Adonai Our God Who gave of His glory to flesh and blood.

We all answered “Amen” – my first time saying “Amen” to that particular blessing – and then the meeting began.  Saying that blessing in the presence of the President was not always common practice. The Talmudic origin was to say the blessing in the presence of a king, not a President.  In 1973, Conservative Rabbi Seymour Siegel caused a controversy by announcing that he would include the blessing in his prayer at the inauguration of President Richard Nixon because, "throughout Jewish history, rabbis and other learned Jews have recited these blessings when they have called upon or received kings, governors, and other high civil officials [because] according to Jewish traditional practice and precedent, [they] may be recited whenever one is in the presence of someone who holds chief executive office in a political sovereignty.”

What is that blessing about?  What does it mean to stand before a king or a President and begin the conversation by thanking God for having given some of the Divine glory to a human being?  On the one hand, the blessing is supreme praise for the Office of the Presidency and the one who holds that office.  Saying the blessing communicates not only to God, but to everyone in the room, including the president, that the Presidency carries with it such weight so as to be a reflection of the Divine image.  At the same time, the blessing also says to a king or a president, quite astoundingly, “your power is not yours; it comes from God.”

As I said, “Amen,” to the blessing, I was filled not only with a sense of awe, and not only with a sense of gratitude to God for having brought me inside the West Wing of the White House to sit before the President of the United States.  I was filled with a tremendous sense of appreciation that the Jewish people, long suffering, persecuted, excluded from power, were not only invited to such a place, but encouraged to say our blessing out loud, and that all present in the room, including the pesident, answered, “Amen.”