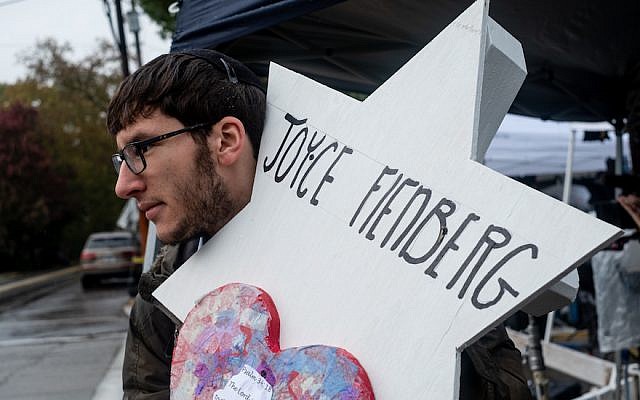 A mourner carrying a temporary memorial marker for Joyce Fienberg, who was killed in the synagogue shooting in Pittsburgh, Oct. 28, 2018. JTA

In the weeks after Marnie Fienberg, a business communications consultant from the Washington area, lost her mother-in-law, Joyce Fienberg, in the anti-Semitic massacre last October at Pittsburgh’s Tree of Life synagogue, she heard one constant question from friends who tried to console: “How can I help?”

At first, she says, she thought they meant, “How can I help you get through this sorrow?”

Soon she realized that they were also asking, “How can I prevent this from happening again?”

The answer, she decided, would come at this year’s Passover seders — hundreds of seders in the United States and Canada.

Fienberg is the founder, and fundraiser from volunteer contributors, of “2 for Seder” (2forseder.org), an independent, “grassroots” organization that is encouraging members of the Jewish community to invite two non-Jews — including at least one who has not attended a seder before — to their seders.

It’s what Joyce Fienberg would have wanted, her daughter-in-law says.

If anti-Semitism, like all forms of prejudice, stems from ignorance of a hated group of people, a seder’s hours of ritual and readings and socializing “gives you an idea of what Jewish people are about,” says Fienberg, who married into a Pittsburgh family and has frequently visited the Pennsylvania city. 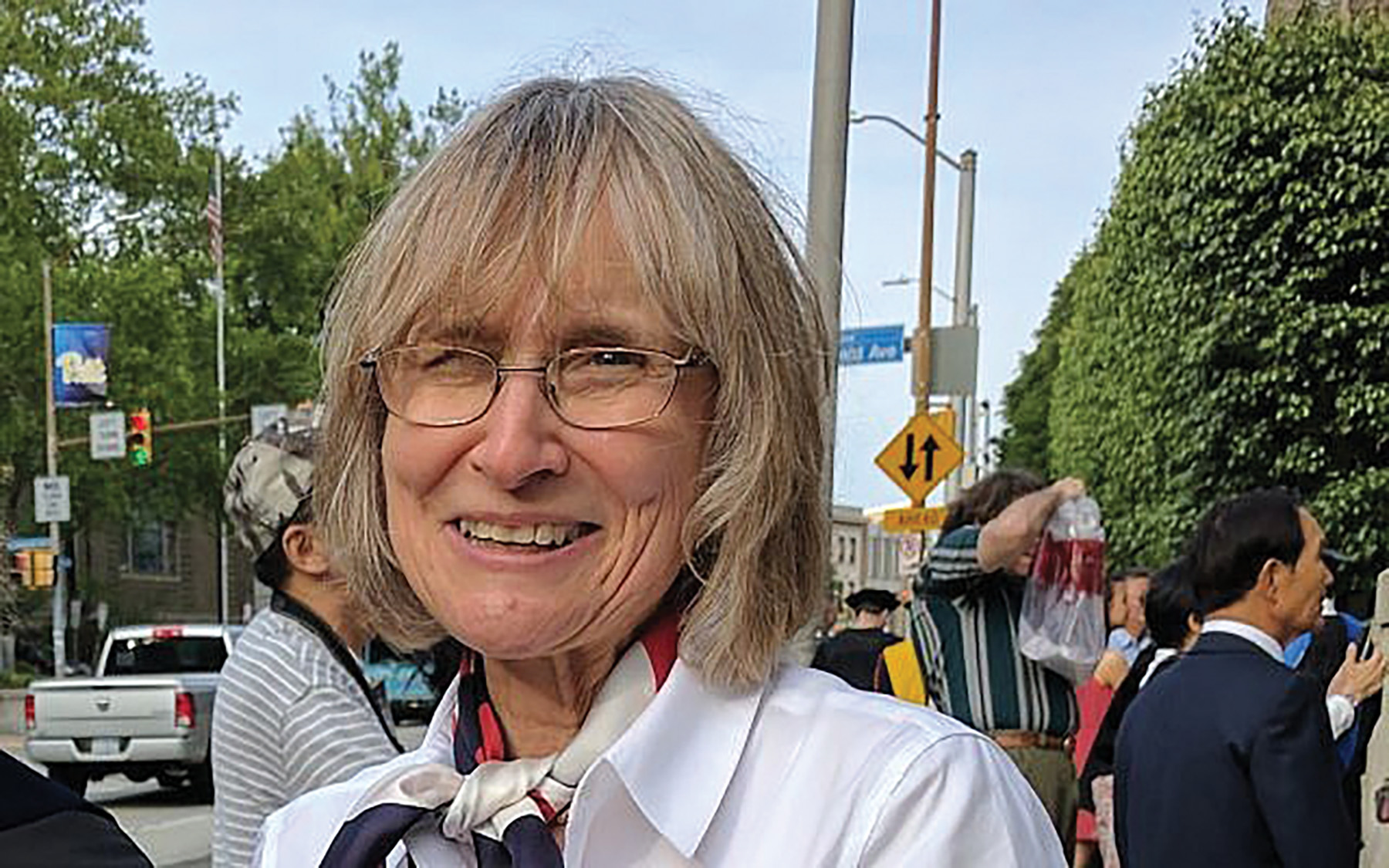 Joyce Fienberg, a victim of the Tree of Life attack, is the inspiration for her daughter-in-law’s “2 for Seder” campaign. PHOTO Courtesy Mannie Fienberg

Whereas questions about Jewish culture and practice might seem out of place at a standard Shabbat or yom tov meal, a seder “is designed to ask questions,” she says.

Drawing on her professional experience, Fienberg has promoted her initiative through social media and the cooperation of several partnering Jewish organizations, and has produced a seder kit for people hosting a Pesach evening meal this year. The kit includes some background on anti-Semitism, a suggested introduction to the seder, a guide to the Haggadah, a “Passover Popovers” recipe (Joyce Fienberg’s), discussion questions from Rabbi Evan Ravski of Congregation Olam Tikvah in Fairfax, Va., and an essay from Tree of Life’s Rabbi Jeffrey Myers.

“A lack of understanding of our neighbors leads to misunderstandings and hurt,” Rabbi Myers writes. “By participating in 2 for Seder, you are directly addressing this issue and putting positive emotions and knowledge into the world.”

“People are more comfortable when they come [to an unfamiliar home] with someone,” Fienberg says. “People like to come as a couple.”

Fienberg’s goal is to have the leaders of at least 1,000 participating seders — home seders and communal seders — invite a pair of non-Jewish guests. Several hundred seder leaders across the U.S. and Canada had signed on by early this week, she says.

“If a thousand of us take a small step together, we will make a real impact,” she says. The guests “do not need to be your closest friends.”

Most participants, she says, were from members of the non-Orthodox community; for cultural and halachic reasons, many Orthodox Jews are reluctant to invite a non-Jew to their seder. 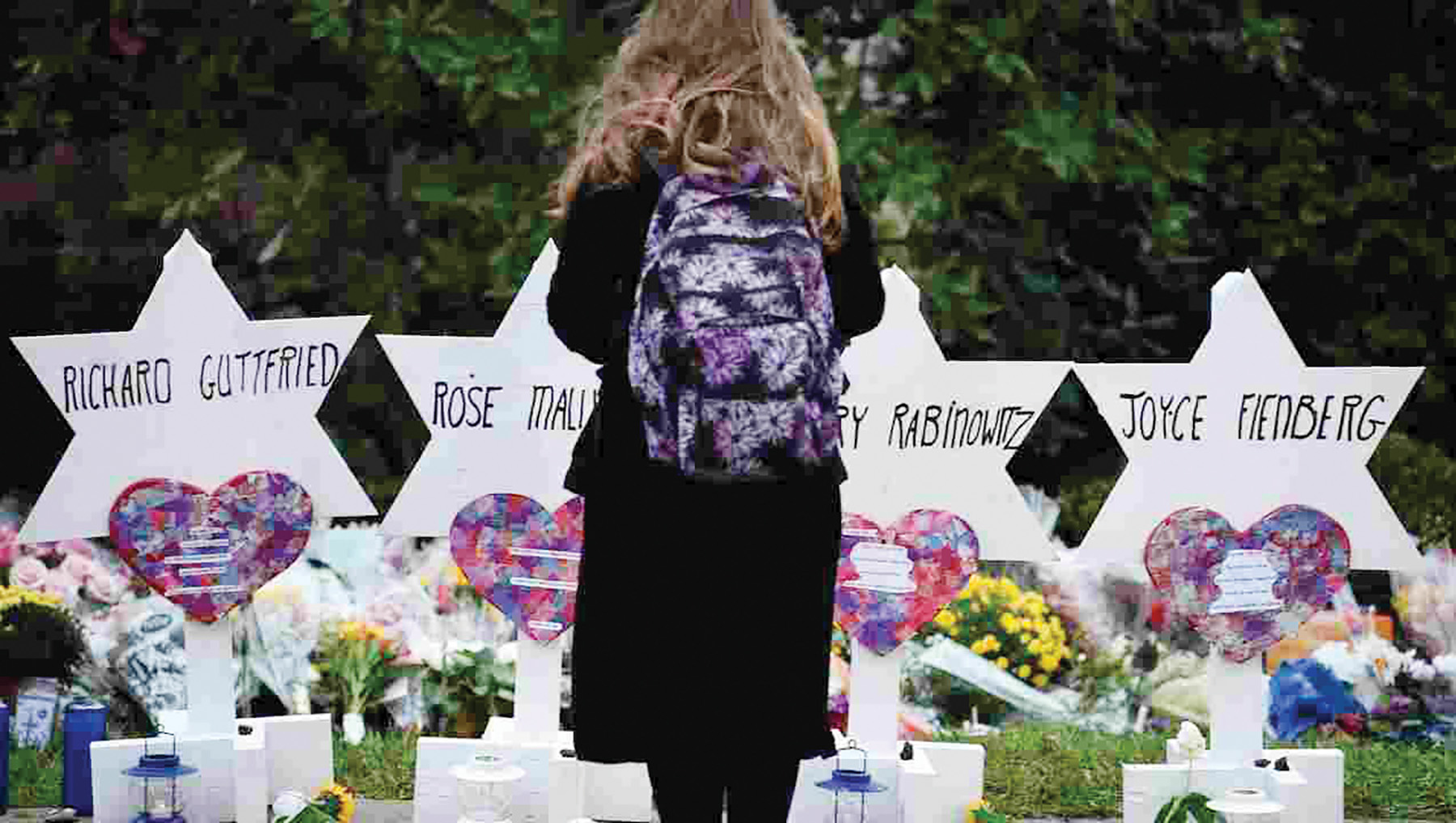 A makeshift memorial pops up outside near the Tree of Life Synagogue in Pittsburgh following the shooting in October. Getty Images

Fienberg says her late mother-in-law, whose husband died in 2016, frequently invited guests — “friends, neighbors, co-workers and international students” — from outside the Jewish community to Shabbat and holiday meals.

“I hosted Seder for the past 12 years with Joyce,” Fienberg writes in her seder kit’s introduction. “2 for Seder is held in honor of her memory.”

Joyce Fienberg, a Toronto native, a retired researcher at the University of Pittsburgh, was an active worshipper and volunteer at Tree of Life in recent years.

Fienberg’s partners in “2 for Seder” are Pittsburgh’s Jewish Community Center and the city’s Jewish Federation, the American Jewish Committee, Hadassah, the Anti-Defamation League, and several synagogues and Jewish organizations in this country and Canada.

For the first time in several years, Fienberg will not be hosting her own family seder this year. “I can’t make seder without her [her mother-in-law].” She’ll be at her friends’ house for both seders; she won’t be the only guest from outside the family there, she says. Her friends are taking part in “2 for Seder.”