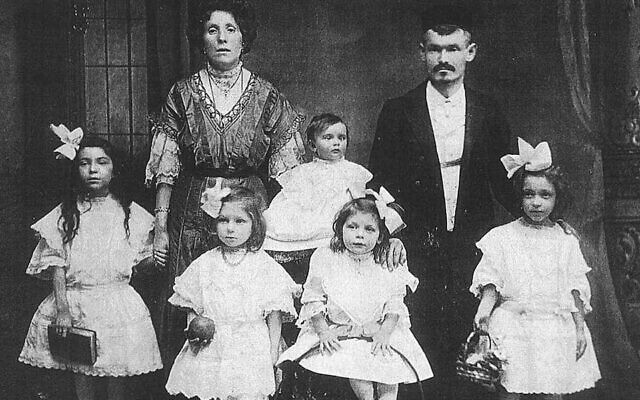 Cilly and Morris Brenner with the five daughters who would inspire the children's book series, "All-of-a-Kind Family," 1909. Author Sydney Taylor is second from left, holding an apple. (Courtesy of Judy Magid)

In Sydney Taylor’s 1951 book “All-of-a-Kind Family,” a young girl says to her sister,“You’ll have to make up with her when Yom Kippur comes.”

The dialogue is revolutionary. Few novels of the time — let alone one aimed at a children’s audience — would make so natural a reference to a Jewish holiday or, in this case, its relevance to everyday life.

“All-of-a-Kind Family” was the first from a mainstream publisher to highlight Jewish children. Set in 1912 and featuring the adventures of five sisters in a hardworking immigrant Jewish family on the Lower East Side, the book inspired a series, which went on to sell millions of copies and remains in print.

I hadn’t read the “All-of-a Kind Family” books since I read them over and over as a kid. Last week, I found four of the five volumes in the series in my local library and quickly went through them, remembering not only Ella, Henny, Sarah, Charlotte and Gertie but the connections my younger self had felt to each of them. To an adult reader, Taylor’s sentences remain vivid and her dialogue crisp and realistic. Anyone with siblings will appreciate the way these young women get along (and sometimes don’t — but end up making amends by the end of the chapter).

Taylor helped Jewish children see people like themselves and their traditions in the pages of books and also helped to bring Jewish culture to an American audience. Taylor was ahead of her times in many ways, as June Cummins has shown in the first-ever biography of the award-winning author, “From Sarah to Sydney: The Woman Behind ‘All-of-a-Kind Family’” (Yale University Press), written with Alexandra Dunietz. Taylor’s was a life of forward-thinking artistic expression.

Cummins researched widely and interviewed Taylor’s only daughter, Jo Taylor Marshall, and other relatives. Marshall granted her access to piles of Taylor’s materials in her New Jersey basement, including a locked trunk with diaries that Marshall had never opened.

The biography has a powerful back story: While working on the project, Cummins began suffering from ALS and her health deteriorated. When Cummins could no longer type or speak, she was able to dictate sentences using an eye-tracking communication device – she would look at a letter on a keyboard to spell out words and then sentences. Her husband, Jonathan Lewis, told The Jewish Week that she had written more than half of the draft when he arranged for their friend Alexandra Dunietz to help her. Dunietz, a historian specializing in medieval Islam, had no particular experience in Cummins’s field of study but was able to bring her historical sensibility to the project.

“June’s mind was as sharp as ever,” Dunietz, a research scholar at the University of Chicago, told The Jewish Week, noting her “grace and persistence” in working letter by letter. The two would bounce ideas off of each other as they finished the draft together and sent it off to Yale University Press.

Before her death in 2018 – after working just about every day during the previous two years — Cummins knew that the manuscript had been accepted. Dunietz then readied it for publication, trying to keep it in Cummins’s voice and style, as much as possible.

“I know that for June, working on this allowed a part of her to flourish, when so much was being taken away. It was a privilege for me to be able to help her,” Dunietz says.

In the book’s introduction, Cummins, who was a professor of English at San Diego State University and taught children’s literature, explains that she was drawn to Taylor as a subject when she included “All-of-a Kind Family” in her syllabus and noticed that very little had been written about her.

“I realized that Taylor was a transformational figure not only in American children’s literature but in American Jewish life as well,” Cummins writes. She adds: “Taylor’s semi-autobiographical books exemplified complicated issues of identity because their author’s life was rich with the possibilities of being a Jew in America.”

While “All-of-a Kind Family” is set lovingly on the Lower East Side, Cummins takes the reader further back into Taylor’s family’s history in turn-of-the-20th century Europe. Taylor’s mother Cecilia Marowitz, known as Cilly, was well-educated and cultured, the daughter of a prosperous businessman in Bremen, Germany; Taylor’s father Morris Brenner, the grandson of Polish rabbis, came to Bremen in search of a better job and worked for the Marowitz business. The family’s history is full of surprising and dark twists: a daughter left behind with another relative, incest, an open extramarital affair.

In 1900, Cilly and Morris immigrated together with their first child, settling on the Lower East Side. 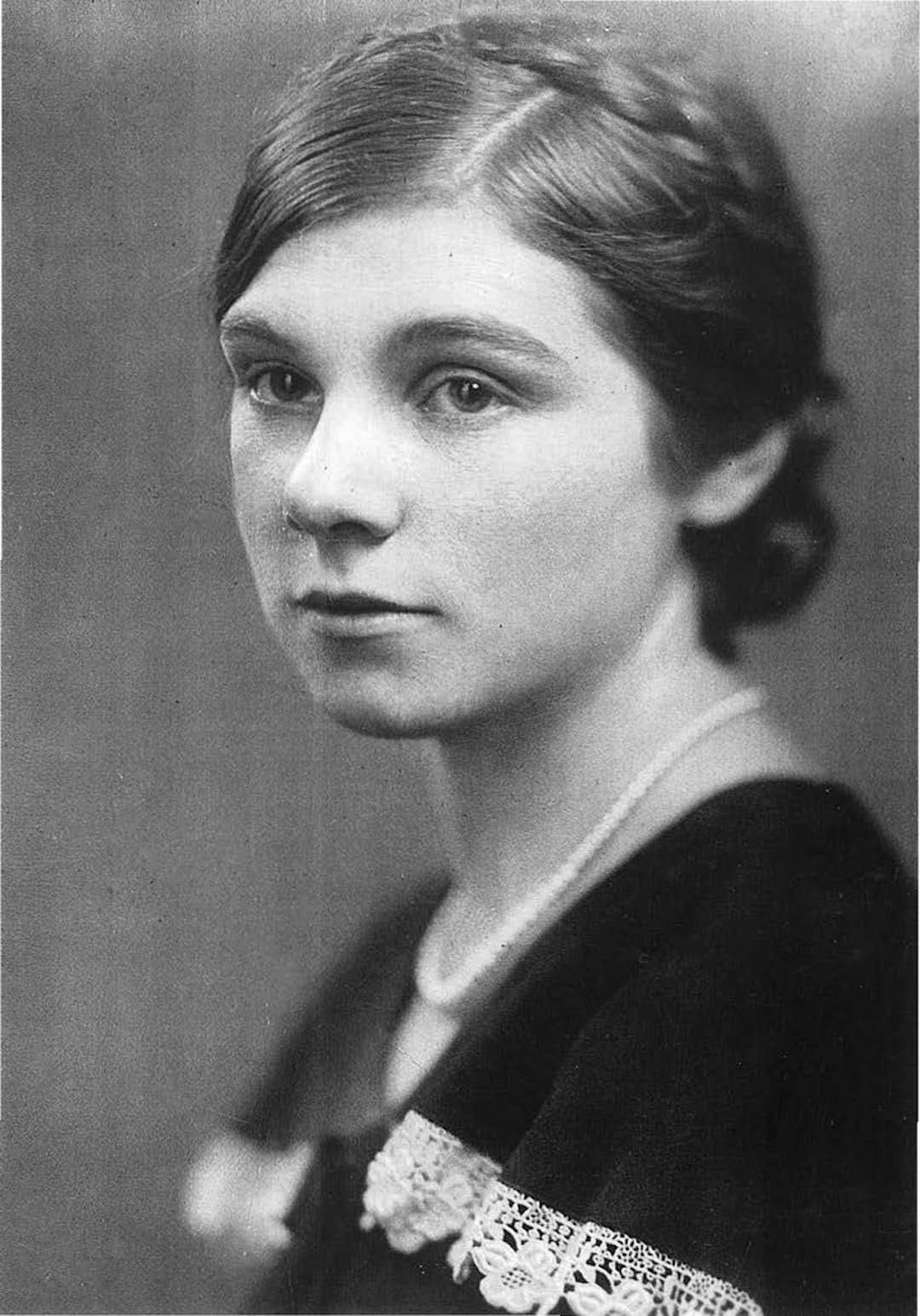 Sydney Taylor, born Sarah Brenner, in the 1920s. (From the private collection of Jo Taylor Marshall)

Sarah, their third daughter, was born in 1904 when the family was living in a fourth-floor walk-up at 708 East 5th Street, just off Avenue C. That tenement building’s footprint is now part of a community garden, El Jardin Del Paraiso. During Sarah’s childhood, the street was jam-packed with multi-generation immigrant families. Hardly anyone’s idea of Paraiso, paradise.

While the stories in the series are somewhat autobiographical, as Cummins points out, they are selective in their representation, leaving out much of the hardship, poverty and trials the family experienced.

The Brenner sisters got their famous nickname in elementary school, when the principal would single them out — all dressed alike, in clean, starched, hand-made dresses with white-embroidered pinafores and matching ribbons in their hair — to meet visiting dignitaries. A Chinese visitor said, “They’re all of a kind – an all-of-a-kind family.”

From the Lower East Side, the family moved uptown to the Bronx, where Sarah attended Morris High School, the city’s first “mixed high school, where boys and girls attended classes together.” At 14, she changed her name from Sarah to Sydney – as Cummins explains, she “wanted to be different and make a mark.”

Taylor had to leave high school before graduating in order to work and help support the family, but was intellectually engaged from her teens onward, reading, attending lectures (Rabbi Stephen Wise at Carnegie Hall on “The Eternal Question”) and building an “independent life of artistic sensibility.”

Working at jobs in the garment industry and elsewhere, she avidly wrote letters to her friends and to the young men interested in her. When she joined the Young People’s Socialist League, she was interested in both politics and the group’s social life of dances and hikes. At a YPSL meeting, she met the man who would become her husband, Ralph Taylor.

Ralph was interested in music and dance, and started a serious dance magazine. Sarah acted with the Lenox Hill Players, whose producing director for a time was Lee Strasberg. When she shifted her attention to dance and movement, she joined the Neighborhood Playhouse where Martha Graham, then a rising star, was teaching. She joined Graham’s modern dance group and traveled with them. Ralph took over the Caswell-Massey pharmacy where he had first worked as an errand boy and pursued arts alongside the thriving business.

After seven years of marriage, the Taylors had a child in 1935, Joanne, known as Jo. Taylor would tell her daughter stories of her own childhood, and wrote them down. Nevertheless, as Jo grew up their relationship was strained.

Taylor joined her sister Ella on the staff of Camp Cejwin, a summer camp grounded in Jewish culture and education, and as “Aunt Syd” went on to spend about 40 summers directing the camp’s dance and drama program and writing original plays for the campers. All the Brenner sisters worked there at some point.

During the summer of 1950, while Taylor was at Cejwin, Ralph saw a notice about a writing contest and submitted some of his wife’s stories about her family. She won, and that changed her career, their lives and perhaps the lives of millions of children. The Chicago publishing house Wilcox & Follett gave her a prize of $3,000 in 1951 and a contract to publish the stories as a book. Cummins details Taylor’s relationship with editor Esther Meeks, who continuously tried to steer Taylor away from making the stories too Jewish, or to adhere to Meeks’s own views of religion (Meeks wasn’t Jewish and couldn’t understand that the holiday of Sukkot could be lively and so much fun).

With the success of the book and then the series, Taylor would travel to speak to librarians and students. She received much fan mail and answered every letter. While the books were major bestsellers and considered pathbreaking, the path to further publishing wasn’t always smooth, as her editors moved on and their successors had strong opinions as to what would sell.

Throughout her life, Taylor remained close to her sisters (who lent their real names to the girls in the books), who were also creative, and their married lives were intertwined. They and their two younger brothers all remained committed to their parents, who eventually moved to Florida. The Taylors were also close to Ralph’s family, and his parents worked in the Caswell-Massey store.

This accomplished biography combines interpretation of the stories with Taylor’s experiences and attitudes about marriage, women’s careers, politics and the arts. She was a hard-working perfectionist, resilient like her mother. All of the sisters were independent and several were modern like Taylor, yet all took care of their husbands and homes according to Cilly’s high standards and the expectations of their era.

After Taylor’s death in 1978, Ralph helped to name an award in Jewish children’s literature in her honor. Today the Sydney Taylor Book Awards, under the auspices of the Association of Jewish Libraries, are awarded annually to “outstanding books that authentically portray the Jewish experience.”

While the books were major bestsellers and considered pathbreaking, the path to further publishing wasn’t always smooth.

The awards have been expanded to several categories and among this year’s winners –awarded last week –are Lesléa Newman and Susan Gal, author and illustrator of “Welcoming Elijah,” a picture book set at Passover, and M. Evan Wolkenstein for “Turtle Boy,” a middle-grades novel about a bullied bar mitzvah boy. Jo Taylor Marshall continues to support the awards in her mother’s memory.

In a conversation with The Jewish Week, Marshall said that Cummins was the first and so far only biographer to approach her about her mother. She has been in talks over the years about a film version of “All-of-a-Kind,” and still hopes that will happen.

Marshall recalled that her mother first came up with the “All-of-a-Kind” stories to teach her more about her family’s background, as Marshall had only scant Jewish education. She remains grateful that her mother gave her a love of theater, dance, music, poetry and good writing. Now Marshall answers the fan letters.

The Museum at Eldridge Street presents “From Sarah to Sydney: The Story Behind Sydney Taylor’s Biography,” featuring Alexandra Dunietz, on Thursday, July 8, 2021 at 6 pm, via Zoom. Suggested donation, $12.