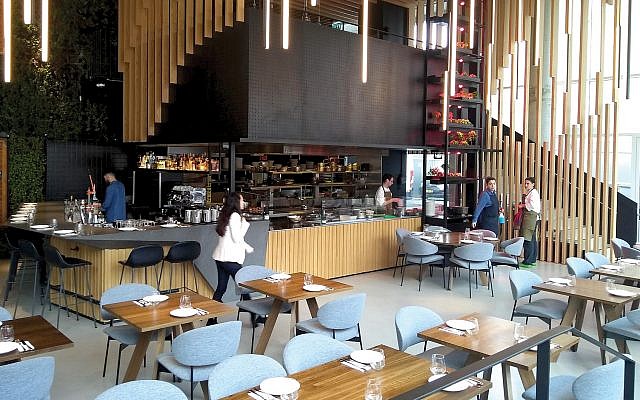 Located in the heart of Tel Aviv’s historic district — the home to Israel’s financial and start-up scene — the L28 restaurant equips young chefs with skills to manage their own kitchens while giving them a stage for the local dining industry. Joshua Mitnick/JW

Tel Aviv — From Silicon Valley to New York City to Israel’s tech ecosystem, accelerators have become a popular way for fledgling companies and entrepreneurs to develop start-up ideas into businesses.

Now, Start-Up Nation Central, a nonprofit that promotes Israeli tech abroad, has opened something of an accelerator for ambitious cooks: L28, a restaurant that offers up-and-coming chefs a six-month residency to hone their menus and culinary concepts for Israeli diners and restaurateurs.

Located in the heart of Tel Aviv’s historic district —  the home to Israel’s financial and start-up scene — the restaurant equips young chefs with skills to manage their own kitchens while giving them a stage for the local dining industry.

L28, which started to host local foodies at the end of 2018, opened its doors at time when Israeli dishes and chefs have generated a considerable buzz internationally. Tel Aviv’s restaurant scene, meanwhile, has become a draw for culinary tourists from abroad.

“The main aspect is to give an opportunity for young chefs that have never been at the front of the restaurant,” said Moran Agasi, L28’s on-site manager. “They could be extremely talented sous chefs or extremely good cooks. But their name was never front and center.” 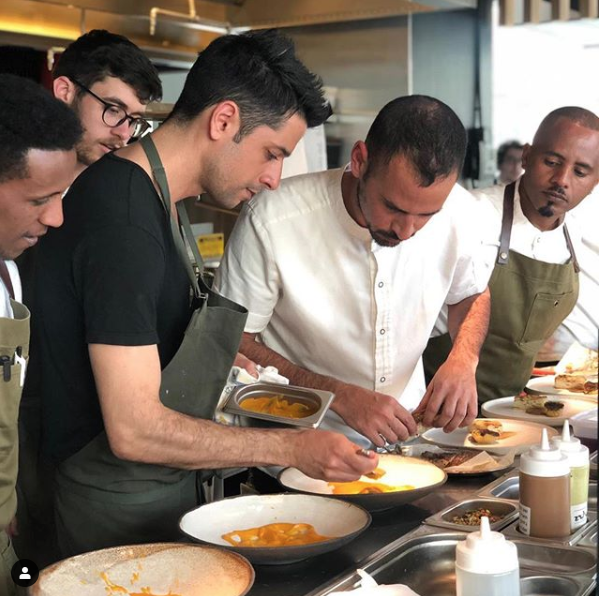 Nir Mesika (of Timnah NYC fame) is a guest chef at the Tel Aviv culinary pop-up until May 5, 2019. Instagram/l28culinary.platform

Beyond giving a boost to young culinary luminaries, the vision behind the pop-up concept restaurant is to cultivate a culinary dialogue that will further crystallize the essence of Israel’s food scene: namely, what is this thing called Israeli cuisine?

It’s a question that can veer into philosophical and delicate political minefields. Ever hear of the hummus wars?

“There are people who say there is no Israeli cuisine, it’s just a mashup of Arab and Mediterranean cuisines,’’ said Gabriel Israel, 27, a chef who is preparing to kick off L28’s second residency on May 12. “Israel wants a cuisine, just like every other country. It has to be defined. The next step is to get it accepted all over the world.”

Israel, raised in the Jewish state with parents who have roots in Algeria and Morocco, studied at the Culinary Institute of America in Hyde Park, N.Y. At 25, he served up his take on modern Israeli food at the Green Fig in Hell’s Kitchen.

While living in New York, he also opened a food truck in the Diamond District for shakshuka, the poached eggs and spicy tomato sauce dish brought to Israel by North African immigrants.

“I wrote on my menu, ‘Israeli dish.’ That’s how I got into a debate with several Egyptians. They came and said, ‘Shakshuka is not Israeli,’” he said.

“At the end of the day, what I found out is that shakshuka doesn’t belong to anybody, because every place in the world has figured out how to poach eggs in a sauce.” At the same time, almost all Israeli restaurants offer some kind of shakshuka, he said. 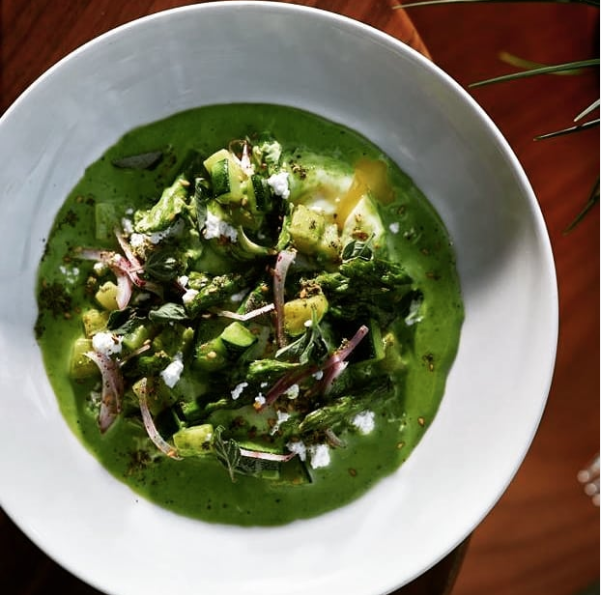 Chef Gabriel Israel reinvents the traditional shakshuka dish, this one with a green twist. An ode to his French roots, this one includes asparagus, zucchini, pickled onions, goats cheese, fresh oregano, and zaatar. Instagram/l28culinary.platform

Perhaps appropriately, the jargon of the tech start-up world has seeped into the lexicon of L28’s managers. They describe the restaurant as a “platform” for chef “creators” to give them a “toolbox” to manage a kitchen and connect them with the local dining “ecosystem.” And much like Israel would love to lure back its academics and tech executives who have succeeded abroad, one of L28’s goals is to link Israeli chefs living abroad to local entrepreneurs.

Managers say the restaurant aims to make meals at prices that are accessible to the general public.

The first residency featured chef Shuli Vilmer, who cooked at London’s iconic The River Café, and ended last month. Vilmer, a native of northern Israel who mixes influences from the Levant with Italian cuisine, got a positive reception from Israeli restaurant critics. She began creating dishes over the last two years. At L28, she fused the Italian gnudi, a gnocchi-like dumpling with cheese, with a local ingredient, Labane cheese and lemon juice.

“I never knew if I’m going to have my own language of food. I started to have ideas and the itch to create, to take things I learned from other chefs. Then I got this opportunity,” said Vilmer.

“Having a chef residency for six months means having my own restaurant without having to stress over or deal with all the other stuff around it. Now I can do whatever I want.”

Restaurant managers acknowledge that L28 is still very much a work in progress. “We’re open to failure because it is a start-up and you can’t grow without failing,” said Agasi.

Indeed, the venture has already hit one snag. An unnamed Jerusalem chef that L28 has been plugging as recently as last month as the second resident chef needed more time to get her menu perfected. Gabriel Israel stepped in to pinch hit.

Israel says he is planning light summer dishes with a heavy dosage of Mediterranean spices like sumac.