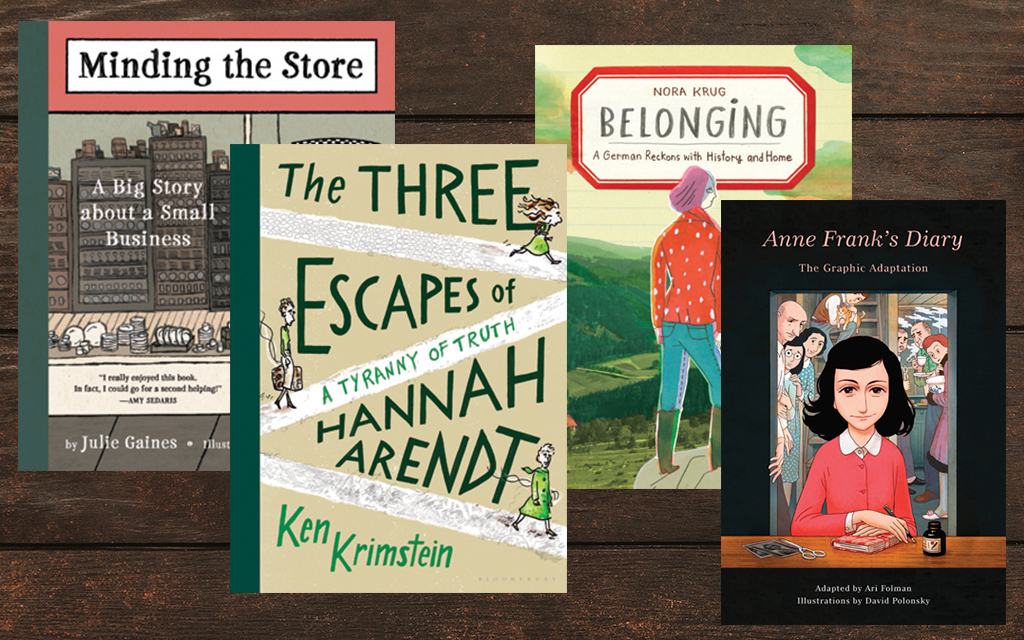 For an adult reader, a graphic novel can be a comfort and a challenge. This season’s newest titles certainly elicit both reactions, delving into memory and history, sometimes fusing the two, with marks of creativity and originality extending beyond the frames and panels.

It’s hard to imagine a better way to tell the story of a husband and wife who see possibility in dishes and bowls stored away for years in Bowery basements than a graphic memoir, with drawings that perfectly capture their spirit and humor.

“Minding the Store: A Big Story about a Small Business” (Algonquin) details the life of the New York housewares shop Fishs Eddy. Julie Gaines, the author, founded the store with her husband Dave Lenovitz on a Gramercy Park street, before expanding to other parts of town. Their son Ben Lenovitz contributes the illustrations.

Fishs Eddy sells dishes, glassware, bowls and other items that you might not find elsewhere, some that were vintage oversupply from hotels and restaurants and others manufactured for the store with the work of New York designers. 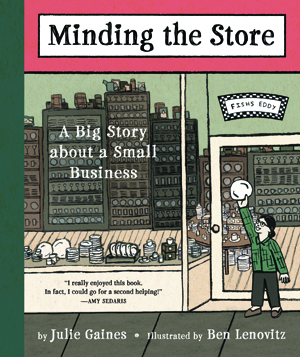 In the book, as in life, Gaines and Lenovitz started out by renting a shop and filling it with items from Pennsylvania flea markets and her mother’s garage. On the Bowery, they discover troves of dishware of another era, from Howard Johnson’s and Bernstein’s Fish Grotto, and they haul it back to their store. “Dave and I were unearthing a slice of American history,” Gaines writes.

For a while their two mothers manned the shop — captured with hilarity by their grandson — one reading magazines and the other snapping at customers (“I didn’t ask you to come in here, did I?” appears in a bubble above Dave’s mother’s head, as she is facing a customer). From this experience, the entrepreneurs learn that, “Our dishes wou ld sell themselves.”

Ben Lenovitz draws in panels and on full-pages, including clever illlustrations to open chapters with titles like “Doing Dishes,” “Bully in a China Shop” and “Dishing It Out.” 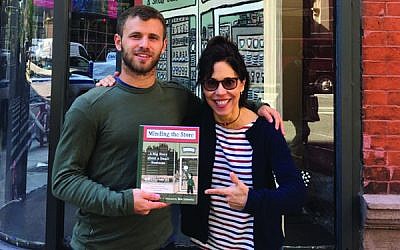 The book, drawn and colored in shades of brown and green, chronicles the ups and downs of the business — as they expand, hire professionals, fire them, hire others, trying to keep doing what they love — and eventually the ups again. Along the way, they find luck, make mistakes, achieve success, build a family, face personal losses and keep going — keeping the plates in the air.

Another graphic memoir, “Passing for Human” by Liana Finck, offers a deep view into the mind and soul of the author/illustrator. Finck, whose work frequently appears in The New Yorker, tries to make sense of her lifelong sense of being different, and how that sparks her present life as an artist. 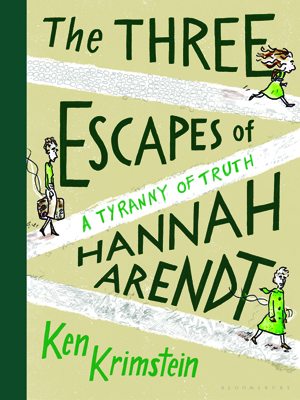 While she refers to her school as a suburban parochial school, it’s clear that she attended Jewish day school. She maps out “The Elementary School Hierarchy,” with names of girls like Ilana and Aviva, who wished they were cool, and the author alone at the bottom of the facing page, looking away.

Her black-and-white illustrations are powerful, yet done with a light hand, mostly across grids. She begins with her mother’s story of encounters with her shadow, and also tells of her father and their shared legacy. The author, who calls herself Leola here, deals with her own shadow too, in darkness and light. The story is layered with melancholy and solace, humor too, and openings to freedom, creativity and love.

“The Joe Schuster Story: The Artist Behind Superman” by Julian Voloj and Thomas Campi (Super Genius) is a story of imagination, drive and the dream realized of two Jewish kids from Cleveland. Voloj writes in the first-person as Schuster, who posed his friend and co-creator Jerry Siegel to draw Clark Kent. It’s clear that the creative team of Voloj and Campi loves its subject.

Campi’s images are beautiful watercolor paintings, capturing cityscapes and dreamscapes, a great match to Voloj’s text, printed in a typeface that looks like neat handwriting. The back story of their man from the future who travels to the present and fights crime is one of loyalty and friendship, deal-making, disappointment, law suits, settlement and the occasional triumph of “truth, justice and the American way.” 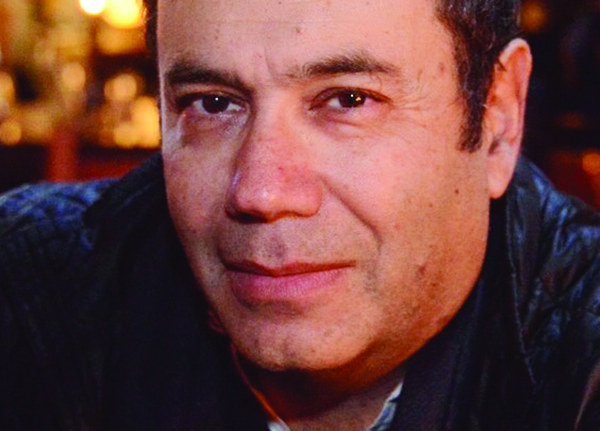 “The Three Escapes of Hannah Arendt: A Tyranny of Truth” by Ken Krimstein (Bloomsbury) is a graphic biography told in the voice of the philosopher, from her childhood to her final days. Early on, there’s young Hannah being taunted in the street in Konigsburg by a schoolmate, “You are a Jew Jew Jew Jew Jew Jew.” Her pigtails askew, she says, “But I’m Hannah.” 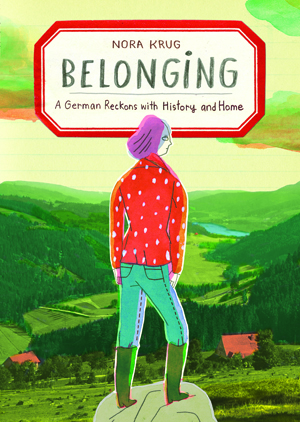 Her father suffers a terrible death, and he literally fades out of the frame. To answer questions like “why there’s things like Poppa dying,” the young girl takes up reading Kant. By the time she’s 14 she has read all of his books, and still doesn’t have the answers. She is seen in a tall narrow frame, seated on a towering pile of books. Then she moves on to ancient Greek.

Arendt’s three escapes are from the Nazis in Berlin, the Nazis in Paris and then, in New York, from her former professor, Martin Heidegger. Krimstein tells Arendt’s story with eloquence in his text and illustrations, as she continues her quest for truth and understanding, through difficult times.

Arendt is usually seen cigarette-in-hand in Krimstein’s two-color expressive drawings. When she debates with herself, arrows go back-and-forth between two adjacent frames. Toward the end, Krimstein dedicates a page to a beautiful drawing of Arendt walking atop the globe, surrounded by the stars, th inking, “To be alive and to think are the same thing.” 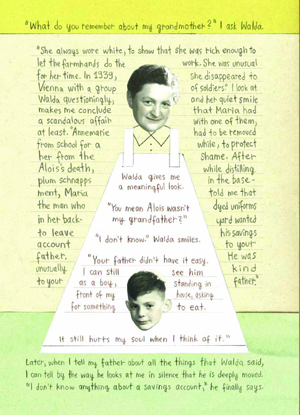 Honoring the spirit of Anne Frank, “Anne Frank’s Diary: The Graphic Adaptation,” adapted by Ari Folman, illustrations by David Polonsky (Pantheon), is printed in full color and beautifully presented. This first-ever graphic edition of “The Diary” was authorized by the Basel, Switzerland-based Anne Frank Foundation, whose stated goal is to have the diary reach as wide an audience as possible.

Featured are selections from the original text, emphasizing the most introspective sections. Folman’s Anne has large knowing brown eyes and a mane of dark hair that flips up at the ends.

This graphic novel looks more formal than some of the other books, with straight lines framing the text, and a more realistic drawing style, which resembles animation. In fact, Folman, who directed the Oscar-nominated Israeli animated film “Waltz With Bashir,” was invited by the foundation to work on an animated film to be called “Where is Anne Frank?” Polonsky was the art director for “Waltz with Bashir.” 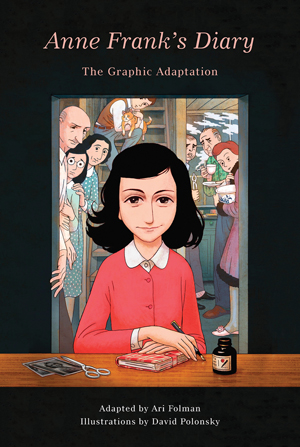 They include a page detailing what each of the people hidden in the attic would most like to do if they could get outside again: for Margo it is two days in the bath, and she’s seen covered with bubbles and eating pudding, reading and being serenaded by a violin; her mother was dying for a cup of real coffee and she is seen at a café table. Peter would have wanted to go out on the town, which appears in pinks and reds, and Anne would like to go back to school — she is seen in her class, as in the beginning. The drawings are based in historical research.

Nora Krug’s “Belonging: A German Reckons with History and Home” (Scribner) is a visual memoir in muted colors. While some pages feature comic book-style grids, the book is mostly an illustrated archive of her life, evocatively crafted. Krug grew up in Germany decades after World War II, but the war and the Holocaust were ever-present in her life. 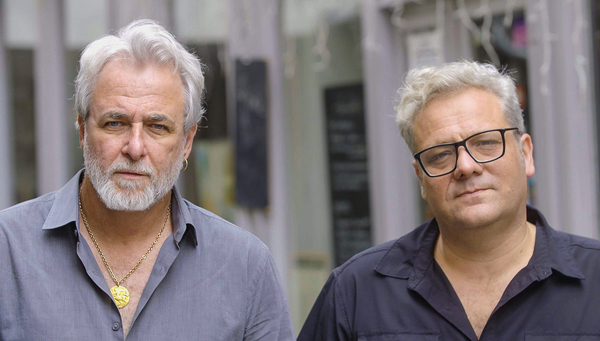 All four of her grandparents lived through the war, but never spoke about it. After living in America, she returned Germany to research her family’s activities during the war. She ponders the meaning of Heimat, which means the place that first forms us.