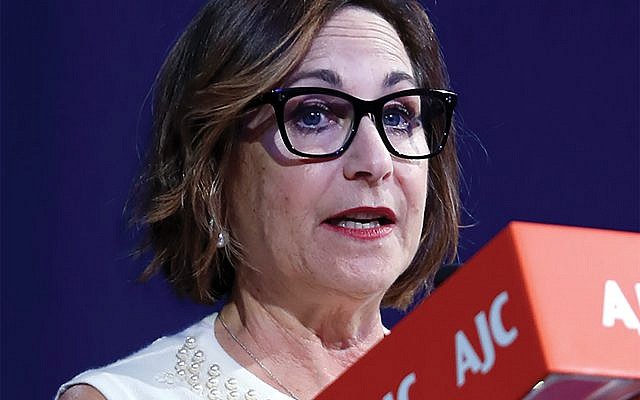 Schleifer: Working to “make sure Israel does not become a partisan issue.” Courtesy of AJC

Harriet Schleifer of Chappaqua, N.Y., has been elected the first woman president of the American Jewish Committee in its 113-year history. A former president of Bet Torah synagogue, a Conservative congregation in Mt. Kisco, Schleifer is the daughter of Holocaust survivors from Poland. She joined the AJC 15 years ago and later endowed the directorship position of the AJC’s Central Europe office in Warsaw. She served as chair of its board of governors from 2016 to 2019. Married and the mother of two adult children, she formerly practiced law with a focus on education. The Jewish Week caught up with her recently after the AJC announced the appointment.

Q: What does it mean to you to be the first woman president of the AJC since its founding in 1906?

A: I’m greatly honored. I think it’s an amazing privilege. I am very happy to perhaps have started a new tradition.

What took so long for the AJC to have a woman president?

People say that to me, but the most important thing is that we have a wider vision of who might be the next president. It is the personal characteristics and the success the president brings to the organization that is most important.

What will you bring to the position that has been lacking in the past?

I think everyone brings their own unique talents to the position. I am very, very interested in creating a feeling of family and connectiveness, and to make everyone involved in the organization feel they are part of a larger family or community.

What are some of your other objectives?

From a mission point of view, I would like to combat anti-Semitism that we have been warning Europe about for 17 years. We started doing that in France and now it has become a very difficult situation.

Do you really believe it has become accepted?

It is becoming more commonplace, and people are not taking enough of a stance against it. In Seattle, for instance, a Jewish person, Ari Hoffman, is running for the city council and there have been anti-Semitic remarks and postings directed at him. It is not acceptable. We need a strong reaction from the police department and from elected officials to stop it in its tracks. We cannot have this become tolerated. And other Jewish people have to stand up and demand it without being overly sensitive or hysterical.

Are there other issues you would like to advance?

Another is making sure that Israel does not become a partisan issue. We have in the past enjoyed bipartisan support in D.C., and of late we have seemingly divided along party lines — which does not serve either the U.S. or Israel well. This is a question of supporting an ally in a democratic country. We as a nation must come back and realize who are our real allies and not allow this to become a Democrat or Republican division.

Further, we are a bridge-building organization, the oldest human relations organization in the country. And part of our work is to educate and work with other religious and racial friends from different backgrounds; we need to find commonalities. We have done an excellent job with our Muslim-Jewish Advisory Council that has been a very successful model for Muslims and Jews to come together and focus on issues we can focus on, such as fighting bigotry and protecting houses of worship.

We would like to continue that kind of bridge building with our friends in the black community. We have made donations to some of the black churches that had been attacked by arsonists. We want to show support to a group of people we had enjoyed close relations with during the civil rights period, and we want to pick up on that and take it to the next level.

What about relationships with Israelis?

I would like to educate Israelis about American Jewish sensibilities and educate American Jews about Israeli sensibilities. We might be family, but we don’t really know each other as well as I think we should. I think that has implications not only for Americans in later generations, but security implications for Israel. If Americans lose their bonds for Israel, then the United States may not be as supportive in the future, and I would like to have U.S.-Israeli relations remain close.