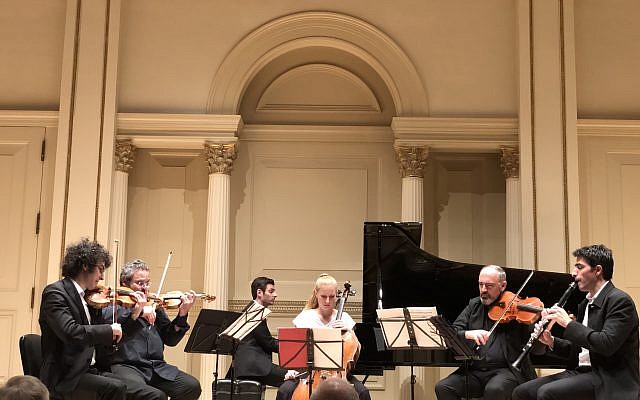 As a Jewish Day School and music student, I was drawn to a concert at Carnegie Hall by an ensemble called the Israeli Chamber Project. Intrigued by this ensemble that was both musical, and composed of Israeli artists, this was a performance I could not pass up.

Taking my seat at the Weill Recital Hall at Carnegie Hall, I saw before me a tasteful stage, set with five black chairs, music stands and a piano towards the back. As the lights dimmed and the audience began to quiet down, the Israeli Chamber Project emerged with their instruments, and filled the hall with their sounds. They would be playing chamber music, pieces intended to be performed by a relatively small group of musicians. At this particular performance, four out of the eleven members of the Israeli Chamber Project were present, consisting of cellist Michal Korman, pianist Assaff Weisman, clarinetist Tibi Cziger and violinist, Itamar Zorman. These musicians became friends at the Juilliard School of Music. The Israeli Chamber Project was born from among the many Israeli students enrolled in the Juilliard School.

The musicians of this project perform at various concert halls around the world, including Merkin Concert Hall in New York City, Wigmore Hall in London and Bourgie Hall in Montreal. Additionally, the project’s musical group is often accompanied by guest artists, who are not official members of the chamber group. The night I attended, violist Mark Holloway and violinist Yehonatan Berick joined the ensemble.

What I really enjoyed about the Israeli Chamber Project was their scope of musical selections from the classical to the more contemporary. This particular performance featured pieces from traditional composers, such as Aaron Copland, mixed with up-and-coming Israeli composers. The ensemble supports Israeli composers by commissioning them to create works specifically created for the Israeli Chamber Project. “I love classical music, and the fact that the composers are Jewish and not very well known makes the experience even more exciting,” said audience member Bezalel Kosofsky.

Another aspect that enhanced the musical experience was the relatively small size of Weill Recital Hall, in comparison to the grandiose of much larger, and sometimes overwhelming, concert halls. The smaller room complemented the chamber group, and the “intimate setting,” said audience member Devorah Goodman, “contributed to the overall energy of the performance.” This setting allowed me to appreciate the attraction to the live music for which the music was designed. Sitting in the concert hall, I heard the raw sound of a bow producing sound against string, that is simply lost through an audio recording, or video. I witnessed the movements of each musician, their emotions and facial expressions that are conveyed as they play different parts of a piece. I realized that even though each artist is creating their own sound, with their own personal instrument, the chamber group works as one unit. I became aware of them glancing at one another, thus communicating without speaking and becoming one with the piece. Their sounds melt together, into a single voice. I could hear their breathing and see the sweat dripping from foreheads.

However, not all of the experience is due to the happenings on the stage. Sitting within an audience also contributes to the experience of a live music concert. I witnessed that each listener in the audience was actually a participant absorbing the music in their own personal way. Some had their eyes closed, others were tapping their hands against their knees to the pulse of the music and still others were simply facing forward, focusing on the artists as they played. Music is something to be experienced and engaged with, when the senses of sight, movement and listening all contribute.

The Israeli Chamber Project was started about eleven years ago and has since developed a loyal fan base. Marjorie Miller attends the Israeli Chamber Project concerts each time they return to New York. Miller is a former neighbor of one of the founding members of the group, Assaff Weisman. They soon became friends, as she would often hear him practicing the piano down the hall. Janie and Joe Roher attended the concert for similar reasons, as they currently live in the same building as Assaff Weisman. Weisman was Janie’s piano teacher, and she has since become a big fan of the group because “they introduce new music to the audience.” Walter Brown, another fan and relative of two of the musicians, has been following the ensemble since the musicians finished school. Matt Wright, a pianist himself, took his first trip to Israel with family last year, and attended the concert because of the performers’ Jewish roots. Devorah Goodman and her husband live in Tel Aviv for part of the year and heard the chamber group play in Israel. Goodman and her husband are “big supporters of Israeli everything” and love that the music the chamber group plays is very varied and eclectic. She also enjoys that prior to playing certain pieces, some of the musicians will preface the piece by talking directly to the audience, a practice that is more common in Israel.

Aside from being world-renowned musicians, the Israeli Chamber Project fosters musical education, and has partnered with numerous institutions to offer music lessons and masterclasses, to students coming from under-privileged economic backgrounds, who otherwise, would never have the opportunity to learn from international artists.

Award winning clarinetist and founder of the Israeli Chamber Project, Tibi Cziger, thinks that “when we [the Israeli Chamber Project] play our music internationally, we are only thinking about the music, but just us being Israeli and playing Israeli music, we are acting as ambassadors for Israeli culture. As musicians, playing music that is written by Israeli, as well as non-Israeli composers, we feel like cultural ambassadors. When we are abroad, we try to show what Israel is about culturally.” Guest musician Yehonatan Berick, an award-winning musician who travels the world as a soloist, mentor and chamber musician, sees the group as an inclusive musical ensemble, incorporating non-Israeli’s into their performances as well. Yet at the same time, “there is something about the pride of coming from Israel, which is such a small country, yet with such a hotbed of talent.” Berick does not see the group as an over-nationalistic, musical propaganda for Israel, yet “the Israeli Chamber Project is proud of its roots and background. We want to bring music with that angle.”

For most music lovers, this evening of chamber music was an absolute delight. Another bonus was that the entire audience was invited to their “after party,” a small get together to meet and speak with the performers, which to me, struck the perfect chord.

Samantha Sinensky is a sophomore at The Ramaz School in Manhattan.