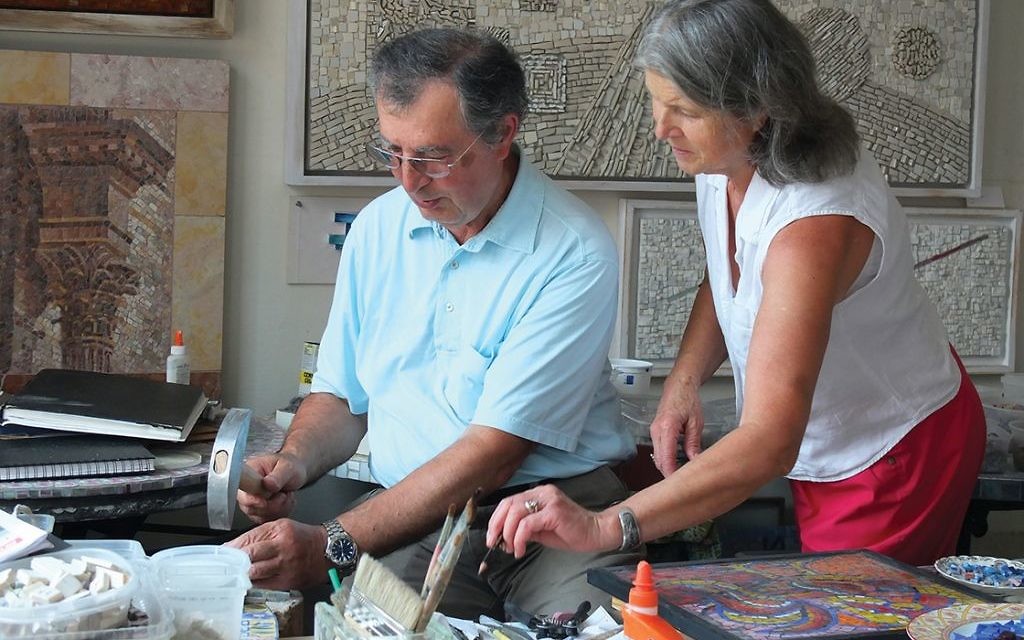 On a busy stretch of West 57th Street, where stately old buildings are being replaced by new skyscrapers that will be among the city’s tallest residential buildings, a spectacular mosaic mural has just been unveiled in the lobby of a 16-story building that’s been standing since 1927.

The mosaic artist is a Jewish immigrant from the former Soviet Union, who was born in Uzbekistan and studied art and design in Kaunas, Lithuania, and Moscow. The patron is the granddaughter of a Hungarian Jewish immigrant, who wisely bought Manhattan real estate in the 1940s and left the buildings to his family. The mural “Golden New York,” is a shimmering view of some of New York’s iconic structures, each in different perspective.

Made of small roughly rectangular pieces of stone as well as 24-karat gold glass tiles, the 5.5-by-5.5-foot panel depicts the Chrysler Building, Brooklyn Bridge, Freedom Tower, Carnegie Hall, Grand Central Station and other iconic structures in exuberant style, in a spectrum of deep blues, greens, browns, red and gold. The view is abstract, as though from the street looking up, with pockets of sky. The buildings appear radiant, as they do when sunlight bathes them at certain hours.

The mosaic is both art and, for the owners of the building at 119 W. 57th, a statement that despite repeated offers from developers to sell, “we’re not going anywhere,” explains managing partner Alice Sparberg Alexiou. An author, Alexiou owns the building along with several partners, also the descendents of former owners.

Like Alexiou’s grandfather Abraham Braun, who arrived in New York in 1914, mosaic artist Yakov Hanansen loves this city. He and his wife Angele, who is also an artist and who works with him on many projects, run Unicorn Art Studios on West 28th Street, a workspace and gallery where they give classes and do their own work, which includes many large-scale commissions. Alexiou met the Hanansens a few years ago, when she took a class.

“New York inspires me every day,” Hanansen says. “I draw energy from it.” He worked on this piece for nine months, beginning by breaking up imported tiles — the blues from Brazil, others from Turkey, and the gold from Italy. He uses color like a painter, creating details and shading by carefully placing the tessarai, as the stones are known.

The Hanansens met as students at the College of Applied Arts in Kaunas, and then both did graduate studies at an art institute in Moscow. As a child, Yakov loved color and drawing and was first drawn to mosaics when visiting Moscow train stations; he also saw them on Islamic buildings in his native city of Andizhan, near Tashkent. His father fought in World War II and was paralyzed, and Yakov was raised by his mother, a photographer and teacher. His grandfather Katan disappeared in 1943, and the family later learned he was killed in Stalingrad.

The Hanansen’s two children were born while they were living in Moscow; the daughter is now a mosaic artist and the son, named for Katan, is an architect. The family moved from Moscow back to Andizhan. In 1975, Yakov got his first commission, a large mosaic on the exterior of the telephone company building in Andizhan, and in the following years did many exterior mosaics on public buildings. Later he created a sculptural mural for the home of the president of Uzbekistan.

In a 1990 pogrom in Andizhan, Jewish homes were burned. The Hanansens’ home wasn’t touched, as the local Muslim people liked Yakov’s work, but he and Angele understood that they had to leave. Previously, when they tried to leave, they were unable to get out. Angele notes that Jews had been in their city for centuries and now there are none.

They left their distinguished reputations as artists behind, and arrived in New York in April 1991. As they needed to find work immediately, they took on some home furnishing design projects. In 1995, they started Unicorn Art Studio, at first doing textiles, and slowly Yakov began doing mosaics again.

Among his commissions are “Moving Water” an exterior mosaic at the entrance to the Hospital for Special Surgery in New York; “History Preserved” in Penn Station, a series of natural stone mosaics depicting the earlier rail station (at the entrance on Seventh Avenue at 31st Street), “Peace to Israel,” a mosaic of Jerusalem on the façade of the Bukharan Jewish Community Center in Forest Hills; large mosaic murals in lobbies around Manhattan (529 Fifth, 575 Madison, 1430 Broadway and others), and other projects around the U.S.

The artist also created a mosaic gravestone for his mother, who was born in Uzbekistan in 1922 and buried on Long Island in 2004. He covered the stone with images of the colorful flowers in her beloved garden in Andizhan.