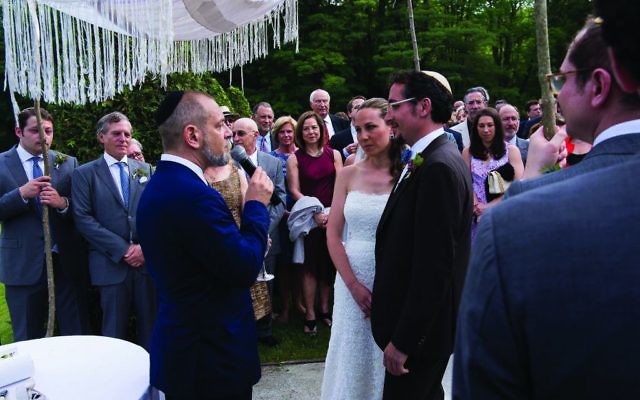 Rabbi Lau-Lavie officiating at the wedding of Ben and Elana. Courtesy of Christopher Duggan

In the last several weeks we have reported, and featured opinion articles, on the impact increased intermarriage is having on our community. More specifically, the focus has been on Conservative rabbis seeking to balance their commitment to halacha (Jewish law), which prohibits intermarriage, with compassion toward congregants seeking their official participation in marriages to a partner from another faith.

Two well-known local rabbis have announced they are prepared to give up their membership in the Rabbinical Assembly, the rabbinic arm of the Conservative movement, which does not allow members to officiate at interfaith marriages. Both Rabbi Rolando Matalon of Congregation B’nai Jeshurun on the Upper West Side and Rabbi Amichai Lau-Lavie of the downtown Lab/Shul said the decision was painful, but that, as Rabbi Matalon told us, “If we don’t bring them in, we lose them. And we are not prepared to lose them and the Jewish future.”

“If we don’t bring them in, we lose them. And we are not prepared to lose them and the Jewish future.”

These are hard choices, and those on both sides of the debate have acted with respect, empathy and dignity in responding to those with whom they disagree, an all-too-rare example of civility these days, especially on such an emotionally charged issue.

One premise of the discussion has been that the growing rate of intermarriage in the U.S. is irreversible, and that trying to counter it outside of the Orthodox community is like trying to fight gravity. But why is it a given that Orthodox rates of intermarriage are so low? Surely there are a number of factors, but key is the unwavering commitment to halacha, transmitted within the family and bolstered by the immersion of Orthodox youth in day schools, camps and a range of educational and social activities that reinforce the message of living a life of mitzvot.

A new study published by the Jewish People Policy Institute (JPPI), a Jerusalem-based think tank, calls for direct action to strengthen Jewish life in the U.S., arguing that otherwise the future is one of a shrinking and increasingly disengaged Jewish population. The premise of sociologists Steven M. Cohen and Sylvia Barack Fishman, authors of the report, is that the community must foster an environment where Jews are more likely to marry Jews. The two elements of communal “intervention” called for are “supporting a range of Jewish educational endeavors” and “promoting Jewish social networks for adolescents and single young adults,” they wrote.

The bottom line: “Jews who know Jews tend both to marry Jews and to be recruited for further Jewish engagement,” the study says, noting that “extending the years of formal education through the high school years is critically important.”

Truth be told, these and other recommendations calling for earlier marriage, more children and more ways for young Jews to meet and socialize with other Jews are not new. Some critics have dismissed such proposals as not only unrealistic but offensive to those who intermarry. The proponents of in-marriage, though, assert that while they welcome outreach and conversion efforts, the statistics indicate that if the present demographic trends continue, Jewish life and peoplehood as we know it may well disappear in the coming decades.

The choice is ours.