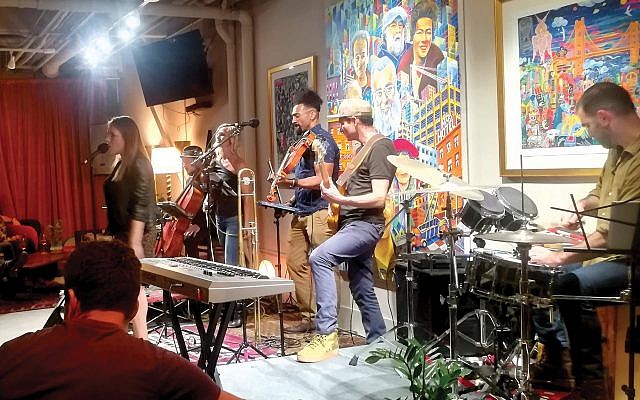 Editor’s Note: This is the first of three articles on California.

On our most recent trip to San Francisco, my daughter Zelda had two goals — to see the Golden Gate and Bay Bridges, whose suspension cables had captured her 5-year-old’s imagination.

I had another errand. I wanted to check out Manny’s, the café and “civic social gathering space,” as it calls itself, that has been the site of weekly anti-Zionism protests since its opening last fall in the fast-gentrifying Mission District. Manny Yekutiel, the owner, is Jewish — and all it took was an expression of support for Israel, the country that welcomed his father and grandparents as refugees from Afghanistan, to spark an anti-Manny’s campaign.

It felt so quintessentially San Francisco: that the Jewish buzz would center not around religion, ritual or culture, but progressive activism. And naturally, this being the Bay Area, the debate wasn’t right-versus-left, but left-versus-left.

Manny’s boasts what most would consider impeccable progressive credentials. It hosts a civil rights-themed bookstore, with social justice titles in English and Spanish. Yekutiel donates his event space to a variety of community organizations; recent gatherings have featured San Francisco’s first African-African woman to serve as mayor, the executive director of the Sierra Club, and an interfaith clergy panel on racial justice.

“The flatbread is fantastic — way better than I’d expected,” one patron raved to me. He’d dropped by in solidarity a few weeks earlier, joining a regular crowd of counter-protesters eager to support both Israel and a socially conscious, arts-supporting neighborhood venue.

And it’s not just any neighborhood. The Mission is Exhibit A for San Francisco’s tech-boom gentrification controversy, in which racial, economic and social dynamics play out in real estate. $7,000-a-month rental apartments for 20-something Facebook coders are rising over the taquerías, smoke shops and check-cashing joints of this historically working-class Latino district.

Over years of people-watching along Valencia and Mission Streets, I have seen prices rise and the average age fall. Low-income and older residents struggle, often visibly, in the shadow of boutiques selling $15 fair-trade chocolate bars and $25 huevos at brunch.

But you can get coffee for $1.75 and a healthy meal for under $10 at Manny’s — pricing deliberately in line with the venue’s socially conscious mandate. You can also sip low-alcohol cocktails like the Ruth Bader Gimlet at the inviting bar area, where WiFi is plentiful during “work” hours but shuts off to encourage unplugged socializing after 6 p.m.

Between comfy couches, mural-style paintings and piles of books, Manny’s feels strangely like the old San Francisco. Zelda and I tucked into a racially diverse, capacity crowd of perhaps 80 to hear an acoustic band; she was the youngest, but I was far from the oldest, and the proportion of long, bushy beards was just shy of a Chabad convention.

As the singer wailed over trombone, cello and electrified viola riffs, passers-by on Mission Street peered in the windows, waving to acquaintances and clapping for drum solos. The cellist announced a piece about the Warren Commission; guest vocalists sang about girl power. It felt neighborhoody in the way so much of the Mission still does.

Manny himself is slim, young and charming, talking up community and welcoming everybody with relentless optimism. I wondered aloud about the viability of performing arts in a brutal market; he countered with “the best possible use of this space” — as a place where locals of all persuasions can debate issues head-on, engaging a variety of viewpoints and cultural expressions.

Variety, of course, is what makes a city fascinating. On a Saturday night in the Mission, firecrackers spark and Ubers cruise around bars packed with vaping singles, under billboards advertising cannabis delivery. On Sunday morning at the Mission Playground, Zelda played with children born in France, New York and Mexico.

Then we headed to Dolores Park, the district’s hilly green heart, with Instagram-ready views of downtown and the bay. On a sunny afternoon, hundreds of sunbathers turn Dolores into San Francisco’s version of a beach. A state-of-the-art playground just opened — one of many new children’s spaces in parks from the Marina to North Beach. They’re evidence of a wave of young families, many Jewish, in a city not particularly known for either.

How Jewish San Francisco feels — or how Jewish Manny’s feels — is, of course, a matter of perspective. But the view from Mission Street, like the view from the Golden Gate, is as beguiling as ever.