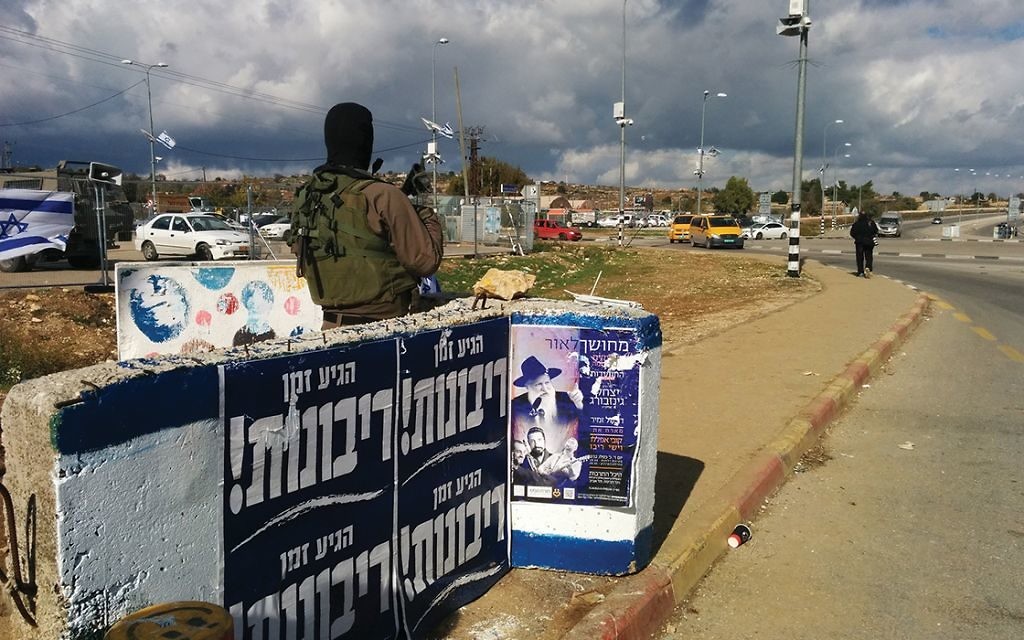 Offering discounts on everything from produce to breakfast cereals, the Rami Levy store — more boxy warehouse than fancy market — has attracted shoppers from both the Jewish settlements and the Arab town of Bethlehem. Located at a heavily traveled traffic circle in the middle of the Etzion bloc of settlements, the supermarket has overcome calls for boycotts on both sides and employs both Israelis and Palestinian working side by side.

One Palestinian customer once dubbed it, “The peace supermarket.”

But a wave of about 10 terrorist attacks targeting the intersection in the last two months — most tragically a shooting attack on Nov. 18 that killed 18-year-old American gap-year student Ezra Schwartz — has undermined the experiment in coexistence.

Employees say fewer shoppers are coming; those who do show up say they are more wary; and the Gush Etzion traffic circle is full of soldiers who finger M-16 rifles for fear that the next stabbing or car ramming could come at any time.

At the entrance to a parking lot where cars with Israeli yellow license plates park alongside Palestinian cars with white-and-green plates, a pair of Israeli soldiers wave off Palestinian motorists who aren’t employed at the supermarket. The fear is that the drivers might try to run down shoppers.

“There’s nothing we can do about it. We say to them, ‘Go back and tell your neighbors to stop the attacks,’” said one of the soldiers at the entry way. “They accept it with understanding.”

Mahmoud Siag, an east Jerusalem resident who worked in the supermarket bakery, said he understood the reason for the Israeli security crackdown. But he also expressed sympathy for work colleagues from the Hebron region who were getting into work an hour late because they’d been held up at checkpoints and roadblocks the army has deployed at the entrances to most Palestinian villages around Hebron — which has been the main hotbed of violence.

“Lots of friends with Palestinian cars aren’t allowed in this part of the parking lot,” Siag said, referring to the new restrictions. Palestinian Christians from Bethlehem, who accounted for more than 50 percent of the shoppers on Sundays, have all but disappeared. “Maybe two or three still come,” said Siag.

For all the chaos outside, many employees at the supermarket insisted that inside the grocery store, the atmosphere remained unchanged. “It’s fine. Like a peace conference,” joked a security guard. “What is outside is outside, and inside there’s no difference,” said another employee.

Vera, a Bethlehem resident who manages both Jewish and Arab checkout clerks, said the Palestinian employees of the supermarket were disturbed by the wave of attacks. “The feeling is bad. We feel sad about what is going on, because we work together and love each other,” said another store manager who wasn’t authorized to speak to the media.

Opened in 2010 by Jerusalem retailing businessman Rami Levy, the supermarket spurred criticism from religious right hard-liners for employing Palestinians and Jews. Chief rabbis from the nearby settlements of Alon Shvut and Kiryat Arba published a religious ruling against the employment of Arab men at the market — citing concerns about interfaith affairs with Jewish women.

However, Levi did not back down, saying that his supermarket would stand as a symbol of coexistence. Currently, supermarket management said the store employs equal numbers of Arab and Jewish staffers — though some employees at the store claimed a majority of the staff is Palestinian.

Palestinians who shop and work at the supermarket defy efforts to boycott Israeli business in the settlements. During Palestinian holiday seasons, Arab patronage accounts for as much as 60 percent of sales.

Speaking to The Jewish Week, supermarket owner Levy said that attacks at Gush Etzion have cut into sales, but that the drop was no different than those experienced in his store in Jerusalem.

“The point is to hurt the coexistence. It’s hurting both Arabs and Jews. But life is stronger than the events,” said Levy. “People might be a little scared on the day of the attack. People are more careful. But they aren’t abandoning the store.”

Jewish shoppers also expressed concern. One shopper from the settlement of Neve Daniel said his wife refused to come to the supermarket alone, and said the store these days feels emptied of customers. Aliza Hammer, 42, pushed a cart full of groceries, and said that she had stopped taking her children along for the trip from her home in the settlement of Nokdim to the supermarket. “The route isn’t pleasant.”

Another customer named Aliza said she felt more hostility from Palestinian employees in the last year. “You’re always looking over your shoulder,” she said, adding that she’s carried a Glock pistol for years. “It’s like a Chicago gangland.”

She claims the supermarket management has removed items from the shelves that could be used by individual attackers. “Go ahead and look for the knives here,” she said. “You won’t find them.”

But other Israeli shoppers said they would continue to patronize the store despite the tense situation.

“I’m a big believer in that supermarket. I think it means a lot to the area; it’s a symbol of how things could work,” said Yaacov Ribner, a resident of nearby Efrat, who makes weekly visits to store, but acknowledged, “A lot of people that work and shop there are Arabs, and we get along wonderfully. The situation has put a dent into that. … It’s just a natural progression of the events. The situation in Israel is too tense. I don’t view every Arab or Muslim as a terrorist, but at the same time you can’t be naïve and you have to look around.”