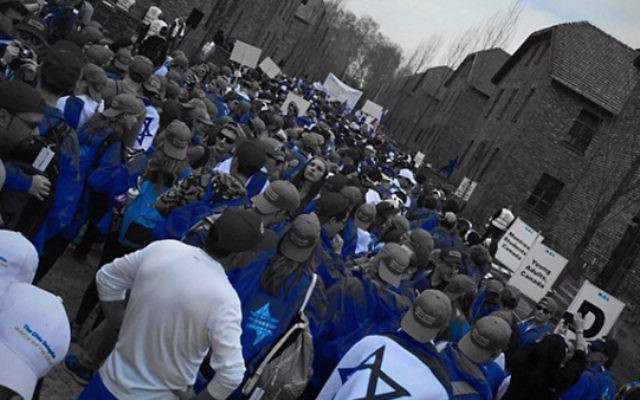 A living memorial: March of the Living participants walk through Auschwitz. Courtesy of Eva Schottenstein

I heard music. I heard people sing prayers overflowing with emotions while marching through some of the most unholy streets imaginable. I heard children sing songs to mourn the deaths of their soldiers — their brothers, fathers and uncles — who all died fighting for their rights to their homeland. I heard crying, and not just sad crying. I heard crying that sounded like it was coming from people who had nothing left inside of them. I heard silence, and that was the first time that I understood what it meant for silence to be loud. I saw, I heard and I witnessed the historic recollection of inhumane acts of hate, discrimination, genocide and dehumanization; the shame of the German nation.

Last April I went on a life-changing journey. The trip was called March of the Living (MOTL). MOTL offers a program to Poland and Israel for Jewish teens who have an interest in learning about their history, specifically the horrible atrocities and crimes that were committed during the Holocaust. Before MOTL, I had a conception of how I saw pain through the eyes of other people. Metaphorically, I compared it to a doctor’s pain chart, the one used to classify the severity of a concussion, let’s say, even though it holds no factual value. All that matters is how the individual tolerates pain. Everyone has a subjective scale of pain tolerance with levels ranging from one to 10.

After my trip to Poland and Israel, I can confidently say that my metaphor was completely and utterly inaccurate. During MOTL, I experienced a variety of emotions all coming from sources outside of myself. I witnessed concentration camps. I saw methods of torture, dehumanization and murder. I saw mass graves, built for 18,000 people who all perished in one day. I also saw 13,000 people of all backgrounds, races, religions, ages and languages, joined together to march in remembrance of such an awful tragedy.

We marched, we listened, we learned, we saw, we felt and we tried our best to understand. We witnessed. We became what one survivor credited as “the Jewish peoples’ revenge.” After experiencing all of this, I can no longer diminish the idea of pain to a simple one-to-10 scale, for I saw things and experienced emotions that cannot be reduced to a number. Pain is incomprehensible at times. No one single person will ever be able to feel even a fraction of the pain that belonged to death day at Majdanek in 1943; not a single person could handle so much. We can list as many statistics and rattle off as many facts as we want, but we will never truly understand just how much was lost in that single November day. However, in 2015 when 13,000 strong MOTL participants marched together in remembrance of those 18,000, we felt a little of what those victims never had the chance to feel — liberation, hope, community.

As I stood in front of the mass grave at Majdanek, isolated both physically and emotionally, overwhelmed beyond words, I looked around and tried to understand what was happening, what I was seeing. I saw crying; more than I am comfortable with. I waited for my own tears to come, but it was my third concentration camp and I had yet to shed a tear. Why wasn’t I crying? Did my lack of emotions take away from my humanity? When I couldn’t cry, I felt intense guilt. Who was I to be even remotely upset about small things, like poor grades or lack of Wi-Fi, when other people endured so much agony? And even more, they endured and they emerged free or died trying. What gave me the right to be a coward? (Photo: Eva Schottenstein at the Western Wall in Jerusalem after her life-changing trip to Poland. Courtesy of Noa Levi)

Following the trip, little things like bad grades or fights with friends simply didn’t affect me the way they once had, because the pain scale I imagined in my head had been broken. March of the Living gave me a lot of things: the biggest one was a reality check. It was indescribably humbling to see what those people, my people, went through and fought against. MOTL also made me realize that, no matter how alone I may feel in my own little world, I do belong somewhere. I, as do others, belong to an infinite number of groups and play an infinite amount of roles. I am a student, friend, daughter, role model, Jew, sibling and annoyance. I am a part of so much that I do not even realize. I feel pain just as everyone else does and I have every right to do so. I also have a duty to empathize — empathize with my fellow teenagers, Jews, siblings, students and peers.

Sometimes, even my own personal, trivial issues seem like too much for me to handle. Other people experience similar feelings every day. March of the Living has made me realize that all pain is relevant, no matter how small, such as shattering your phone or getting cut from a sports team. MOTL has also made me realize that pain can be shared for the better. Going through life alone while sufficient, consistent and clear-cut, is a sad way to live. March of the Living taught me that it’s okay to lean on others and share the pain load, because no problem feels quite as acute when you have someone to hold your hand along the way.

Following the March, I realized that I live in a bubble more than I would like to admit. I often forget that everyone else is feeling his or her own pain, by distinctive yet equally crucial means. I am challenging myself, and you, to abandon your personal bubble for a little while. Everyone around you needs support just as badly as you feel like you do; why can’t you be the one to provide it? In life, there will always be something to be thankful for and something to complain about. Focus on being thankful and helping others do the same. Support and positivity are two of the best gifts that we can give. Deal with your emotions as they come, because every single one, both good and bad, deserves to be felt, and it always makes it a little easier when you feel like you have someone on your side.