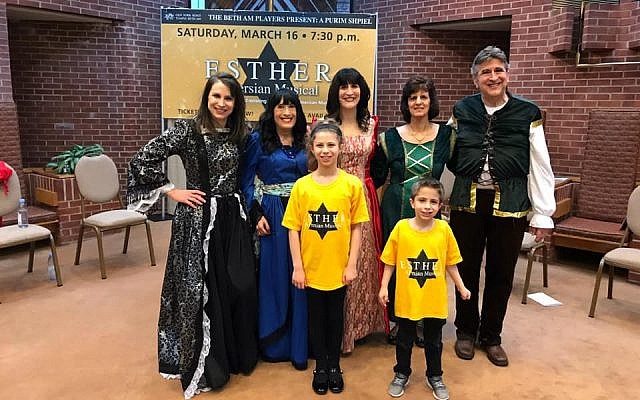 Jodi in the Hamilton shpiel. Courtesy of Jodi Holper Singer

For the past few months, I’ve been doing something a little bit selfish. I’ve been spending part of my weekends rehearsing for and performing in a synagogue show without my husband Dan and the boys. Yes, I can be away from the family for up to a week at a time when I travel for business, but I don’t feel guilty traveling because that’s work. This show was purely for me.

The show was a Purim spiel– it told the story of this holiday through song parodies to music from Hamilton. This was my fifth synagogue spiel as an adult. Back in 2007, when the boys were almost three, Beth Am put on its first show. That year, the theme was Broadway, and my parents and sister Marni were in it. I could not imagine leaving Dan with the boys (one of my son’s has autism) every Sunday to go to rehearsals. The boys were a handful and we often needed two caretakers to watch them, so Dan and I had fun in the audience (with an added bonus of it being a BYOB event, so we split a bottle of wine while we enjoyed the Broadway song parodies.)

The following year, when the theme of a 60s Purim spiel was announced, my mom suggested I audition. She thought I would really enjoy the experience. Marni was very pregnant with my niece, Shaina (and delivered her a month before the show), so she didn’t participate. I arranged for Aunt Sue to help Dan with the boys during rehearsals, along with other sitters. In return, Dan bought tickets to several Philadelphia Union (soccer) games and tailgate events so he could have some days out once the show ended.

And oh, my mom was so right! It had been years since I was in a show, and it all came flooding back – the fun of learning new songs and dances; the stress of wondering if it would ever click when you’re a few weeks out and it’s not even close to ready; and the camaraderie of working together with a group of people you didn’t know well at first, but who have become your friends by performance day because together, you’ve created and invested your time in something great that others can enjoy.

As a parent of toddlers, particularly one with autism, I never even tried to find something just for me outside of the occasional girls night. It’s hard to give yourself permission to do that. I felt like I was treading water every day for three years between the kids, the house, and work – and if I was lucky at the end of the day, maybe there would be an hour to watch TV. Throughout the four or so months of rehearsals, I found myself happier at home and more attentive and appreciative of my family. I noticed a bounce in my step, and I was always humming tunes. There’s something about finding an interest outside of work and family that is good for the soul. It was also nice doing this with my parents, since most of the time we spent together was with the kids.

The day after the show, I couldn’t believe how sad I was. That’s the downside of spending months preparing, and then after a few hours, it’s over. But life was busy and I quickly jumped into planning the boys’ 4th birthday and all of our fun summer plans.

Before I knew it, it was fall again and auditions were happening for a 70s themed Purim spiel. Marni was back and this year, the original four Holpers (Mom, Dad, Marni, me) performed together. This time, the boys were almost five and I thought they could sit through it. They were mesmerized by seeing the family on stage. Afterwards, I introduced Jordan to the man who played the villain (Haman), and he started to cry.  “He’s not really mean,” I explained, hugging him as he sniffled. “He was just pretending for the show.”

Beth Am did not do a spiel the following year, so I decided to audition for Bye Bye Birdie, which was being put on by a synagogue down the street. While it was a fun change being in an actual show vs a spiel, the commitment was double what I was used to and I found myself out of the house two nights a week plus Sundays, which I didn’t enjoy. I remember being very relieved when it was over. Three years passed after that with no Purium shows, although there was a talent show one of those years (not quite the same).

In 2014, Beth Am decided to do the Les Mis Purim spiel. Marni offered to direct and Sue, choreograph. The boys were almost 10 and Jordan had caught the performing bug, having done children’s community theater since he was six. He wanted to be in the spiel, as did Shaina, now six. Even Dan decided to give it a go, and we arranged for sitters to help out with Ryan on Sundays since he had no interest in participating. This was truly a family affair and incredibly fun to do with Dan and Jordan – it was something so different from our usual activities with the kids and each other. It also gave Jordan time with just us, which I know he appreciated, given a lot of what we were able to do as a family revolved around Ryan. Ironically, the same man who made Jordan cry five years earlier as the villain, played the villain again. This time, Jordan as Gavroche Goldberg, had a scene where he jumped up to point his finger in the villain’s face, saying in his cute, little boy voice, “You don’t scare me, You’re just a big bully!”

The Grease Purim spiel, where the same family members participated, was the following year. This was the year we started writing our own music to supplement the scripts we purchased from the writers.

Four years passed quickly after Grease. Jordan got very into school theater during that time along with a variety of other activities. Ryan really enjoyed and looked forward to Sunday Circles (a program through a wonderful organization called The Friendship Circle, which I will cover in a future blog). Dan started a new job. I began traveling internationally. And, we had two years of constant Bar Mitzvahs on the weekends (during which time Beth Am did the Disney spiel and we opted out due to planning two Bar Mitzvahs of our own, but went to see the performance to support the others). So it wasn’t like I missed being in shows with everything else going on. I’d kind of forgotten that exuberant feeling of performing.

When the Hamilton spiel was announced, I had just started listening to the soundtrack and was planning to get tickets for Jordan and me to see it over winter break as Hanukkah gifts from the family. Dan was not interested in auditioning – he didn’t know the music and wanted to be around to take Ryan to Sunday Circle. Jordan was stressed with school work, busy with activities, and hesitant to give up his one free day and Sunday football for rehearsals. So for the first time since 2009, I was the only one of the four of us involved. Now that the boys were 14 and more independent, it was logistically easier to do this. I joined my parents, Sue, Marni, Shaina (11), and Mikey (6), along with the other talented cast members on Sundays and occasional Saturdays to put on what turned out to be (despite our doubts it would ever come together) one of the best spiels ever at Beth Am.

Once again, throughout the process, I thoroughly enjoyed myself and having an outside experience that was just mine. I often found myself humming or outright singing the tunes (sometimes in public – like on the Septa train – without being aware I was even singing odd Hamilton lyrics until I got strange looks!). Dan and Jordan looked forward to my entertaining stories about rehearsals and I looked forward to hearing about their afternoons. And after years of going to Jordan’s shows, it was very cool having Dan and the boys come watch me for a change. While it was the usual let down when it ended, I’m already looking forward to the next one, whenever that is.

My firm, PwC, has a Be Well Work Well initiative, which is about everyday behaviors and habits to help us manage our energy across four dimensions – physical, emotional, mental and spiritual. The goal is, by focusing on habits in all four, we can become and sustain our best selves, both personally and professionally. When I looked at the spiritual list of habits, one of them was ‘set aside me time (something outside of TV or social media) that recharges and renews you.’ An example listed is to do something creative with your friends or loved ones. So I guess being a little bit selfish once in awhile is ok – and even necessary – in order to be your best self.

Editor’s Note: Thank you to Jodi for sharing this wonderful blog which originally appeared here.