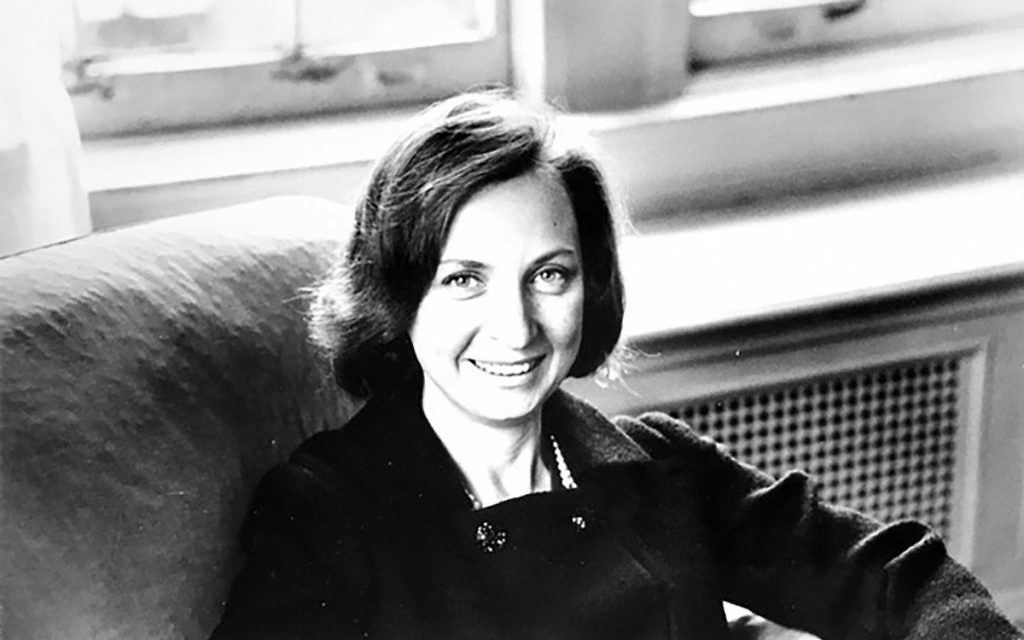 Ann Birstein in a 1966 publicity photo for her book “The Sweet Birds of Gotham.” Photo by Sol Mednick

Ann Birstein played ping pong with a young Saul Bellow, and he showed her how to iron shirts for her husband, Alfred Kazin. She learned to do the twist at James Baldwin’s birthday party. When she would meet Isaac Bashevis Singer for blintzes, he tried to seduce her into translating his stories from Yiddish to English.

While married from 1952 to 1982, Birstein, a writer, and Kazin, the late literary critic, were at the center of a group known as the “New York intellectuals,” a world of parties, publishing and talk of things literary, political and cultural. She once told The Jewish Week that although “New York” was a code for “Jewish,” many of their friends were not. At their Thanksgiving dinner, she liked to ask Ralph Ellison to carve the turkey.

Birstein, a novelist, memoirist, film critic, essayist, teacher and, most recently, blogger, died at her Manhattan home on May 24 after a long illness. She was just days short of turning 90.

The author of 10 books, she published fiction and nonfiction, and in memoirs wrote about growing up as the daughter of the founding rabbi of the Actor’s Temple (“The Rabbi on Forty-Seventh Street”) and her 30-year marriage to and divorce from Kazin (“What I Saw at the Fair”).

“I’ve been lucky. I’ve had a rather amazing life,” she told The Jewish Week in 2003, when “What I Saw at the Fair” was published.

In person, Birstein was sharply funny, stylish, opinionated and a great conversationalist who noticed everything. She cared deeply about Israel and Judaism.

Birstein’s daughter Cathrael Kazin tells The Jewish Week, “I taught English at the University of Iowa and I didn’t realize that the entire syllabus had been in my living room — Robert Lowell, Jorge Luis Borges, Saul Bellow. People assumed it was because of my father. But it was really my mother who was their friend.”

On their first date, Birstein read parts of Kazin’s “Walker in the City,” then a work-in-progress, and made suggestions and helped clarify the title. He asked her to marry him that evening, but it took some time for her to agree. Throughout their marriage, she was anonymously involved in his writing, seen in his literary shadow even as she wrote her own books.

Their marriage was passionate and tempestuous, marked by his physical and verbal abuse, as she wrote in “What I Saw at the Fair,” published after his death. To her credit — and it wasn’t easy for a woman at the time — she went on to support herself as a writer and teacher of writing while still enjoying a cosmopolitan life. She taught at Barnard and the University of Iowa, among other places.

Birstein grew up in Hell’s Kitchen, down the street from the Actor’s Temple. She describes the congregation as filled with actors, comedians, Vaudevillians, radio stars and prizefighters. On Yom Kippur, she, her mother and three sisters (and the mother of Milton Berle) would look down from the “Ladies Balcony” to see Berle, Eddie Cantor, Jack Benny, Red Buttons and once a young Frank Sinatra, who had been invited along.

Birstein graduated from Queens College (where her papers are housed) and studied at the Sorbonne on a Fulbright. She published her first novel, “Star of Glass,” at 23. She was a novelist of manners, with wry humor, who understood the many layers of human interactions; her memoirs were written with a novelist’s eye for character and complexity.

Birstein was a loyal, loving friend, very generous about bringing friends together. She’d invite me to join her and her pal Bel Kaufman, the late writer and granddaughter of Sholem Aleichem, for lunch. Kaufman was in her 90s and Birstein was more than a decade younger, and the two of them regaled waiters and received much attention, but mostly they just laughed so well together.

In 2011, we invited her to contribute to The Jewish Week’s supplement Text/Context on the theme of loss, and she quickly came up with — and this isn’t easy to pull off — a very funny piece called “The Funeral Whisperer,” about watching family and friends go the way of obituary and biography.

“Which brings me to my own funeral, of course, a subject that superstition compels me to avoid,” she writes. “I can only say, thinking back to my father’s grand funeral where his synagogue was packed from bima to balcony with people weeping, that in my case the surprise will probably be who’s left to show up.”

At her funeral last Sunday, family and friends of all ages gathered to remember her with stories and poetry; recounting some of her lines received much laughter. I like to think she would have been pleased.