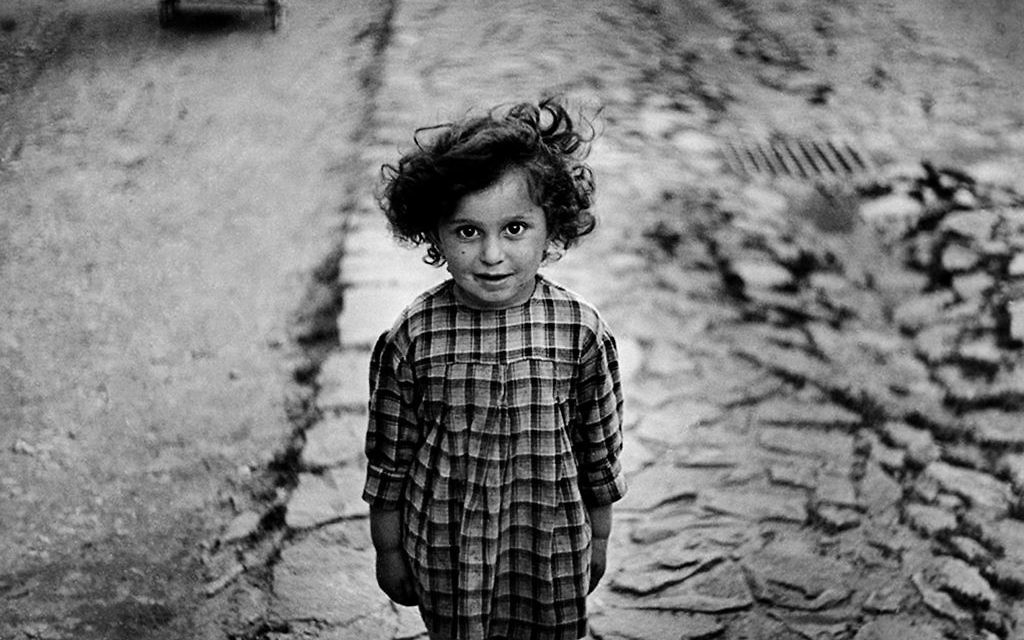 A group of young Jews gather outside in a farmyard for morning assembly, creating an open square, their shadows also in perfect formation. These are teens in 1938 doing hachsharah, training for emigration to Palestine, in a program organized by the German-Jewish community in the 1930s.

One young woman glances back over her shoulder, peeking at the camera and photographer, Roman Vishniac.

That little-known image is on view at the International Center of Photography in a major new exhibition, “Roman Vishniac Rediscovered,” including many images that have not been previously exhibited, published or even printed. The show includes some of the iconic images the photographer is well known for — piercing portraits of impoverished Eastern European Jews in the 1930s — and goes far beyond to include photographs taken before, during the same period and after, to provide a much fuller view of his artistry.

In fact, only 2 percent of Vishniac’s work was ever published, according to ICP adjunct curator Maya Benton, who organized the show. Many of the prewar photos seen for the first time are views of women, secular Jews and muscular youth; some that had been previously cropped are printed full frame and reveal details, sometimes people, that had been left out. These, along with his photojournalism and portraits taken after the war in Europe and America, highlight his strong sense of composition and modernist sensibility.

“He is a much more versatile photographer than we could have imagined,” says Benton, who has been working on the Vishniac archive with the family since 2001 and has pieced together many of the mysteries of his work and life.

In a tour of the exhibition, Benton explains that Vishniac, sent to Eastern Europe by the American Jewish Joint Distribution Committee (JDC) in the 1930s, was documenting the lives of poor Jews at the same time that photographers like Walker Evans, Dorothea Lange and Ben Shahn, were documenting rural poverty in America. He’s very much part of that social documentary tradition. At other times, Benton compares his work to photographers Henri Cartier-Bresson, Man Ray and Robert Frank, underlining the point that Vishniac is one of the great photographers of the 20th century.

I came to love photography in part through Roman Vishniac. I remember seeing a show of his work in the 1970s at The Jewish Museum, and the faces — especially the eyes — of his subjects stayed with me. I’m sure this is true for many readers. Vishniac’s images speak out across decades, right to the heart; they’ve become communal memory. Back then I was also struck by the story of how the photographer hid his camera in his coat so that his subjects and the authorities wouldn’t know what he was doing. From Benton, I learn that the camera-in-the-buttonhole is a legend, that he indeed traveled with two large cameras, a Leica and a Rolleiflex, and used them interchangeably. She points out that the cameras are sometimes reflected in his images.

The challenge of this show is that there’s so much to look at, so many overlapping chapters of Vishniac’s career to consider.

Vishniac was born in 1897 to an affluent and secular Jewish family in Pavlosk, near St. Petersburg. Always interested in microscopes and photography, he studied zoology and biology in Moscow. He moved to Berlin in 1920, where the self-trained photographer began documenting street scenes. From 1935 to 1938, he made several trips to Eastern Europe, commissioned by the JDC. His work was first exhibited in the JDC offices in New York City in 1938 (and some of those prints are exhibited here for the first time since). In 1940, he was arrested in France, but released some months later and the family managed to sail to New York, arriving in January 1941. He promptly opened a portrait studio.

In January 1942, Vishniac sent a letter to President Franklin D. Roosevelt on his birthday, along with five photographs depicting the suffering of Jews in Europe. His hope was to encourage the president to take immediate action to prevent the annihilation of the Jews. That letter is on exhibit too.

Mara Vishniac Kohn, the photographer’s daughter, is executor of the estate, and has given the collection to ICP. An educational therapist who came to New York from her home in Santa Barbara, Calif., for the opening of the exhibit, she said that some of the featured photos were part of her life growing up, but that she was also seeing many images for the first time.

She recalls helping her father print his early photographs in their Berlin apartment. In one of the showcases of memorabilia throughout the exhibition, there’s a photo of her ice-skating in Berlin in 1934. She’s also featured in some of his Berlin photographs: the young girl is posed in front of Nazi posters — it was forbidden to photograph these, but Vishniac appeared to be taking pictures of his young daughter.

Among his street scenes in Berlin are “Recalcitrance,” an elegant woman in 1926 walking a dog who’d rather stay behind, and a group of butchers in the early 1930s celebrating their graduation. These photos are carefully composed, with touches of humor, but the growing Nazi presence is evident in later photos. While he was shooting these outdoor scenes, he was also documenting Berlin’s Jewish community as it turned inward, establishing its own health clinics and soup kitchens for the formerly middle class.

Vishniac was the only photographer to document life in 1938 in Zbaszyn, a Polish detention camp for Jews expelled from Germany. In one scene, a man wrapped in his tallit and tefillin prays from bed. Some of the people in these photos were tracked down, and one woman credits Vishniac’s photographs with her ultimate release from the camp. Also in 1938, he shot two silent films of Jewish life in Carpathian Ruthenia and Galicia that are lost, but some of the outtakes were found and are screened here.

Viewers will recognize the image of a young boy in cheder (religious school) sitting at a table, books open and looking at the camera with shyness and curiosity. The image was first published in 1947, as the cover of the book “Polish Jews.” Adjacent to the image in the exhibit is a photo of and interview with David Eckstein, the 7-year-old yeshiva boy now a grown man and now a Buddhist, reflecting on life in Brod.

When Benton came across an unlabeled cache of negatives of young people doing construction and farm work, she noticed, in looking carefully with a magnifier, that many of the students were wearing wooden clogs. She was then able to trace the photos to Werkdorp Wieringen, a Zionist training camp in Holland, and Vishniac’s visit there for the JDC in 1939.

After the war, Vishniac went back to Berlin, and his photographs — most never printed nor published — show a city in ruins, with a young boy standing on a pile of rubble and a slender woman with one leg, walking on crutches, in 1947. He also photographed the Displaced Persons camps, showing the first steps of rebuilding lives, capturing the hopefulness of refugees singing in front of a portrait of Theodor Herzl.

Back in the U.S., his work was varied — portraits of well-known figures like Albert Einstein and Yiddish theater/film star Molly Picon and immigrants (including three sisters just after they arrived and then dressed in identical dresses in Central Park), Jewish institutional life, even a bar mitzvah album. Featured here, its unposed portraits are shot with a photojournalist’s eye in June 1948, at the Forest Hills Jewish Center, just after Israel declared statehood. Vishniac also documented street life again, and included are some views of immigrant life in Chinatown. He died in 1990.

Vishniac saw so much of humanity and still, throughout his life, he remained interested in viewing the invisible world. He was a pioneer in the use of polarized light. The room in the exhibit devoted to his micro-photoscopy is dark, with his colorful cell photos projected onto a wall, resembling the view through his microscope, which is also on exhibit.

The Roman Vishniac Archive at ICP, a partnership with the U.S. Holocaust Memorial Museum, includes tens of thousands of prints, thousands of negatives, contact sheets, personal correspondence, film footage and vintage prints. All of the negatives are being digitized and will be available online.