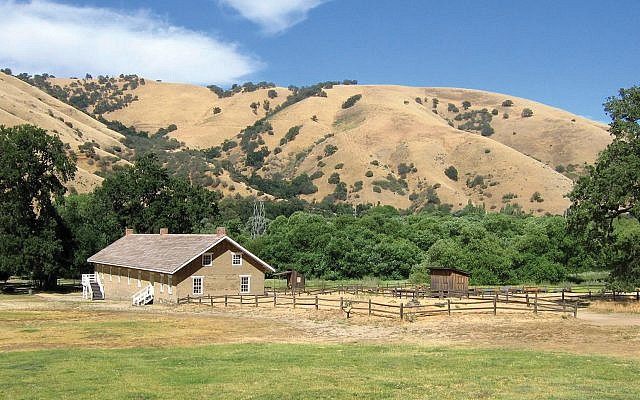 Editor’s note: This is the second of three articles on California.

Of the many possible California road trips, the I-5 is, in my view, the most unsung.

All the attention goes to its glamorous, cliff-hugging counterpart, the Pacific Coast Highway, one of the most glorious drives anywhere — and an inspiration for countless narratives of finding oneself amid the Big Sur pines.

The 5 (in California, freeways take the definite article) has no such genre. You take I-5, the inland route, when you want to make time; it’s the most expeditious trip between the Bay Area and Southern California.

What’s Jewish about I-5? Absolutely nothing, as far as I can tell, except that it connects two destinations very popular with Jews. Like Oggi, Zelda and me, a lot of you will end up traversing it, too. And it has plenty of highlights if you know where to look.

The three of us were headed south from San Francisco, about an hour west of the 5. Google Maps suggested I route through Oakland, which surprised me because, well, Google, being local (headquartered near San Jose), should know that Oakland can be traffic-laden. Instead, we drove south on the 101 through Silicon Valley.

The hour or so between the 101 and the 5 at this point is one of the prettiest drives in America. It starts in Gilroy, America’s fragrant garlic capital, where we rolled down the windows and inhaled the allium scent.

A country road snaked along hillsides shimmering with orange poppies and yellow wildflowers from this year’s super bloom. We passed a dozen old-timey farm stands, piled high with strawberries and grapefruits, until Oggi’s will broke down and we pulled over for a snack (my husband, like my father-in-law before him, hates to stop en route).

Finally we left farms behind and wound through gorges in Pacheco State Park before climbing a mountain pass alongside the San Luis Reservoir, a vast inland sea.

On I-5, the hills gradually recede into California’s Central Valley, the so-called breadbasket of America. Compared to Big Sur, endless lettuce fields, cherry orchards and rectilinear bean grids hardly count as scenery. But to a child of the East Coast, the vastness of this wide-open landscape is, in its own way, awe-inspiring.

As are the exotically Western place names: Mercey Hot Springs, Blackwells Corner and Lost Hills. Flat fields turn into ridges tufted with sagebrush. About three and a half hours past Gilroy, and just past the cutoff for Bakersfield, huge mountains loom into view ahead, growing taller and more majestic until you arrive at Fort Tejon.

Fort Tejon, a 19th-century military outpost and national historic site, is famous for being the site of a huge 1857 earthquake, hosting Civil War re-enactments, and selling the most expensive gas this side of Hawaii. But fill up; you’ll need it to get through spectacular Tejon Pass, a 45-minute, high-altitude route through the San Emigdio Mountains.

For me, the highlight of this region has always been Pyramid Lake, which emerges from between the mountains like a Californian fjord. Take the Vista Del Lago exit for an enchanting detour, complete with beach.

Back on the 5, bright lights come into view, and you’re officially in Southern California. The 5 cuts through the eastern San Fernando Valley, hugs the green hills of Griffith Park (a wonderful stop for hiking and views), skirts the downtown skyscrapers, and slices through Anaheim (home to Disneyland) before arriving at what is arguably its most glorious stretch: the Orange County coast.

South of Laguna Beach, I-5 becomes the coastal route. The highway narrows and hugs the blue Pacific, surrounded by wildflowers and cacti, waves crashing off to your right. To my mind, the Orange County coast has all the loveliness of Malibu and Monterey, but feels more intimate; without mountains in the way, it’s all sea, sky and desert blooms.

San Clemente, a surfing mecca, makes a natural stop. Along with sunsets on its famous pier, the town offers a bit of California history — Spanish-colonial buildings and Nixon’s “Western White House.”

A little ways south, and you’re in La Jolla, a jewel-box village and gateway to San Diego. The end of the line for I-5 is San Diego Bay, with Tijuana across the Mexican border.

But the 5 has done its job. In under eight hours, you see California’s greatest hits —mountains and valleys, cliffs and beaches, glittering burgs and historic towns.

“Which country are we in now?” murmured Zelda sleepily, as we pulled off to visit friends in Redondo Beach. She didn’t believe my explanation — that California is all part of the same America as Massachusetts and New York and Florida. Someday, I thought, she’ll understand.