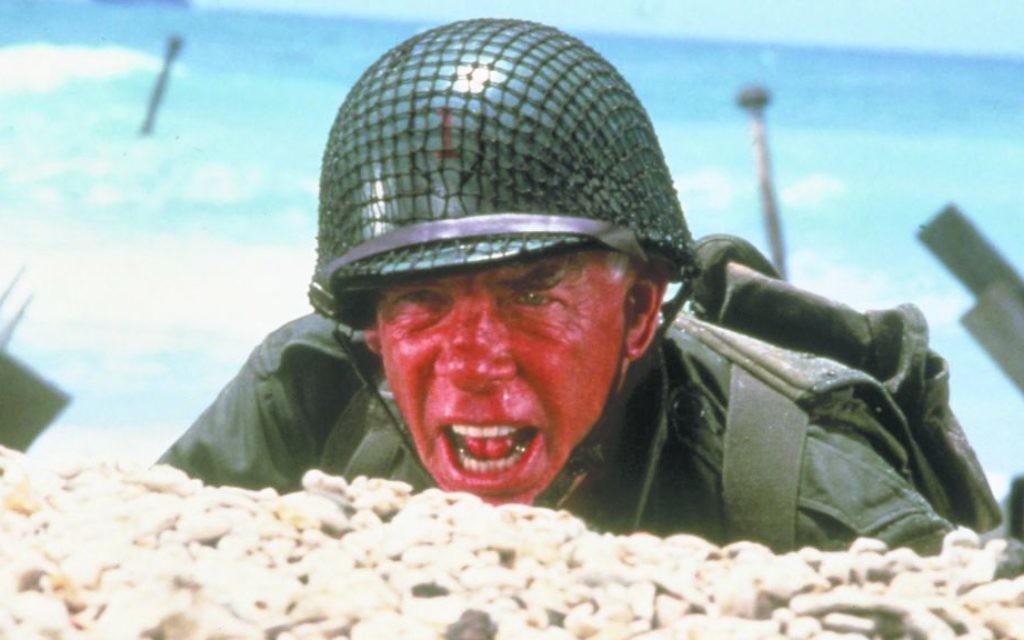 At the end of Samuel Fuller’s epic World War II tale, “The Big Red One,” the young GI Zab (Robert Carradine), a writer at the beginning of his career, says, “The only glory in war is surviving, if you know what I mean.” He is speaking as the filmmaker, who was a rifleman with the First Infantry. Like the four-man squad whose story the film tells, Fuller fought his way from North Africa to Sicily, up the Italian boot, then from Normandy across France and the Low Countries and into Germany. Like them, he survived to tell the story. When the resulting film, a lifelong dream for Fuller, was released in 1980, it was the best film of the year. But it was a skeletal remnant of Fuller’s dream. According to its website, the Museum of Jewish Heritage is showing that very fine skeleton on Wednesday, Oct. 10, as part of a series on Hollywood filmmakers who directly witnessed the Shoah as members of the U.S. armed forces.

Nearly a quarter-century after its initial release, Richard Schickel, longtime film critic for Time magazine, reconstructed “The Big Red One,” restoring 40 minutes of excised footage. It was a labor of love for Schickel, but the real rewards belong to those fortunate enough to see the film at its new 162-minute length. Indeed, the museum’s apparent choice of showing the initial version is puzzling. While the 1980 version is an excellent film, it had some structural problems that gave it an unwieldy rhythm and a few odd continuity lapses; the restored version is, quite simply, a masterpiece, one of the great films about WWII. However, even in its truncated form, “The Big Red One” is a startling grunt’s-eye-view of modern combat.

Fuller’s world is built on paradox (as befits a guy who, on the set, could wear a mask to keep out dust while smoking a cigar). Like his great 1957 western “Run of the Arrow,” “The Big Red One” begins and ends with the last killings of a war, each of them taking place after the cease-fire has been declared. For Fuller, the distance between legalized killing and murder is incomprehensibly narrow. “We don’t murder,” says the sergeant (Lee Marvin, in a performance that sums up his superb career), “we kill.” Concomitantly, the line between acceptable behavior and madness is stretched so thin that in one of the later scenes in the film, a firefight breaks out in a (literal) madhouse, with events rendered more brutal when one of the inmates grabs a machine gun.

Fuller, the son of Benjamin Rabinovitch, a Jewish immigrant from Russia, and Rebecca Baum, a Jewish immigrant from Poland, is one of only two American filmmakers, to my knowledge, who actually saw the Nazi concentration camps. (The other was George Stevens, who would direct “The Diary of Anne Frank.”) Fuller was with the detachment that liberated Falkenau, a satellite camp in Czechoslovakia. He had been carrying a 16mm movie camera with him, a gift from his mother, and at the urging of his captain, the young rifleman filmed what he saw there. The experience left scars on his psyche that clearly never healed.

Fuller exorcises some of those demons in the film’s penultimate sequence, a lengthy firefight and its aftermath in a concentration camp. In the 1980 version of the film, this material was powerful and bleak but had a certain lack of context that caused those scenes to unbalance the film’s overall design in subtle ways. In the reconstruction that problem is resolved with several newly added sequences leading up to these scenes, and they give them an even greater power. In either version, the sequence represents an agonizing catharsis unlike anything in an American-made film about the war. It is unlikely that an American filmmaker will approach these events again with anything like the force and barely suppressed rage that Fuller brought to them. After all, he was really there.