NEW YORK — I had to stifle a laugh as I read the list of ingredients for the almond cake. Along with the almonds, sugar, eggs, flour and baking soda was this unexpected ingredient: “A touch of mice.” The recipe had been translated for me from the original German, but what could that mean?

The mystery of the “mice” was just the final chapter in a more than century-long saga. At some point after her wedding in the late 1800s, an Orthodox Jewish housewife named Betti Rosenbaum Bachenheimer took a small booklet and jotted down 18 of her favorite recipes in “Alte Deutsche Schrift,” an old style of Gothic German handwriting.

Betti, who lived with her husband Aron and their three sons in Rauisch-Holzhausen, a village north of Frankfurt, baked and cooked typical concoctions of the time —  all kosher, of course.

There were recipes for Gewürzplätchen and Mandeltorte (gingerbread cookies and almond cake), Schokoladenguss and Kastanienauflauf (chocolate glaze and baked chestnuts), and Kartoffelauflauf, a “potato bake” that includes directions to soak matzah in wine, then layer it with a mixture of potatoes, eggs, almonds, cinnamon, lemon juice and raisins.

Betti was my great-grandmother, and although she died 25 years before I was born, I’ve tasted some of her baked goods over the years. Her oldest son Siegfried, my grandfather, married my grandmother Jenny in 1928, shortly after Betti’s sudden death at age 54; Jenny ended up with her mother-in-law’s recipes. 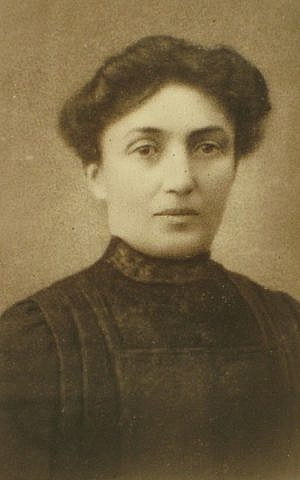 Betti Rosenbaum Bachenheimer, namesake of the author’s mother and original writer of the recipe book. (Courtesy)

In 1929, Jenny gave birth to my mother, who was named Brunhilde in memory of Betti. And in 1993, Jenny, then 91, gave the precious booklet to Brunhilde (who changed her name to Bunny after the family escaped Nazi Germany in the 1930s — a name that was quite a bit easier for her new friends in the Bronx to pronounce.)

I’ve always been intrigued by Oma (Grandma) Betti. Of all the photos I’ve seen of my ancestors, she’s the only one to whom I think I bear any resemblance. Although my grandfather died when I was a child, his younger brother Henry once told me all about her.

“She was a good, honest person,” he recalled. “She always had an open house for poor people. Polish Jews would come to town, and most were poor, so she would feed them. But they were never sure if we were as religious as they were, so they would only have a cup of coffee and eat herring.”

“If they had no place to sleep,” Uncle Henry continued, “she would let them stay in what we called ‘the good room’ upstairs, which was only meant for company.”

Betti, who was widowed in 1912 when her 35-year-old husband died of a ruptured appendix, struggled to provide for her young sons and make sure they adhered to Jewish values.

“When I was about 9 years old,” Henry laughed, “I went with some friends to try to steal apples. One of my friends was throwing rocks, and one hit me in the head. I ran home, bleeding, and my mother said, ‘See, God punished you for trying to steal!’”

Henry described Betti as a characteristic homemaker of her time and place, with some unconventional qualities.

“On a Sabbath afternoon, she would sit with the gentile women,” Henry said. “I asked her once, ‘Why don’t you sit with the Jewish people?’ She said, ‘They only talk about others. With my gentile friends, we talk about gardens, the fields, the weather, but not about other people.’ She was all right, my mother!” 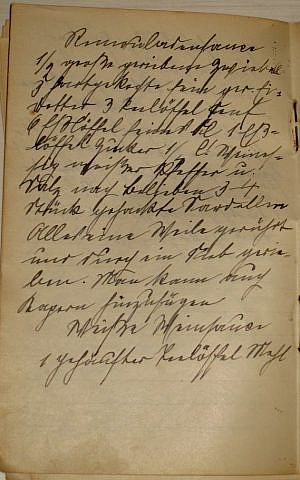 I asked how Betti passed away so young.

“It was just before Passover,” my great-uncle explained, “and you know, you have to clean the whole house from top to bottom. She overdid it, she got a cold, and that was it.”

I have some doubts about whether “overdoing it” could lead to an early death. Then again, having grown up observing my mother and grandmother bring new meaning to the phrase, “Cleanliness is next to Godliness,” it does seem somewhat plausible.

At the time of her death, Betti was planning to sell the 300-year-old Bachenheimer home and move to the neighboring village of Kirchhain, where her son and soon-to-be daughter-in-law had secured an apartment.

She never did live in Kirchhain, but my mother and her parents did until 1933, when the Nazi boycott of Jewish businesses forced the young family to move in with my grandmother Jenny’s parents. My mother has vague but fond memories of riding around Kirchhain in her father’s horse and cart.

Some time after my grandmother handed Betti’s recipes to my mom, I asked where they were. She had no idea, and they ended up missing for 25 years. This year, my mother, sister and I were cleaning out her apartment in preparation for her to move. As we went through thousands of cards, letters and documents, I heard my mother softly say, “Oh, wow — look what I just found.” And there were her grandmother’s recipes.

Old German script is incomprehensible to most Germans today, and while I could make out a word or two here and there, I knew we needed expert help. A German academic who’s written a book on the fate of the Jews of that area named Anna Junge, whom we met on a trip to my mom’s hometown in 2009, had an idea.

Junge contacted a teacher at the Alfred-Wegener High School in Kirchhain, Barbara Sonnenberger, who happily agreed to take on the project. She enlisted the help of her colleague Miriam Haag, who could decipher the handwriting. 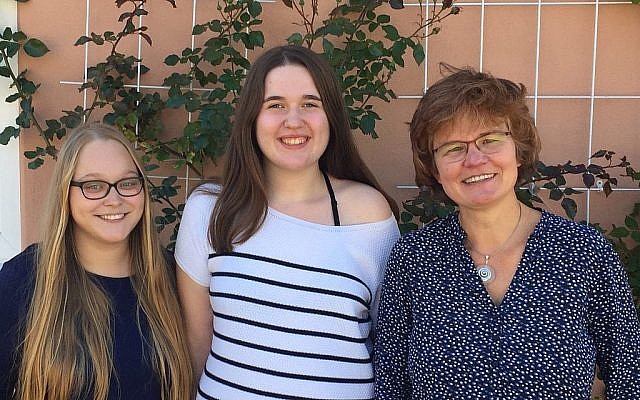 Sonnenberger recruited two of her students, Franziska Badouin and Katharina Koch; for her “final exam” project in high school, Koch is conducting research on the history of the Jews in her village, a few miles from Kirchhain.

Sonnenberger is a founder of the local chapter of the Stolpersteine enterprise, which installs commemorative brass plaques in the pavement in front of the places Jews lived before being deported or forced to flee from their homes. Plaques have been placed in more than 600 German cities and towns, and in seven surrounding countries as well.

Badouin and Koch are also involved in the effort, which has set 51 Stolpersteine (“stumbling blocks”) in Kirchhain since 2015. As Sonnenberger wrote, “Our aim is to give each name a face and individual history, including the history of everyday life before the Holocaust. That’s why Betti’s recipes are a treasure for us too.” 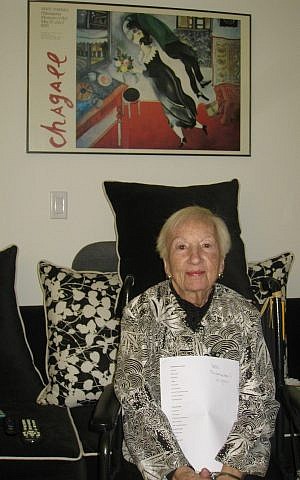 In addition, Sonnenberger explained, “During our research about the Jewish families of Kirchhain, we are glad to get in contact with descendants. It is the most interesting and also the most moving and touching part of our work.”

The four toiled for months to translate Oma Betti’s scribbles into modern German, then into English. As Koch wrote, “It was so special for Franziska and me to translate them, and it was very interesting for us to read these old, original, handwritten recipes. We are very happy about your discovery of these treasures in your mother’s apartment.”

Sonnenberger noted that during the process, the girls “stumbled upon some ingredients that are not very common anymore, such as chestnut flour. However, some of the recipes are still common around Kirchhain. For example, the Butterplätzchen and Nusskuchen, (butter cookies and nut cake) to this day, are still made the same way.”

The translations were sent to me last month. Just before Rosh Hashanah, I handed them to my mom, as a surprise, and took a photo of her holding them. As she nears 90, she is now quite ill.

“It is wonderful and exciting that they did this for us,” she commented. And then my mother, whose baking and cooking skills were legendary, added poignantly, “I’m just sorry I didn’t have these when I was still baking.”

I emailed the recipes to all of Betti’s descendants. My mom’s first cousin Beverly (also named after her grandmother), wrote “I often bake with my 8-year-old grandson Elijah. We went over the recipes and he chose the gingerbread cookies, which we plan to make as soon as I get the ingredients.” It was exactly the response I’d hoped for. 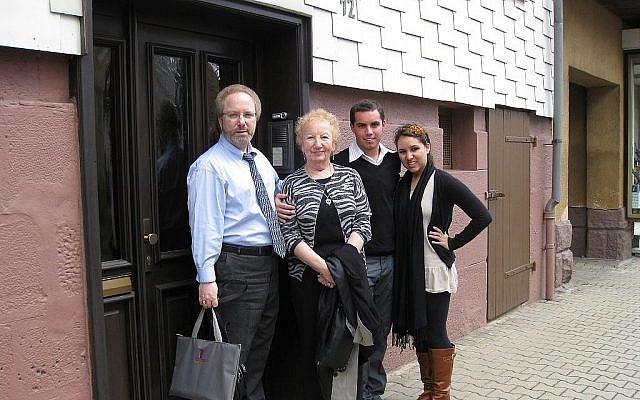 Steve North, left, with mother Bunny North, née Brunhilde Bachenheimer, and her grandchildren — the author’s nephew and niece — Aviv Gilboa and Talia Gilboa, outside Bunny’s childhood home on the Untergasse in Kirchhain in 2009. (Courtesy)

As I perused the translations with my mother, I asked “Do you have any idea what this could mean, ‘a pinch of mice?’”

“They mean mace,” she immediately replied.

“Mace?” I exclaimed in utter ignorance. “Like, the toxic self-defense spray?”

I’d never heard of it; mystery solved. Ninety years after Oma Betti’s death and my mom’s birth, they both taught me something new.

Boil chestnuts in hot water then peel off the skin, boil again in 1 L of milk, press them through a sieve. Beat the butter until it is fluffy. Mix it all together and bake it in the oven for 45 minutes.