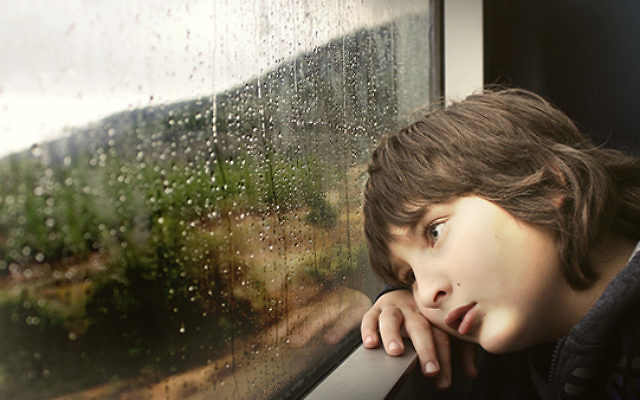 A little girl sits alone on a train. Where is she heading? What happens next? You decide. Pixabay

The last I was with my Abba, we were in the Grand Train Station.

We were standing by a pole on the platform when my nagging finally got to him — I mean a 6-year-old has got that kind of an effect on her dad.

“Snookies, I’ll be back in five minutes,” he said to me in Hebrew as he ran toward Randy’s, the bar we had just passed on our walk over, while I sat patiently awaiting our departure. And so, I sat, one minute, two minutes, five minutes, 10 minutes — still no sign of my Abba.

I began to worry. Surrounded by thousands of people I felt trapped inside a box, unattended and all alone. I remembered what my Abba had told me before our official move, about talking to strangers, but I began tugging, in search for answers, on the red T-shirt of the teenage boy sitting on the bench in front of me. It was clear that a little girl like myself, nearly 6 years old, had struck no feelings within him; like a typical teenager, face stuck in the screen of his iPhone, he couldn’t be bothered by my request for assistance.

I tugged again, hoping he would turn. Still no response; my heart was racing in nothing but distress.

Finally, after another yank on his shirt, he turned, his head facing mine, my lips failing to move. He responded with a prompt “What’s up?” which I didn’t understand at the time. Frustrated with my inability to understand, I look around for clues, some sort of sign. Something written on his shirt, his skinny jeans and maybe even the navy blue baseball cap, which sat backwards on his head, when it suddenly began to shine. Through the corner of my eye I saw it, the Jewish star necklace, peeking through the v-neck of his T-shirt, and I jumped in excitement like a child on the first night of Chanukah. I spoke in Hebrew.

“Have you seen my Abba?” I asked, staring into the Star of David, the key to opening doors of communication, leading me on the path to my Abba.

He was quick to question my words so I tried to remember the few English words Abba taught me on the ride here; unfortunately, my mind went blank. I waited, five minutes, another 10 and suddenly the train arrived, with no sign of Abba.

Pointing at his phone, I asked, “You have telephone?”

Finally he understood me, handing me his most prized possession, as I recalled a song that Abba taught me only a few weeks ago, to help me memorize his phone number. “Plus teysha, shevah, shtaim” (+ 972), I started, as the rest of the numbers slowly began to jumble in my head, the sound of the approaching train was all I could think about. I heard the train arrive on the tracks — trickity trap trickity trap followed by a choo choo — and the call for all Section One passengers to board (that included the teenage boy), but he waited as I stood singing Abba’s song, listening to each ring, hoping he’d pick up.

“Last call for train number 313,” said the conductor looking into my worried, teary eyes, watching as children walked around with their parents, my Abba nowhere to be found.

Walking toward the train, the conductor handed me a chocolate chip cookie and an apple juice box while I showed him my ticket and he instructed me to hop onboard. Hesitantly I reached out my left foot first, grasped onto Fluffy, the stuffed bunny Abba gave me, as the conductor grabbed my Hello Kitty suitcase from behind me and I settled in my seat.

I watched as the other children sat beside their Abbas, the empty seat beside me, reflective of my life without my only parental figure, my greatest hero, my Abba.

When suddenly outside my window Abba appeared, holding a box of pizza, watching as the wheels on the track began to move, trickity trap trickity trap. My heart dropped, the taste of pizza filled my mouth, and my Abba began fading away.

I will never forget the look in his eyes, the feelings in my heart as I began sliding out of my Abba’s reach. I continue to think about how differently things would’ve ended if I was a little more patient, Abba was a little more precise and the train had left a little bit later.

Unsure of what to do, or what to say, I scream in Hebrew, “Atzur! Atzur!” (Stop! Stop!) But of course, nobody understood.

What happens next? Get your creative juices flowing by writing the next installment of “A Girl On The Train.” Send an email expressing your interest to freshinkforteens@jewishweek.org.