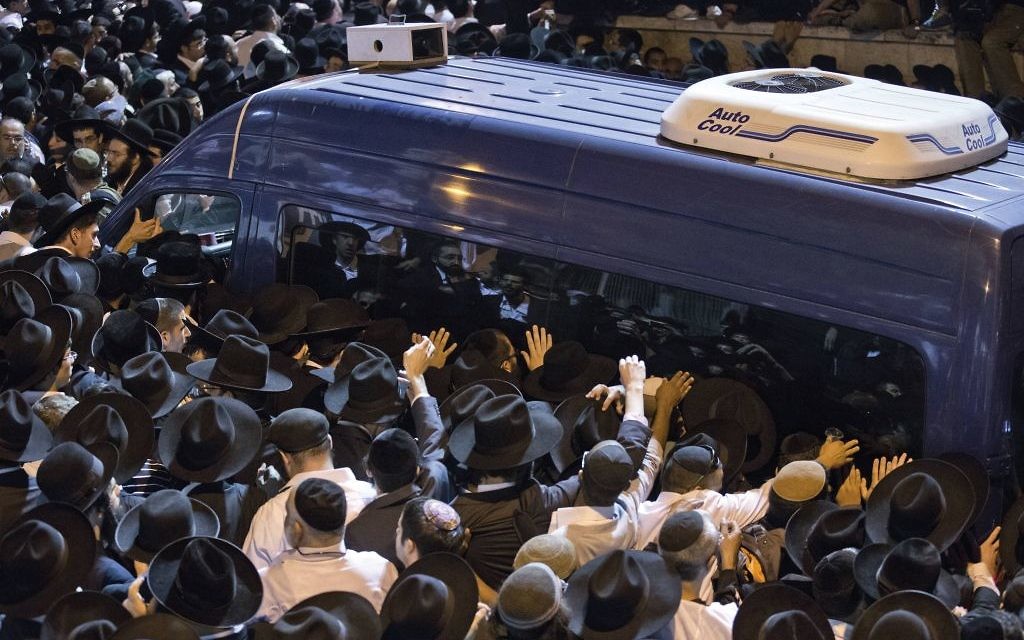 Rabbi Ovadia Yosef’s funeral in Jerusalem on Monday was the largest in recorded Jewish history; it drew an estimated 800,000 attendees, fully one-tenth of Israel’s entire population, with barely five hours’ notice. Thousands rent their garments in mourning. Jews around the country sobbed. The media held vigil in the hospital corridors during the rabbi’s last hours, as disciples and politicians came to take leave.

Rav Ovadia, as he was known, who was 93, served in a variety of rabbinic capacities, culminating with a term as Israel’s Sephardic Chief Rabbi from 1973 to 1983. He then played a key role in the founding of Shas, a Sephardic religious political party, eventually becoming the central figure in the party, making and breaking government coalitions. Throughout, he continued to author halachic compendia and responsa and to deliver a weekly lecture broadcast to hundreds of thousands in Israel and around the world.

Yet this massive outpouring of grief, reminiscent of the funerals of popes and kings, is atypical even for the greatest of rabbis and political kingmakers. Moreover, at the time of his passing, Rav Ovadia had already been the subject of half a dozen biographies and several doctoral dissertations. This level of interest and adoration is simply unprecedented. What made him so singular?

The Hebrew word “gaon” has three distinct meanings, each of which was embodied by Rav Ovadia Yosef.
The most familiar contemporary meaning of the word is “genius.” Though recent times have seen the inflation of this term to include garden-variety geniuses, it was once reserved for the once-in-a-century minds like Rav Ovadia’s. “The Gaon,” with the definite article, is Rabbi Elijah of Vilna (d. 1797), legendary for his unwavering diligence and eidetic mastery of the entire rabbinic corpus; it is no stretch to say that Rav Ovadia was the greatest Torah scholar since the Vilna Gaon. His responsa are encyclopedic, containing hundreds of references to obscure and unknown Jewish text. According to legend (which may or may not be true, but is not said of anyone else), Rav Ovadia once engaged in a John Henry-like competition against a newly developed digital database of Jewish works. He listed every single instance of the search term in rabbinic literature with two exceptions: the term’s appearances in Rav Ovadia’s own works.

Heads of the great Babylonian Talmudic academies of the latter part of the first millennium were also called Geonim (plural of Gaon). These rabbis were the ultimate referees of Jewish law, fielding questions from all over the known world (though mainly the Muslim world) and establishing the Babylonian Talmud as the authoritative source of halacha. The relationship between the Geonim and the exilarchs, the powerful political leaders of Babylonian Jewry, often shifted from close collaboration to outright defiance. Similarly, Rav Ovadia was a prominent halachic decisor who unified much of Mizrahi (Sephardi) Jewry under his reading of the moderate and non-mystical Aleppan halachic tradition and marginalizing alternative traditions, particularly those of Morocco and his native Iraq. His halachic rulings occasionally affected major Israeli policy decisions — airlifting Ethiopian Jewry to Israel and signing the Oslo Accords are two prominent examples — though his relationship with the government ebbed and flowed. In this sense, too, Rav Ovadia was a modern-day Gaon.

The original, biblical meaning of the word gaon, however, is “pride.” “He chooses our heritage for us, the pride (geon) of Jacob, whom He loves” (Psalms 47:5). The halachic and political dimensions of Rav Ovadia’s life work were both attempts to reclaim the pride and dignity of Mizrahi Jewry. Discrimination and bias against Mizrahi Jews and their traditions were ubiquitous in the early years of the State of Israel, as the ruling parties attempted to induce immigrants from Muslim lands to adopt a more Westernized, European and Ashkenazic culture are religion.

Rav Ovadia’s defiance of Ashkenazic hegemony began even in his early years as a rabbinical court judge. He permitted instances of levirate marriage — an ancient Jewish institution that has not been observed in Ashkenazic Jewry for a thousand years — against explicit directives of an Ashkenazi-dominated chief rabbinate. His most defiant act may have been disregarding the orders of Rabbi Eliezer Menachem Shach, the leader of Ashkenazic ultra-Orthodoxy and an early sponsor of Shas who felt that Mizrahim were not yet fit for political leadership, and instructing the party to join the Yitzchak Rabin-led government in 1992.

In his oral discourses, he remained the product of Jerusalem’s poor Bukharian quarter. His statements in these contexts were often tinged with name-calling and sweeping statements about entire social and ethnic groups. Yet this too was an act of defiance, a maddening refusal to adapt to the norms of “civilized” discourse.

Over time he became more than a restorer of Mizrahi pride but a living symbol of it. No wonder the man who “restored the crown to its former glory” was given a funeral fit for a king.

Elli Fischer, a frequent contributor, is a writer and Hebrew-English translator in Israel.