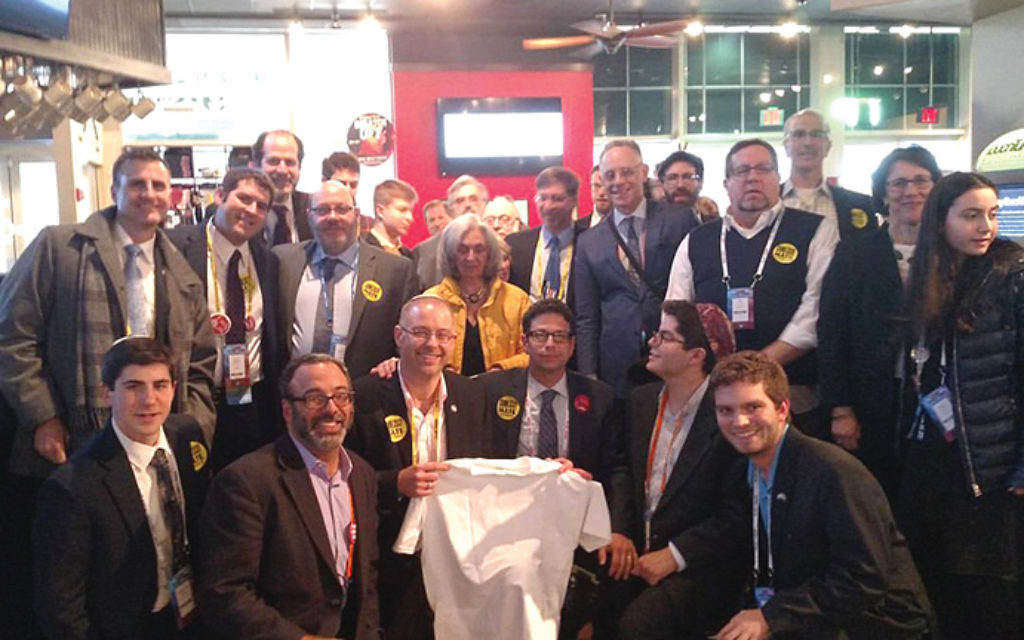 A South Florida rabbi must leave his pulpit after his protest of Donald Trump’s speech at the annual American Israel Public Affairs Committee conference riled congregants.

David Paskin, who serves as rabbi of the Conservative Temple Beth David synagogue in Palm Beach Gardens, will leave his position in July. In March, Rabbi Paskin was one of a group of Conservative rabbis who led a protest of Trump’s speech at the annual conference of AIPAC, the Israel lobby.

Some two months later, Rabbi Paskin’s contract was not renewed.

Trump was in the midst of a campaign for the Republican presidential nod at the time of the conference; he is now the presumptive nominee.

Temple Beth David denied that Rabbi Paskin’s Trump protest cost him his job. Its executive director, Steve Bogad, called the parting a “mutual decision.” Rabbi Paskin also used the word “mutual” to describe his departure, and said the synagogue did not tell him the decision was due to his protest.

But he told JTA he had no idea about the decision before the AIPAC conference and described it as unexpected.

A congregant with knowledge of the matter told JTA that the Trump protest factored into the synagogue board’s decision not to renew Rabbi Paskin’s contract. Two congregants told JTA that synagogue members were upset that Paskin led the walkout and that the protest was so public.

“I had no indication that we were going to separate before the Trump activism,” the rabbi told JTA. “Did I ever imagine that the normal tension that exists from time to time between congregation and clergy, did I ever imagine those would lead to a separation? I did not.”

Rabbi Paskin, along with Rabbis Menachem Creditor and Jesse Olitzky, led the protest of Trump at the start of his March 21 speech at the Verizon Center in Washington, D.C. Some 300 attendees walked out of the arena during the event. The three rabbis’ contingent numbered about 60 of those. AIPAC leadership later apologized for the enthusiastic response of many of the 18,000 remaining audience members to Trump’s criticism of President Barack Obama.

On March 25, four days after Trump’s speech, Rabbi Paskin wrote an open letter to his community on Facebook explaining the reasons for his protest and acknowledging the “turmoil” it caused in the community.

“My family has been threatened and, yes, many at Temple Beth David have been unsettled by my choice to participate,” he wrote, adding later, “I am sorry that my actions have caused pain amongst some in our community. I hope we have a chance to share together in a respectful dialogue. I promise to respect your opinions and choices. I only ask that you do the same for me.”

Paskin told JTA he felt a duty to speak out. He said he will continue publicly opposing Trump.

“I don’t pull any punches,” he said. “I’m pretty transparent about what I feel and what I think. Could I have been more delicate? I’m sure I could have been. I speak my heart, and I heard a call and an obligation to speak out, and I took that. I acted on my values and I don’t regret that.”

Other rabbis who protested Trump at the conference have not experienced professional difficulties as a result. Rabbi Creditor, who has publicly supported President Barack Obama in the past, is a vocal advocate on behalf of Israel and against gun violence. He said his activism doesn’t get in the way of his pulpit duties at Congregation Netivot Shalom in Berkeley, Calif., because he makes sure to build relationships with congregants who may disagree with him and aims to create a climate of pluralism.

Other rabbis who generally remain apolitical saw Trump as a special case whose positions necessitated the protests.

“The goal of our congregation is to be a big tent, to welcome in everybody who walks through our doors,” said Rabbi Olitzky, spiritual leader of Congregation Beth El in South Orange, N.J. “I hope that every Jewish community stands for something. If people don’t feel welcome because we take a stand against bigotry, misogyny, hate, then we’re prepared to take that stand.”