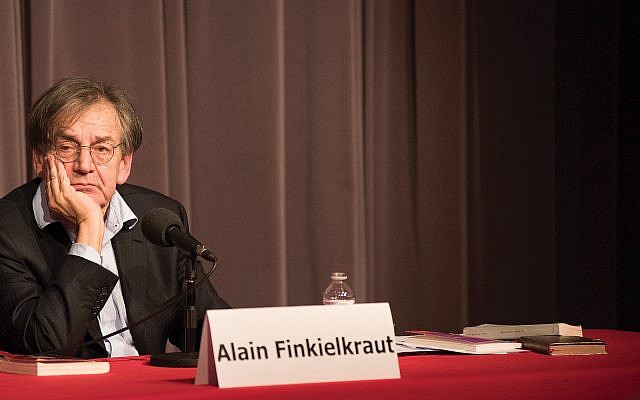 Alain Finkielkraut preparing to answer a question at a 2016 appearance in Brussels, Belgium. Cnaan Liphshiz

JTA  Paris — As a French celebrity philosopher, Alain Finkielkraut belongs to a tiny group of VIPs who get to lead normal, paparazzi-free lives despite having film star-like recognizability here.

Unlike most countries, France makes celebrities out of intellectual heroes. They’re revered, quoted and featured regularly on primetime television and even in film.

But unlike many celebrities, intellectual stars are spared the spying and harassment from the media and over-eager fans. French VIP thinkers have enjoyed the best of both worlds since before the 1930s, when the likes of Jean-Paul Sartre and Pablo Picasso could be seen rubbing shoulders with ordinary Parisians at Café de Flore in the Latin Quarter here.

For Finkielkraut, though, this privileged existence has become increasingly difficult because he is a Jewish supporter of Israel.

Amid growing anti-Semitism and social unrest in France, Finkielkraut, a best-selling author and retired university history professor at the prestigious École Polytechnique in Paris, has been accosted repeatedly by street protesters in violation of the law and the unwritten pact between French society and its brightest minds.

“I can no longer show my face on the street,” Finkielkraut, 69, told the magazine Marianne in April after protesters nearly prevented him from speaking at a Paris university. His lecture was announced as canceled — but it actually was moved in a cat-and-mouse game designed to throw off far-left demonstrators.

While Finkielkraut is reviled in some far-right circles for his Jewishness and pro-establishment sentiments, he has become increasingly reviled by the radical left for his criticism of political Islam and support for Israel (but not its control of the Palestinians: Finkielkraut is a founder of the dovish European Jewish J Call group styled after J Street).

In 2016, amid booing and calls accusing him of fascism, Finkielkraut and his wife were chased away from a pro-labor protest against government austerity policies.

But that incident paled in comparison to what happened in February, when marchers from the populist yellow vests protest movement spotted him on a street near his home on Boulevard du Montparnasse in the heart of this capital city.

“I was curious to see the procession, so I came outside,” he said during a recent talk before members of the CRIF umbrella group of French Jews. “I was shocked by how quickly I was recognized.”

The encounter, which was filmed and widely shown in the media, was brief but violent. Finkielkraut, a tall, soft-spoken and at times self-effacing man sporting a trademark disheveled haircut, is seen standing silently as men approach him to hurl insults while dozens boo in the background.

“F*** off, you dirty piece of shit Zionist,” one man hollers, adding an obscenity about Finkielkraut’s late mother, a Holocaust survivor from Poland. As police usher Finkielkraut to safety, more men and women converge on him, screaming about Palestine, Zionism — and his mother.

One of the accosters then points to his own scarf, a kaffiyeh, or Palestinian shawl, shouting: “France belongs to us! You racist! You hater! You’re going to die!”

At the CRIF talk, Finkielkraut said the video is more dramatic than how he experienced the exchange.

“I’ve been commended for my dignified demeanor during this exchange, but I’m afraid that’s only an interpretation of my attempt to understand what these people were shouting,” he said.

The French public reacted with shock and disgust to the incident, which was a flagrant violation of the unwritten code of conduct vis-à-vis a celebrity philosopher. (It was ironic considering that Finkielkraut had spoken out in favor of the yellow vests movement.) It received front-page coverage and uniform condemnations — even from sworn enemies of Finkielkraut.

Among them was Jean-Luc Melenchon, a far-left populist with many supporters from the anti-establishment yellow vests. Melenchon, whose party has faced repeated accusations of anti-Semitism – including by Finkielkraut — called a special news conference over the incident.

“His detestable opinions notwithstanding, in that incident not his opinions were attacked. It was denying his humanity,” Melenchon said of the philosopher.

The incident prompted an indictment for racist offensive discourse against the man who had said that Finkielkraut was “going to die,” a 36-year-old convert to Islam named Benjamin Weller.

Nothing about the incident suggests that France is an anti-Semitic country, Finkielkraut said at the CRIF talk.

“On the contrary, as the response to this incident demonstrates the opposite,” he said. What it does show, though, is that “the historical role of anti-Zionism is to install anti-Semitism as a form of anti-racism,” he said.

He also interpreted Weller’s assertion about whom France belongs to as a claim that “France belongs to Islam — not to the French, not at all. And I have no place there. This is anti-Semitic violence that is new, that echoes other modalities of anti-Semitism.”

Finkielkraut has positioned himself at the forefront of those warning against a rise in violent anti-Semitism in France and creeping tolerance of it. In 2017, he joined other intellectuals in an open letter alleging a “denial of reality” by authorities and the media. It followed the relative silence about the murder of a Jewish woman by her anti-Semitic Muslim neighbor.

(In April, he signed on to another letter wondering whether “psychiatry is the new tool for denying reality” over the unusual decision of the judge presiding over that case to signal his support for the defendant’s insanity plea.)

Such pessimistic questions are typical of Finkielkraut.

During a now-famous private exchange in 2014, Natan Sharansky, the former refusnik and one-time chairman of the Jewish Agency for Israel, asked Finkielkraut whether “European Judaism has a future in Europe.”

Finkielkraut replied with his own question: “Does Europe have a future in Europe?” Sharansky said the comeback showed “pessimism much deeper than mine.”

Some consternation over the incident involving Weller and Finkielkraut had little to do with Jews.

In a country where a jihadist in 2015 murdered 16 people at the Charlie Hebdo satirical magazine, the intimidation of a writer on the street seemed to many like a dangerous transgression.

Bernard Henri-Levy, another Jewish, centrist French philosopher, is often assigned police protection these days. But then Levy by his own admission is no stranger to brawling.

The attacks on Finkielkraut, by contrast, were particularly shocking because of the juxtaposition between their vulgarity and his own meek demeanor and literary genius.

A prolific and innovative writer of essays and books about everything from cultural identity to nuance in art, Finkielkraut was admitted in 2009 to the Legion of Honor — his country’s highest recognition. In 2014, he received the ultimate honor for an academic when he was named a member of the Academie Francaise, a council of 40 greats elected for life.

Bearing such accolades, his admission to the Academie alarmed and infuriated some critics, including Pierre Nora, a left-of-center fellow historian, also Jewish, who accused Finkielkraut of “provocative simplicity” in Nora’s letter welcoming Finkielkraut to the forum.

Nora’s criticism notwithstanding, Finkielkraut is an enemy of far-right populism: In 2017 he called Bruno Gollnisch, a European Parliament lawmaker for the National Rally party of Marine Le Pen, a successor of French Nazi collaborationists.

But some left-wing critics – including protest leader Frédéric Lordon, who in 2016 called Finkielkraut “perhaps the most notorious propagator of capitalist and identity-driven, racist violence” – resent Finkielkraut’s speaking out early on about the perceived failures and excesses of liberal multiculturalism.

In 2005, Finkielkraut was one of the first well-known thinkers to address what he called the “ethnic and religious dimension” of rioting in heavily Muslim French neighborhoods – a taboo at that time.

In April this year, Finkielkraut said that the “integration of immigrants has clearly failed” in France because last year, 18 percent of newborn babies were given Muslim names.

“The first gesture toward integration is a French first name,” he opined. “And a name dignifying a different identity is separatist.”

It’s a common mainstream sentiment in France, where much of the country’s founding ethos seems to revolve around a secular and unhyphenated French identity.

But here, Finkielkraut was speaking out of his family’s own experience as integration-seeking immigrants. He often juxtaposes that story with the sectarianism of many French Muslims.

His parents, Daniel and Janka, fled their native Poland in the 1930s for France. In 1941, Daniel, a bag maker, was betrayed by a neighbor in Paris, arrested by French officers working for the Germans and sent to Auschwitz, which he survived. Janka survived in hiding. Both their nuclear families were all murdered in the Holocaust.

So when Alain was born in 1949, his parents commemorated their fathers in the distinctly French name of their only child, the philosopher said during the CRIF talk.

“But naming me Aharon-Lazar Finkielkraut would’ve been a bit too much of a good thing,” he said, drawing laughs.

Finkielkraut said his parents were “angry, the fury was there” for the betrayal they had experienced by France.

“But they gave me a French first and middle name: Alain for Aharon and Luc for Lazar,” he said.