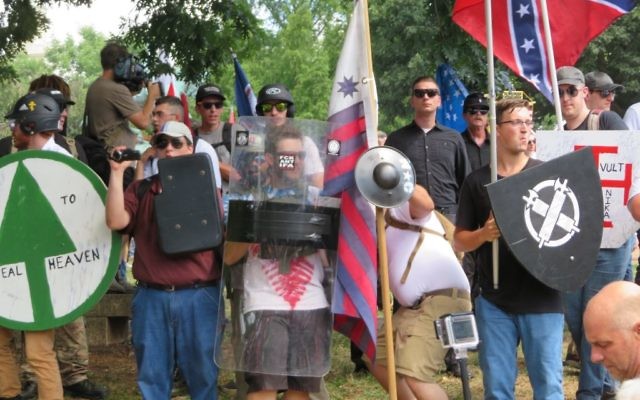 A synagogue under threat on Shabbat from armed Jew-haters. Pleas for police protection ignored. Frightened worshippers on Shabbat morning urged to leave in groups through the back door following services. Torahs removed as a precautionary step, and a Havdalah service canceled for fear of inviting violence.

The chilling eye-witness account is not by the head of a European congregation in the 1930s or ’40s, but from Alan Zimmerman, president of Congregation Beth Israel, a Reform temple in Charlottesville, Va., written the weekend of the tragic violence earlier this month. Posted on ReformJudaism.org, it is a deeply disturbing report. Zimmerman wrote that “several times [on Shabbat morning], parades of Nazis passed our building, shouting “There’s the synagogue!” followed by chants of ‘Seig Heil’ and other anti-Semitic language.”

For 30 minutes that morning, he stood outside with an armed security guard hired by the congregation, “after the police department refused to provide us with an officer,” and wondered what he would do if the three men across the street “dressed in fatigues and armed with semi-automatic rifles” chose to enter the synagogue. Fortunately, they did not.

He later learned that “Nazi websites had posted a call to burn our synagogue … . This is 2017 in the United States of America,” Zimmerman wrote.

He also pointed out, though, that several non-Jews came to the well-attended services on Friday evening and Shabbat morning in solidarity with the Jewish community and “at least a dozen complete strangers stopped by as we stood in front of the synagogue Saturday to ask if we wanted them to stand with us.”

In the end, Zimmerman believes the congregation will be strengthened from the harrowing experience, but “the fact that a calamity did not befall the Jewish community of Charlottesville … was not thanks to our politicians, our police, or even our own efforts, but to the grace of God.”

The question is not whether President Trump is a racist or anti-Semite. It’s how he can tolerate, if not encourage, those haters who threaten a Jewish community that includes his own grandchildren.

In the aftermath of the Charlottesville violence, President Trump’s insistence on equating the actions of the alt-right neo-Nazis, racists and bigots with the counterprotesters revealed a political and moral failure on his part that continues to reverberate. A wide range of Jewish activists and leaders have called out the president for his unwillingness to at least rhetorically protect those minorities, including Jews, targeted by racists and haters. (That includes, to their credit, the professional and lay heads of the Rabbinical Council of America, which, unlike most Orthodox groups, specifically made reference to President Trump in calling on him “to understand the critical consequences of his words.”)

Perhaps most dramatically, 11 former White House Jewish liaisons — from the Reagan, Clinton, Bush and Obama administrations — wrote a letter to Trump this week asserting that he “neither understands his responsibilities nor the nature of the ancient hatred of anti-Semitism and other forms of hate.” The letter said that “in his failure he exposes not just Jews but all Americans to greater danger.”

The former officials — there is no liaison to the Jewish community in the Trump White House — issued an ultimatum to the president, urging him to “demonstrate moral leadership” by speaking out strongly and unreservedly against racism, anti-Semitism and hate — “and to resign” if he failed to do so.

Strong sentiment from an influential group whose members have served in Democratic and Republican administrations and reflected the views of American Jewry over the last four decades. For all of their political differences, they speak with one voice in warning that it is beyond unacceptable for American Jews in the 21st century to confront ancient forms of prejudice and new levels of insecurity.

The fears and concerns exacerbated by a new boldness among racists and bigots, combined with the president’s blind spots on moral behavior and statesmanship, indicate a major step backward on the path toward national unity. The question is not whether President Trump is a racist or anti-Semite. It’s how he can tolerate, if not encourage, those haters who threaten a Jewish community that includes his own grandchildren.