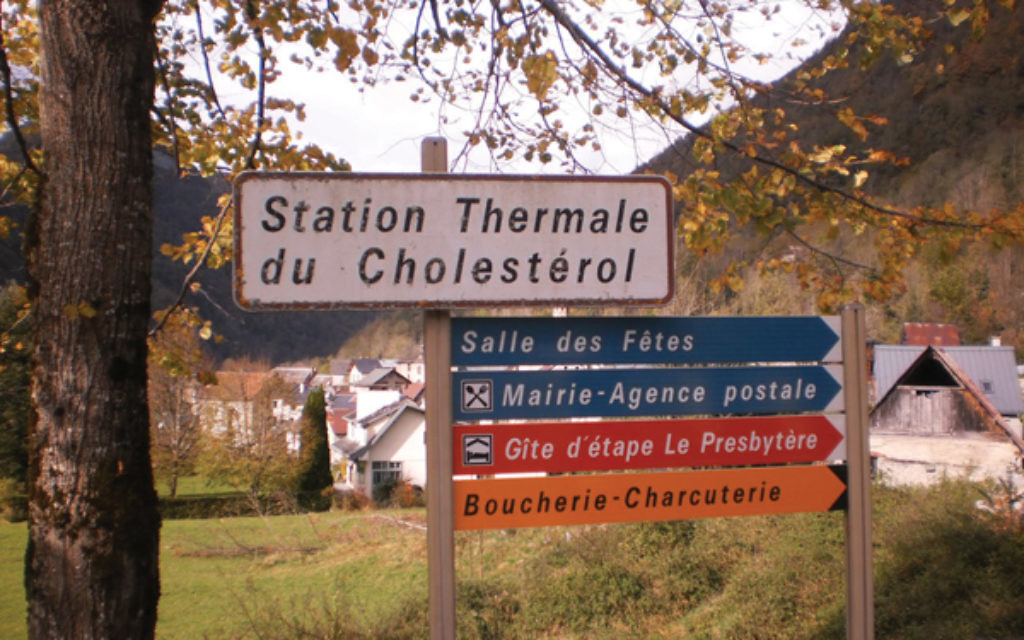 ‘Are you a big-city girl?” our burly host, Jean-Michel, inquired over breakfast in a centuries-old bishop’s palace he had bought from a friend and converted into a bed-and-breakfast in St. Lizier, one of the oldest, loveliest villages of the Ariège, in southern France. My husband and I were following a dream trail from Barcelona, through Catalunya, the country of medieval Jewish mystics, across the Pyrenees and to the land of the Cathars.

I replied that, yes, I may have come to the Pyrenees to escape the strains of urban life but that I’m a New Yorker.

“I’m from a place even smaller than this, about 35 kilometers from here, called Aulus, said Jean-Michel. “My mother still lives there.”

From my question about whether there was animal rennet in the huge brown fragrant cheese he brought to the table, it must have been apparent that we were observant Jews; he replied that he did not know. The locals put in their traditional ingredients and produced the superb fare as they always had. We ended up eating bread and locally produced jam, drinking infusions of the natural herbs produced in the area.

Our host then told us of a Jewish friend, Izzy, who lived part time in the States and partly in Paris but regularly came to visit, particularly with his mother, every year. “He lived in our village,” Jean-Michel said. “Many Jews did during the war. A Jewish family was billeted with my grandmother. Really good people, she always said. “Very intelligent. And educated. They never returned.”

Aside from the dairy products of the shepherds of the area, Aulus-les-Bains, once known for its bear trainers, was already famous in Roman times for the medicinal properties of the minerals in its four springs. Over time it came to specialize in treatment of high cholesterol, diabetes, and metabolic malfunctions. Many large hotels that flourished in the 19th century were largely vacant during the Great Depression. Unfortunately, they presented an ideal place to concentrate Jews of southern France as well as “foreign” Jews from central Europe, with even a few from the east. From the town’s 400 original inhabitants, the village population almost tripled with the arrival of people with entirely different lifestyles.

At first the Aulusiens could not understand why all available hotel space had been requisitioned by the authorities and there would be no “season” that year. Remarkably, despite the anti-Semitic propaganda from the national radio, once they became acquainted with the Jewish arrivals, they got along with them. It didn’t hurt that the Jews provided a little extra income and employment, and for the detainees, it certainly helped to have fresh eggs, milk, and butter, mushrooms, trout, and greens at very reasonable prices.

“Some of them were wealthy,” Jean-Michel continued. “One family drove in from Antwerp in a Rolls-Royce, full of diamonds. All that disappeared. We don’t know where. As for the family, they never returned.” To remember all this, he felt, was very important.

In the first rafle, or raid, by the French gendarmes on Aug. 26, 1942, 226 foreign Jews were deported to the camp of Vernet, and from there to Drancy and Auschwitz; clearly an enforced stay at a spa or a hotel that may have been luxurious under other circumstances could become a deathtrap. One survivor who was a child at the time called his time at Aulus a “respite.” But after the raids, villagers and inmates were under no illusions. On the day of the raid, the town’s mayor, Auguste Calvet, who owned two of the hotels, told his guests to vacate, and locals helped them hide.

“But no more of these horrors,” said Jean-Michel, “Go enjoy yourselves! There is a superb market in St. Girons.” But at our earliest opportunity, and without planning to, we found ourselves a day or two later in Aulus-les-Bains.

Nestled in the Garbet valley at an altitude of about 2,500 feet, the village is embraced by majestic mountains blanketed with pine and rising over deep cols with lush, brilliant green meadows. Already as we drove there, the scenery changed, becoming wilder and more beautiful with every bend in the road. It became clear why Vichy chose to plant its ghetto there. Aulus’ isolation at the most remote end of the Couserans region, separated from Spain’s Val de Cardos by a six-mile mountain wall, made it a natural prison, easily monitored by a single sentry from an outpost on the one road between the village and St. Girons, and the police blocked all access to the valley. For all but the fittest, unacquainted with the trails and ill equipped for extremes in the weather, Aulus was almost impossible to escape. Yet escape across the mountain frontier to Spain and Andorra was the Jews’ only hope. This perilous journey was undertaken by the intrepid few with the help of local guides, or passeurs, some of whom took a fee, while others led them out without remuneration and at risk to their lives. One woman, Jeanne Rogalle, whose father and fiancé were passeurs, and who received the Legion d’Honneur and the medal of the Righteous of Yad Vashem, explained that she wanted to fight the Nazis not only because her brother had been captured, but also because of the terrible suffering she saw. More than 100 passeurs were arrested and deported.

After the Free Zone was invaded by the Germans in November 1942, entire networks of escape routes were opened by the Resistance to get French partisans, Jews, and downed Allied pilots across the Pyrenees. In all, about 33,000 individuals succeeded in making that break for freedom, of whom 782 crossed the peaks of the Ariege. What for us are picturesque mountain trails were then nothing less than lifelines. These are commemorated today by walking itineraries (http://chemindelaliberte.fr/les-steles-de-l-itineraire).

The village, we noticed, is divided — half of it the original Roman village, with clusters of modest stone houses around a church, from which begin the escape routes; across the way, in the lower part of the village near the baths, are the splendid spa hotels, whose exteriors still shed an ambience of fin de siècle glamour, with names like Hotel Majestic, Le Grand Hotel, Hotel de France, and Hotel Beauséjour, which no longer receive guests. Nearest accommodations are to be had at Residence Les 3 Césars.

From the hotels, we moved on to the monument listing the names of the 640 Jews who had lived there, and the victims who had perished. Though plaques were erected in their memory in the 1990s by the Swiss Red Cross, a memorial of gray granite was unveiled as recently as 2008, telling the story of what had occurred.

Today, Aulus is both a spa and an adjunct to the ski station of Guzet-Neige. We ourselves hiked to the nearby Cascade d’Ars, which was the first lap of one of the escape routes, and picnicked in the sublime setting. ✦