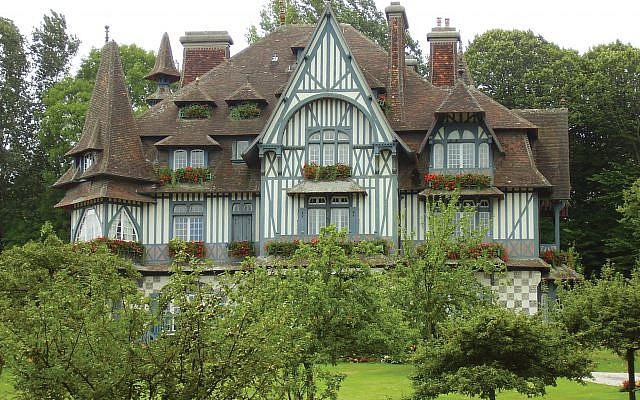 The Villa Strassburger, the Rothschild estate in Deauville. Wikimedia Commons

Life is a perpetual holiday on the French Atlantic Coast at Deauville, where the Rothschilds once sunbathed, Yves Saint-Laurent vacationed and James Bond gambled in “Casino Royale.”

The Parisian Riviera, as it is sometimes called, has been an upscale summer resort since the 19th century, when Gallic aristocrats escaped the city for Normandy’s ocean breezes.

The palm-fringed, sun-baked Mediterranean has long since eclipsed France’s Atlantic Coast in popularity. But the region has returned to the spotlight this summer as Normandy commemorates the 75th anniversary of the June 1944 D-Day invasion by Allied forces during World War II.

Jewish travelers, meanwhile, are discovering a French resort with an improbable overlay of Yiddishkeit. How many European towns with a population of not quite 4,000 can boast — as Deauville does — multiple kosher eateries, a Chabad Center, a Rothschild villa and the resulting company of fellow Jewish vacationers?

Such amenities, along with abundant seaside charm, earn Deauville and the surrounding “Côte Fleurie” (“Flower Coast”) a spot on any France itinerary. The city lies about two and a half hours northwest of Paris, accessible by highway or train. It was in fact the latter — an 1860s rail line from Paris to neighboring Trouville — that sparked an initial development frenzy along these sandy shores.

White stucco manses set behind thick green hedges, sprawling lawns used for horseback riding and croquet, grand hotels with water-view terraces: All are a legacy of that fin-de-siécle heyday, when affluent Parisians claimed the coast as a summer colony.

Deauville was a glamorous destination throughout the first half of the 20th century (in F. Scott Fitzgerald’s “The Great Gatsby,” Tom and Daisy Buchanan honeymooned here). Largely spared by World War I, Deauville saw its villas occupied by Germans during the Nazi era.

By the 1960s, modern transportation had made France’s southern coast a more attractive option, and Deauville became simultaneously quieter and more middle class. Yet the restrained color palette, moody skies and wide, flat landscapes can be oddly reminiscent of another Atlantic resort — the Hamptons.

Even at summer’s peak, Normandy is never hot. The same June temperatures that greeted D-Day soldiers — 60s, with a likelihood of drizzle — make it extremely pleasant to stroll Deauville’s historic center, with its winding lanes and dark-green thickets. The iconic boardwalk, Les Planches, stretches several miles along the beach, where the sun is warm but the water delightfully shivery.

The harbor at Deauville is lined with vintage façades, and filled with bobbing sailboats. Across La Touques, a river that flows northward into the English Channel, lies neighboring Trouville, a destination known for its lavish, Art Nouveau casino and lively waterfront scene.

Normandy has had a Jewish presence for a millennium; even today, the region’s modest cities boast outsized Jewish life, with numerous synagogues and Chabad centers. Deauville itself has several kosher restaurants, including at least two on Avenue de la République: Motikouty, a meat establishment; and the Akhotel and Ak Resto Halavi, a hotel and Italian restaurant, both in a rustic mansion with the wood-beamed rooms typical of northern France.

Aside from its beaches and history, Deauville’s main claim to fame is equine. Normandy is the Kentucky of France; its horse farms are ground zero for European thoroughbred racing. The August Deauville yearling auction is a highlight of the social calendar, as are the summer and winter horse races held on some of Europe’s most storied tracks.

A century ago, one of the most ardent equestrians was Baron Henri de Rothschild, a member of the French Jewish banking family. For the baron, Deauville was a getaway where he could indulge his passion for both horses and the French countryside.

Rothschild’s estate — known as Villa Strassburger, for the American tycoon who later purchased it — is a Deauville landmark. Visible across sloping lawns on Avenue Strassburger, the Villa is a castle-like fantasy with a half-timbered, partly checkered façade that looks like nothing so much as a dollhouse.

Once summer wanes, attention turns to the American Film Festival, a 45-year-old event that turns Deauville into a kind of Cannes North for 10 days in September. Chic crowds stroll Les Planches by twilight, and linger on terraces over bottles of the local Calvados brandy (named for the French department where Deauville is located).

Golden afternoons heat up into glittery nighttime galas. And for a few weeks, while Parisians and New Yorkers settle back into school-year routines, Deauville glories in the high-powered spotlight where it has always felt most at home.