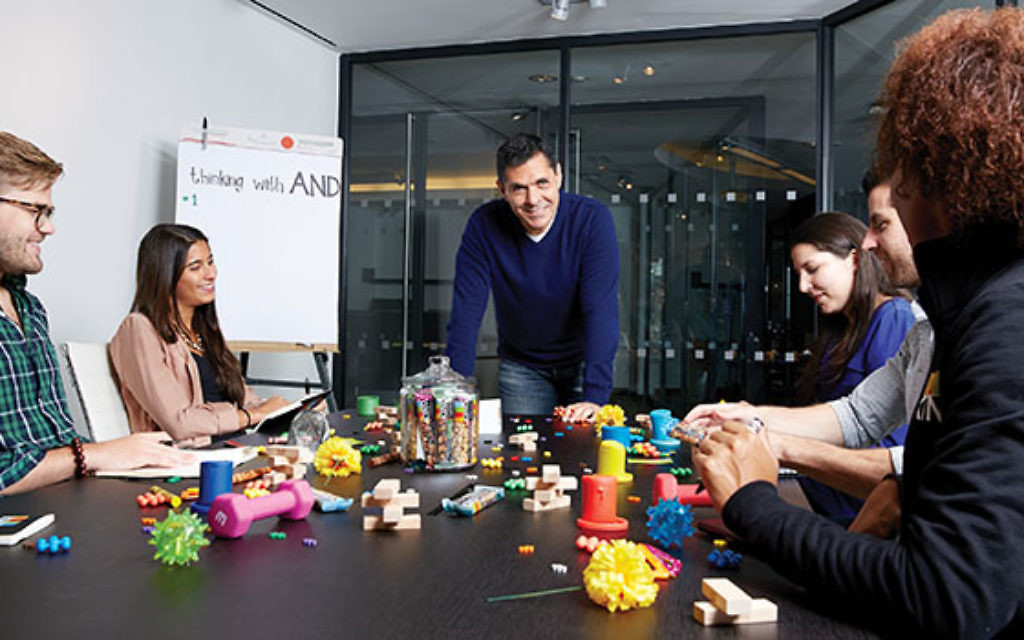 Today, you’d be hard-pressed to find a grocery store or gas station depot that doesn’t stock KIND snack bars, the wholesome to-go treats that boast whole nuts and fruit behind their transparent wrappers.

But the company — which has sold more than 1 billion bars over the past decade, with sales doubling each year — comes from humble beginnings. As Sukkot, the traditional Jewish celebration of the harvest, rolls around, founder and CEO of KIND Healthy Snacks reflected on the company’s journey, from the seeds of inspiration to reaping the fruits (and nuts) of his labor.

“When you’re bringing an idea to fruition, there are two distinct phases: the skeptic phase, and the evangelist phase,” said Lubetzky, speaking from his office at KIND’s New York headquarters. He sat easily in an armchair, surrounded by the stately wood furniture of his late father, a Holocaust survivor, and pictures of his children decorating the walls. “During the first phase, you have to be willing to ask the hardest questions — is this idea worth pursuing. But once you are convinced, you flip a switch. It’s about getting it done.”

Getting-it-done is Lubetzky’s strong suit. Far from an overnight success, he endured many failures before the company took off in 2010; last year sales of his energy bars topped $1.2 billion. Several news outlets have termed KIND the “fastest-growing brand.”

Still, the road was far from smooth. In 1994, Lubetzky launched his first food company, PeaceWorks, in Israel. The fledging operation, which peddled a sundried tomato paste, was intended to create bridges between Israelis, Palestinians, Turks and Egyptians in the region. The company never took off.

“Tasting failure, even when you truly believe in a project, is a critical part of the growth process,” said Lubetzky, who still views it as his “life mission” to foster peaceful relationships between Arabs and Israelis through business, and through food. He finds the rising tensions in the region deeply troubling, and hopes one day to go back. “I’m never going to give up — it’s part of my lifeblood to help, protect and defend Israel,” he said.

Returning to the States, Lubetzky turned his hand to KIND snacks, launched in 2004. Taking up where he had left off with PeaceWorks, he hoped to create a company with a strong mission of social justice, or a “not just for profit.”

“Market forces are driving our society more than anything else today,” he said, “I wanted to tap into the market forces to do something positive.”

Though KIND has cut a sharp profit — the company was valued at $728.5 million in March 2014 by private-equity firm VMG Partners — it has maintained a focus on social action. Kind Causes, a part of what Lubetzky terms the “Kind Movement,” allows laypeople to enter projects and causes on the company’s website. Every month, the company gives $10,000 to the cause that received the most votes. Lubetzky and other company employees give out KIND bar vouchers to those they see doing kind acts on the subway or street.

“Kindness boggles my mind,” said Lubetzky, “it’s the only force in nature that increases simultaneously for the giver and the receiver.”

The one of act of kindness that “started it all” was not done to Lubetzky, but to his father as a 13-year-old in Dachau. While standing on line for roll call, one Nazi soldier saw the young man begin to slump. “He was so weak — his hope for life was fading,” said Lubetzky, who paused several times during the story to swallow back tears. The soldier, in a surprising turn, threw his father a potato. “It was that one act of kindness that kept him going,” said Lubetzky, “If it hadn’t been for that one, small act, he might have lost all faith in humanity.”

Lubetzky grew up in Mexico City, among the families of several other survivors. His first language was Yiddish.

“I didn’t realize Yiddish wasn’t the universal language,” he recalled, laughing at the memory of speaking Yiddish to his Mexican cohorts, only to be surprised when they didn’t understand. “Who doesn’t know that a ‘tuchas’ is — you know what a ‘tuchas’ is, right?”

The memories of his native tongue blur with images of the High Holidays, when he would go with his family to a small synagogue and stand next to his father. “My father taught me about kindness,” he said, “He had the unique ability never to forget, but to lead a life of joy. He was relentless when it came to making others laugh.”

Lubetzky doesn’t consider himself very religious, but rather deeply traditional and spiritual.

“My heritage and Jewish values inspire what I do every day,” he said. A Judaism of “tikkun olam and chesed,” or “repairing the world and kindness” is the one he hopes to impart to his children.

With one of the fastest growing brands, a newly released book, “Do the KIND Thing,” and a rapidly expanding line of products, staying humble is an imperative, he said.

“The secret is simply not to take yourself too seriously,” he said, “I’m not a different person today than the man who peddled door to door for 14 hours a day trying to sell tomato paste.” True, he’s learned a thing or two along the way. But careful self-reflection over the High Holidays reminds him of his weaknesses. “There are always ways to improve, and I just keep reminding myself that I have a responsibility to give back.”

Towards the end of the interview, Lubetzky’s son shyly entered the office, and then jumped onto his dad’s lap and started messing with his hair. “Nanny confusion,” Lubetzky mouthed to me apologetically. As his son continued to bounce up and down, eyeing me curiously, he added, “Oh, and one more thing — kids keep you humble. If you ever start taking yourself too seriously, they’ll remind you who you are.”