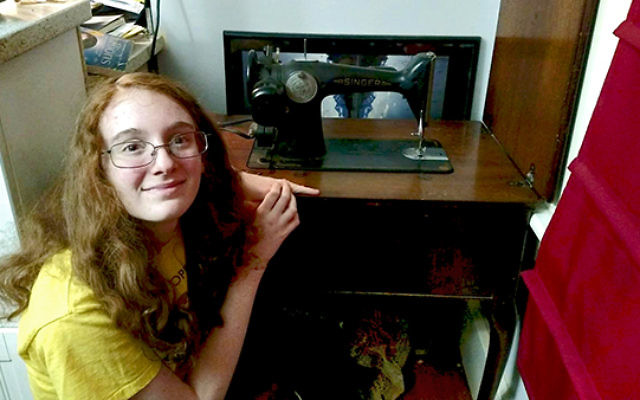 A family treasure: The author with her great-grandmother's manual sewing machine.

Sewing is a big part of my life. Like my Jewish heritage, it’s who I am and what makes me, me. I’m a senior in high school and ever since I was in elementary school, I have been fascinated by crafts like sewing. Sewing has been passed down on my mother’s side, the same way as Judaism. Not only has the hobby been passed down, but so has a machine: my great-grandmother’s sewing machine. My great-grandma used the machine to make clothes when she came to America before the Holocaust. It doesn’t run on electricity, but instead has a foot pedal to manually move the needle up and down. Since the machine has meant so much to our family, we haven’t sold it. In a way, the machine connects me to my family’s past and to my Jewish heritage. I consider the machine to be a part of our identity, justifying my love for sewing.

When I was in second grade, my grandmother showed me her sewing machine and made a simple doll for me to color. Since I was very young and my grandmother didn’t want me to get hurt, she waited until I was a few years older to give me a needle. The first thing I ever sewed by hand was a small cat head. After my grandma helped me complete the project, I carried around the plush animal everywhere. When I reached middle school, I started to buy different sewing books and started to sew felt by hand. I ended up making a small, green alien with beads on his head; a bunny with his hands in his pockets; and a little pirate mouse with an eye patch. (Photo: Hannah with her one-of-a-kind video game dolls.)

The more I started to sew, the more I wanted to make my own patterns. I joined the felting club in school. I made my first doll from my imagination and named her Kaneena. Since I would assign personalities to my dolls, I gave Kaneena characteristics that I would want: she was strong, brave and smart. I gave her long, red yarn hair and two tattoos: a heart on her arm and a crudely made Star of David on her back. I carried her around everywhere and brought her to school and family gatherings on Chanukah and Passover. I would sit her in my lap and pretend that I was not reading the prayers and the Four Questions to my family, but to Kaneena. My grandma went shopping for clothing patterns for Kaneena (they were designed for Barbie dolls). She showed me how to make clothing on her sewing machine and helped me make a dress, a shawl, a shirt and pants for Kaneena. She even put snaps on the clothes so they wouldn’t slide off. Whenever I would bring her to holiday gatherings, I could show off her nice dress and shawl.

As the years went by, I started to improve my skills but realized I could only go so far sewing by hand. My grandma tried to teach me how to use her machine, but I ended up getting too frustrated threading it. I wasn’t able to sew on my great-grandmother’s machine either even though I appreciated the machine’s history and how it works. I decided to invest in my own sewing machine. Using all of my Chanukah money, I bought a beginner’s model that has over 20 types of stitches and four different sewing machine feet.

I like to improve my sewing skills as much as possible. Instead of coming up with my own ideas, though, I take characters from video games and bring them to life. While this may not be the most original idea, it does help improve my skills. When I show the dolls to my friends who play video games, they immediately recognize who it is. My favorite video games on which to base characters are “Team Fortress 2,” “Minecraft,” “Portal,” the “Five Nights at Freddy’s” series and “SCP-Containment Breach.” I also make pillows for my friends and sew rips in clothing. For my best friend’s birthday, I made her a pillow that combined different patterns of fabric that reminded me of her.  I even found the perfect design: a fabric piece with the Star of David in gold and blue! She loved it and sleeps with it next to her every night. (Photo: Her best friend's beloved pillow.)

Like Judaism, sewing is a big part of my life. I hope that when I have children, I can pass down this skill the same way I am going to pass down my heritage. Not only will I pass down the tradition of saying the prayer before eating challah, dipping apples in honey and throwing bread crumbs into the river, but I will also pass down sewing so my children can learn about a tradition that existed before my family came to America. I want my children to know Passover’s Four Questions as well as they know how to do a running stitch.