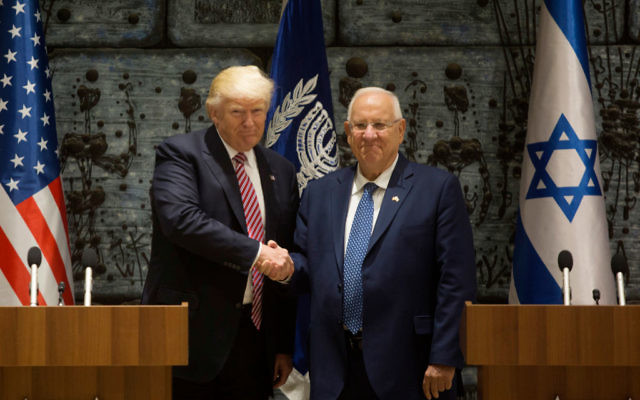 JERUSALEM, ISRAEL - MAY 22: (ISRAEL OUT) US President Donald Trump (L) shakes hands with Israel's President Reuven Rivlin during a visit to the President's House on May 22, 2017 in Jerusalem, Israel. Trump arrived for a 28-hour visit to Israel and the Palestinian Authority areas on his first foreign trip since taking office in January. (Photo by Lior Mizrahi/Getty Images)

A key ingredient to the relative success of Donald Trump’s first foreign visit in office could be described as intentional amnesia, a condition that appeared to render the president as well as the leaders of Saudi Arabia, Israel (and presumably the Vatican, later this week) without memory of some of the most highly charged, critical comments or pledges the commander in chief has made in the last year.

The same Trump who called Islam an “evil” religion and held Saudi Arabia accountable for the 9/11 attack signed a $110 billion arms deal with the House of Saud last weekend. The same leader who called for a ban on Muslims in the U.S. was given a gushing, royal Riyadh reception.

Apparently, one of the unique perks Trump enjoys is not being held accountable for what he says or does.

In the last year he called the Iran nuclear agreement “the worst deal” ever” and promised to “tear it up” on taking office. He pledged to move the U.S. Embassy in Israel from Tel Aviv to Jerusalem, asserting “I’m not a person who breaks promises.” And he spoke in support of West Bank settlements while suggesting that a two-state solution may not be a goal of his administration.

All that’s gone now, or at least on hold for the foreseeable future, and there’s been no explanation for the reversals. What’s more, despite his good friend Benjamin Netanyahu’s long-time efforts to downgrade the Israeli-Palestinian conflict, insisting that it isn’t the key to Mideast peace, Trump has now done just the opposite. This week he repeatedly described the Jerusalem-Ramallah struggle as the vital first step toward a wider agreement between Israel and the Arab Sunni states.

Prime Minister Netanyahu, who has praised Trump in glowing terms, has now been put on the defensive by his great friend in the White House.

How is it that despite all this dramatic backpedaling on Trump’s part -– and the disturbing reports that he leaked top-secret Israeli intelligence to the Russians, sure to be shared with their friends in Tehran — the president’s visit was still seen in Israel as an event to be celebrated?

That’s largely because Trump’s primary asset, when it comes to foreign policy, is that he’s not Barack Obama. The former president’s tilt toward Iran, from the outset of his first term, was the original sin for Saudis and Israelis alike, along with Egypt, Jordan and key Gulf states.

That diplomatic outreach by Obama to bring Tehran back into the international community caused the anti-Iranian leaders in the region to make common cause, at least to some degree and under the radar. Israel and some of its Arab neighbors were joined in opposition to the nuclear deal and in their deep disappointment with, and sense of betrayal by, the White House.

Trump is banking on parlaying their gratitude for his having restored Iran to its proper place as an enemy — not a potential ally, of the U.S., Israel and much of the region — into a productive and public understanding between and among them. An additional motivation for states seeking to improve their relationship with the U.S. is the realization that the president is powerful, volatile and vindictive.

Could it work? Perhaps it’s an advantage that Trump starts with a clean slate — or perhaps a blank one, given his comment on his arrival in Israel from Saudi Arabia that he had just returned “from the Middle East.” But given the long track record of U.S. failure on the Mideast peace front, and the sense that neither Netanyahu nor Palestinian Authority President Mahmoud Abbas seems willing or able to make the kinds of concessions that could significantly close the diplomatic gap, its widely believed that the best we could realistically hope for now is a tamping down of the tension and an effort to take incremental steps on the long road toward the prospect of a real peace.

Trump’s first foray into the Mideast, with its politics and pitfalls, was long on positive rhetoric and atmospherics but short on detail. The president came away encouraged about making the ultimate deal, but he offered no plan for breaking the deadlock. What’s more, he failed to call out the Saudis for their human rights abuses and support of Wahhabi Islamic terrorism, or publicly pressure the Palestinian leadership to cease its consistent portrayal of Jews as the devil.

In fact, so far Trump’s Mideast policy — at least on the Iran nuclear deal, settlement building and the U.S. embassy — looks an awfully like that of President Obama’s, the man he vilified for weakness.

After the smiles and handshakes and hoopla of the Trump visit, we’ll see if the shift to transactional deal-making produces results. Ironically, for the moment, the pressure is back on Israel to make compromises for an elusive peace — at least until amnesia returns.