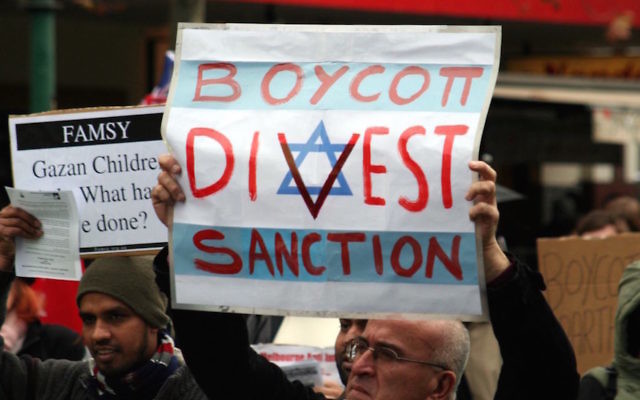 Stephen Hawking, one of the world’s most intelligent scientists, reshaped our vision of the future of scientific discovery. Despite being paralyzed from amyotrophic lateral sclerosis, he managed to overcome his setbacks and became well known across the world. Though some of his theories and proposed hypotheses contradict Jewish belief, such as the lack of existence of God, they are still of genius quality. However, while the critically acclaimed scientist, now unfortunately deceased, was known on an international scale for his incredible accomplishments, there is one point which still remains unknown in the global community and is consistently being refused of recognition—his support of the BDS movement.

The BDS movement, just like Hawking’s concepts and theories, is quickly gaining traction. Although the idea of Hawking’s concepts holds a positive connotation, the movement does not, and it is spreading like a burning fire, ravaging everything in its path while firefighters (the Jews) continue to persevere and work tirelessly to terminate the flames. Teenagers and young adults are hindered by the rising sparks of anti-Semitic views and behaviors of the twenty-first century. For example, professors at the Universtiy of Michigan refused to give references to students who planned to study abroad in Israel. In addition, students such as Lara Alqasem who have supported the BDS movement, are still being granted permission to conduct business in Israel as they please without penalizations for their involvement in the movement. And the state of Israel, whose only intention is to end the movement once and for all, is being widely criticized for doing so. Yet at the same time, the BDS movement, which is even more harmful than Israel’s declaration of Hebrew as its official language several months ago, rarely receives any criticism. And it probably never will.

As a student in modern orthodox yeshiva in the vicinity of the metropolitan New York area, also referred to as “Jewtropolis” in a recent hate crime, I am required to attend numerous lectures each year presented by activists from the organization StandWithUs, which directly fights anti-Semitism across the world. Our undivided attention is required as they explain how to deal with BDS on college campuses, how to avoid it, and most importantly, how to end it. The presence of BDS is unlikely to be a material factor for non-Jews when selecting the university they wish to attend. Even if universities advertise the lack of the movement’s presence on campus, as some universities do, anti-Semitism always finds a way, as prevalent in the recent Pittsburgh shooting. A flame can rise anywhere, at any time.

The recent withholding of recommendations to universities in Israel from the University of Michigan has affected my community on a personal level. Jake Secker, one of the victims involved in this intolerable behavior, relished his childhood here in my hometown of Great Neck, N.Y. In Great Neck, a town with a predominantly Jewish population, incidents of such are condemned and condoned on a communal scale. Secker, as well as the other student whose recommendation was withheld prior, is not deserving of this. The fire always continues to burn.

The recent incident of Laura Alqasem is an example of the most significant, and most controversial, effort to end the BDS movement, which ultimately failed. Alqasem herself is someone with many contradictory intentions: she wishes to study in Israel while giving her continued support to Justice for Palestine. Her actions echo those of one of the founders of the movement who attended an Israeli university only to boycott that school years later. Israel, therefore, detained her to prevent her from potentially becoming a major leader in the movement. But they failed at their own motive. Alqasem was released to set off her own chain of fires, leaving the government to put the fires out.

Alqasem’s detainment received much criticism and controversial attention. There are many who believed this containment was a step towards a less democratic society, and they may be right. But they may be wrong.

Here in our very own United States, everyday travelers in airports across the United States are seldom required to go through additional screening and are detained in security longer than anticipated and reasonably necessary. If this person is suspected of being a criminal, they are detained for a significantly longer period of time. But the United States is still a democracy. Therefore, why must Israel be so heavily scrutinized for protecting itself with similar practices?

Like Hawking, I have noticed a pattern in our universe: those who dream of studying and residing in the state of Israel are deterred from doing so, while those whose intentions are to disrupt the Israeli government and humiliate the country are permitted access thanks to their widespread support. Similar to Hawking, I have composed a hypothesis: anti-Semitism and the popularity of the BDS movement are on the rise, and it is only getting worse from here. Hate is spreading like a burning fire. And we are the ones who have to fight it.